As someone who puts a lot of thought into evaluating TV shows and propounding their virtues, I have a hard time admitting this monumental truth: most TV is trash.

There’s no point in trying to put a positive spin on it. A lot of shows can’t even manage to be entertaining in the moment, and the ones that do only manage to be just that—entertainment. Good for a laugh and soon forgotten.

And then, every once in a while, TV gives us something that reshapes the entire landscape. A show comes along that gives us delight, but also spreads its DNA far and wide not only into other entertainment, but into the entire cultural dialogue.

Suffice it to say that society is still feeling the aftershocks of Cheers.

What Cheers did differently

From the 1950s well into the 1980s, nearly every TV comedy was oriented towards the home. A sitcom was a show about a family, or, in some cases, two families. And the situational comedy revolved entirely around the quirkiness of being a family in the modern world. To maximize comedy, the role of each family member was simplified into unrealistic caricatures. The fathers were boorish oafs, the mothers were high-strung and ineffective, the children were unbridled wolves that bickered and mewled and pined after artificial love interests.

The result was a homogenized landscape that was mostly unfunny and pilloried the important institutions of home and family.

Sadly, we have not entirely bucked this trend, even though many years have passed since it was considered inviolable.

Cheers was not the first TV comedy to take itself out of the home (M*A*S*H, Mary Tyler Moore, and other shows had already broken us out of that box), but it may have been the first to deliberately throw stones in the other direction. For once, we had a bunch of single people who were oafish and terrible and miserable, yet lovable. There was no constraint forcing the show to “keep the family together”, meaning that characters were allowed to hate and resent each other, betray each other, and choose never to forgive one another. So when they did more or less get along, the emotional impact was that much stronger.

But such general observations will not do this show justice. The greatest strength of Cheers is in its details. Let’s examine as many as we can.

If you’ve never heard the opening song of this show, then do yourself a favor and listen now.

It’s infectious. It’s addictive. It…has almost nothing to do with the actual content of the show. But as far as marketing tools go, it is diamond-studded gold.

The closing theme is a soft jazz throwback of the opening, which also has its own charm. As for the interlude music that played between scenes…eh, it leaves something to be desired. But by the time you hear that, you no longer care, because you’ve already been hypnotized by the opening sequence. It’s required reading material for anyone studying how to make a successful TV show. Sadly, few have managed to replicate it.

Cheers was a star maker, launching the careers of many and amplifying the trajectories of others. The reason for this is no mystery: the characters of the show were so well written and executed that it was impossible for the actors not to get noticed. If you watch this show, you will fall in love with someone—and usually someones—and even without the breathtaking opening sequence, that’s a recipe for a home run.

And speaking of home runs, the first character that needs examining is that indispensable ex-baseball-player turned bartender, Sam Malone. 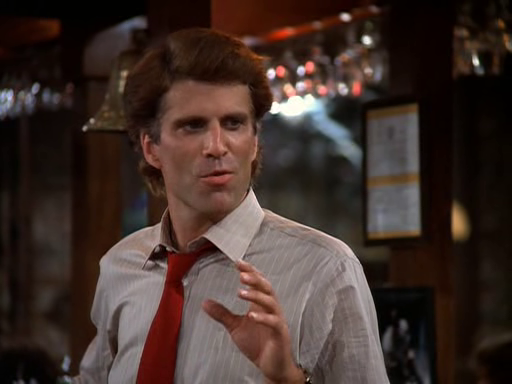 A stone-cold player and a loveable rogue, Sam is a recovering alcoholic and, somewhere in his mythic past, a legendary ladies man. Somewhere along the line, the party ended and he found himself in the real world, where disappointments and heartbreak not only exist, but are common.

He approaches it all with his own brand of deluded pluck, honestly believing that he’s better off now than he ever was before. So he crashes and burns in ever-escalating ways, making for some explosive comedy, as it becomes more and more apparent that only true love and lifelong commitment can save him. This fact is at the core of his character arc, as each hardship humbles him yet further until he is ready to accept someone completely into his life. 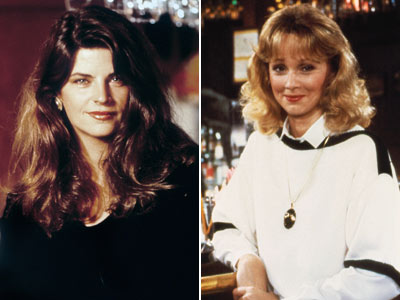 The show ran for many years, and picked up some new faces, as well as dropped some off.

Diane was naive, trusting, vulnerable, yet fiercely dignified, which made her the perfect comic foil for Sam. Every time she attempted to vaunt her superior intellect, she ended up the butt of the joke, though she made a habit of not letting the other characters bail her out of her own problems.

With Diane’s departure, Kirstie Alley was added to the cast to provide balance to the roster, though her character, Rebecca, did not truly shine until the show’s writers gave up on trying to shoehorn her into being Sam’s love interest. In the end, she became something of a comic antagonist to him, splashing cold water onto his delusions while he perpetually foiled her attempts to assert herself as the bar’s owner.

Each of these women was strong enough to keep the rope taught in the show’s tug-of-war between characters. The result was a perpetual state of tension that never let the story get boring. 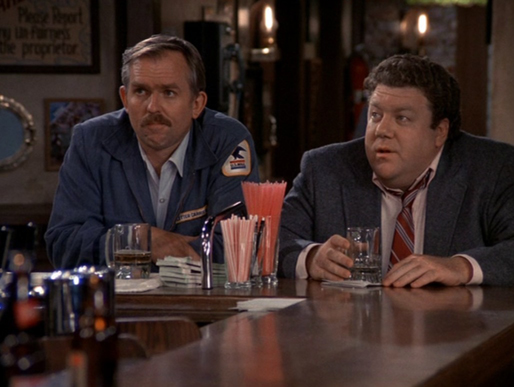 Not your typical barflies. Cliff is a pseudo-intellectual postal worker ready to dispense gossip as if it were hundred-year-old folk wisdom. His hypnotic Bostonian accent makes it impossible not to pay attention to him, and once he has your focus, he bludgeons you with humor.

Norm is an alcoholic who may be the most important character in the show. The title song—you know, the one that promises a place “where everybody knows your name”—may be specifically referring to him, as he is such a regular customer at the bar that everyone can’t help but shout his name every time he enters. So far down the drain that alcohol is both his prison and his only salvation, his dose of reality added to the show gives it a melancholy that keeps the whole thing from becoming frivolous, yet provides some of the biggest laughs the series has to offer. 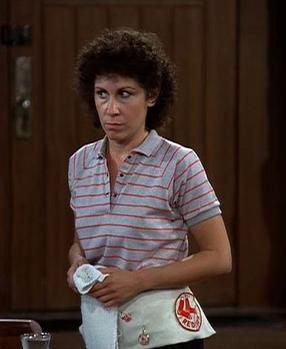 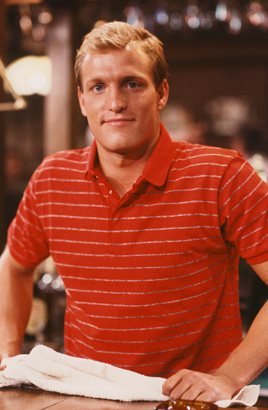 Carla is the shrewish but cunning master of all things legally grey, and Woody is the folksy, wide-eyed farmboy who was added in season 4 to balance her out.

The both of them are a lot of connective tissue that helps keep the show from suffocating in Sam’s personal dramas. Carla is a mother who has learned how to be the David in every David vs. Goliath battle she has to face. She has no illusions and is not blind to the seedy underbelly of Boston and of the bar itself. She’s funny because she lacks all pretentiousness and is honest to a fault.

Woody is strong and courageous but not quick witted. He is funny because he is unable to see anything for what it is and is swept up in the belief that the people around him really are as amazing as they pretend to be.

Far from being relegated to comic relief, they each have their own arcs and relationships, which cause stress to the people around them and (once again) allows the show to take a break from focusing on Sam. 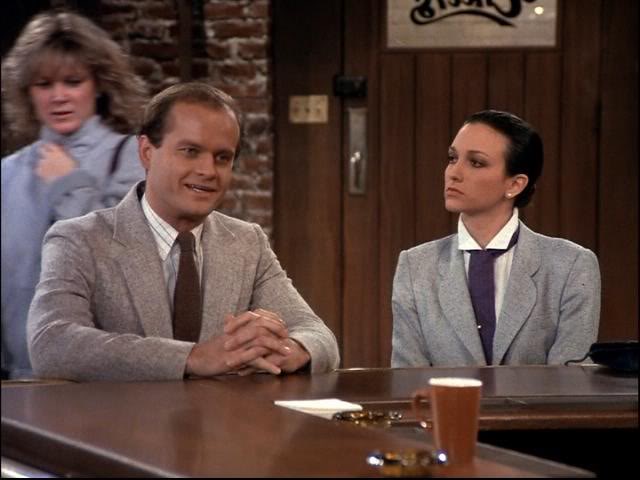 If these people look familiar, there is a good reason for that.

Later in the show’s run, new characters were added to keep things fresh. But where this might have ended with bland, shoehorned-in forgettables, we instead got one of the greatest power couples in TV history, whose combined presence was momentous enough to survive the end of the Cheers universe and create its own.

Dr. Frasier Crane is a psychiatrist with a host of mommy and daddy issues. He spares no effort in living up to the public facade he has made for himself, yet when push comes to shove he becomes a total basket case.

Lilith Crane is a force of nature—something of a cross between the Wicked Witch of the West and Queen Elizabeth I. The world runs from her but never quite escapes her wrath. If Cthulu wore high heels, he would be married to Dr. Frasier Crane. 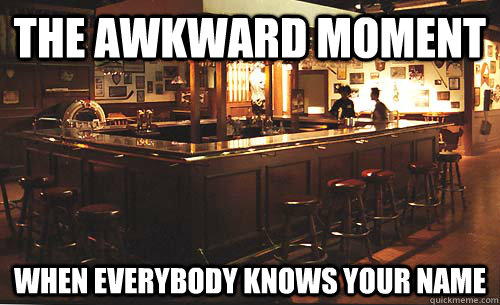 Perhaps the show’s best aspect was how it portrayed the cultural cross section of Bostonian life. The bar where the show takes place caters to an eclectic clientele. One one end, you have characters like Diane and Frasier, who are well educated, well read, and well spoken, yet klutzes at heart. On the other, you have Cliff, Norm, and Carla, for whom a comfortable life is all but impossible, but who are strong in ways only the school of hard knocks can teach.

Between these extremes is everyone else. And the show’s humor comes from the friction, as all these stratified layers learn to bond and even love each other. This endowment of mirth and charm together is likely what gave the show legs and causes it to still be relevant today. 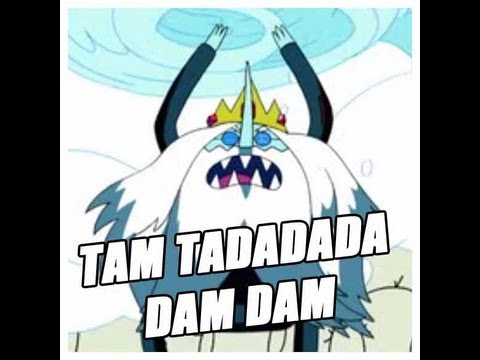 Whether or not you’ve ever seen the show, you have been influenced by it, and the things you enjoy on TV likely owe a great debt to Cheers.

From its equally-perennial spinoff, Frasier, to all the shows it has influenced, ranging from Friends to the The Big Bang Theory to its most faithful spiritual offspring, It’s Always Sunny in Philadelphia, this show is everywhere.

There are a lot of people in my generation and younger who are quick to write off this show as a fossil. But it’s not a fossil; it’s a monument. So much of our current programming is tied together in the roots of Cheers, and you are severely missing out if you don’t give it more than one look.

Cheers is essential. It will never lose its luster. If you’re looking for a long project, one that will keep you happy and laughing for weeks on end, then watch it on Netflix. All 11 seasons are currently on tap there. Watch it with a loved one. Watch it when you’re having a bad day. Steal jokes from it to tell your friends. Have fun.

You’ll be glad you did.

One thought on “Netflixing: Cheers”