“Beware of advice—even this.”
-Carl Sandburg

Standing on the Shoulders of Giants

I like quotes. Not only do they provide good advice, but they lend an air of authority to your arguments (although this only works on people who respect said authority).

Quotes can also be fun. They can be witty or biting. And people who are good at making them have a better chance of being remembered.

And in the age of the internet, they are not hard to find. Why, I think this may be one right here: 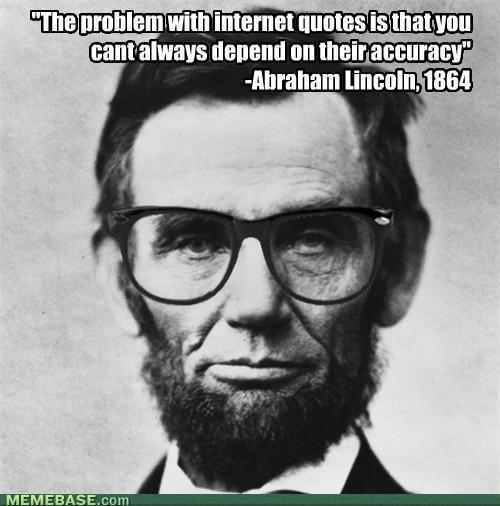 HOW DARE YOU DISAGREE WITH ABRAHAM LINCOLN!!!

See what I mean?

And, in a brilliant coincidence, most quotemakers are writers, and, therefore, a lot of quotes are about writing.

This is wonderful news for all people who want to make their writing better. As it turns out, the world is full of advice on that selfsame subject. Naturally, there are no bad consequences or side effects of having such a deep well of knowledge from which to draw writerly wisdom.

Thanks to the advice of ages past , we are standing on the shoulders of giants, but what are the giants standing on? And why, if these giants are so great, can they not agree on anything?

Let me give you an example:

“Don’t be ashamed to use the thesaurus. I could spend all day reading Roget’s! There’s nothing better when you’re in a hurry and you need the right word right now.”
-Susan Orlean

“Never look at a reference book while doing a first draft. You want to write a story? Fine. Put away your dictionary, your encyclopedias, your World Almanac, and your thesaurus. Better yet, throw your thesaurus into the wastebasket.”
-Stephen King

And here’s another one:

“A writer doesn’t need to go out and live, but stay home and invent.” -Ned Rorem

“You can’t write a story that’s got any life in it by sitting at a writing table and thinking. You’ve got to get out into the streets, into the crowds, talk with people, and feel the rush and throb of real life—that’s the stimulant for a story writer.”
-O. Henry

Which of them is Right?

What good is advice if it is not consistent? Well, perhaps it is easier to make sense of all the contradictions once we understand their cause.

I have several ideas on the subject:

1. There’s bound to be differences of opinion. All art is greatly subjective, and writing is no exception. Many answers will depend upon the context of the situation. And some advice only applies to certain kinds of people.

2. Someone may be wrong. Being famous does not make you infallible, and writers are not gods. It is not unthinkable for one or both parties to be incorrect. The idea that all advice is subjective is, itself, subjective.

3. The two quotes may not actually be talking about the same thing.

And this last possibility is the one I want to examine in detail. I believe it may illuminate the essential problem with advice.

When I began reading a lot of writer’s quotes, I encountered something I like to call “The Great Contradiction”.

It has to do with perhaps the most essential principle of the craft: actually doing the writing.

“Not a wasted word. This has been a main point to my literary thinking all my life.”
-Hunter S. Thompson

“[A writer] is like a surfer—he bides his time, waits for the perfect wave on which to ride in.”
-E.B. White

“My first draft is the last. I must perfect each sentence madly before I go on to the next.”
-Cynthia Ozick

They give you a pretty good idea of what it takes to actually write a book, don’t they? But before you make up your mind, read these other quotes:

“Don’t get it right, just get it written.”
-James Thurber

“The best advice on writing was given to me by my first editor, Michael Korda, of Simon and Schuster, while writing my first book. ‘Finish your first draft and then we’ll talk,’ he said. It took me a long time to realize how good the advice was. Even if you write it wrong, write and finish your first draft. Only then, when you have a flawed whole, do you know what you have to fix.”
-Dominick Dunne

“I think I’ve been…trying to calculate and figure too much. I’ve stopped that now and am trying not to worry and just let it come out, because apparently it is all there, in your mind, in the subconscious, and the trick is to throw your conscious mind out of gear and just let it flow through.”
-James Jones

Confusing, right? And I have to admit, I was a bit perplexed that so many successful authors across time had such a hard time coming to consensus.

And how was I, an author up-and-coming, to proceed? Should I painstakingly craft every sentence, never wasting any words or vomiting on the page? Or was I supposed to let the writing flow, get a first draft done and have something finished in my hands?

It’s been a while since I figured out the truth behind these questions, but I still feel at times like I need to be reminded: there are two sets of rules.

There are two sets of rules.

When you are brainstorming, outlining, and firstdrafting, the goal is to get a finished product–a fat bundle of papers you can give to someone. This requires you to instantly forgive every mistake you make and move on. It’s hard to do, apparently even for veteran professionals, but it is absolutely necessary. Otherwise, you’ll move too slowly to become prolific. You might only publish one or two books in your entire lifetime. You’ll still be a writer, but you’ll be a writer no one remembers or reads. And that, at least for me, is an unacceptable final outcome.

Once you have finished a first draft, then you can start obsessing over correctness. You can polish the story, baby the words and syntax, and spend sleepless nights wondering how to fix all the problems with the book. But because you are not actually writing the book at this time, you can live out most of your compulsions without wasting all your time.

That’s why you have quotes supporting each paradigm, and they do not really contravene each other (except perhaps for the Cynthia Ozick quote). Every one of the above authors is passionate about their position, but at what times were those quotes taken? None of these soundbites encompass their author’s entire book-writing process. If they did, I believe the quotes would espouse both positions as being necessary.

And therein lies the danger of advice. So, resonating with Carl Sandburg, I will tell you to take all advice with a grain of salt, including this blog post.

(Special thanks to Jon Winokur, of AdviceToWriters.com and @AdviceToWriters. The only reason I know so many quotes about writing is by following him. You should be doing the same. The other source of my quotes is Wikiquote, which is nice, but also has quotes unrelated to writing.)

The Evil of WeaknessBuckle Down and BlogIt's a Bad Weekend to Be ...Netflixing: Bob's Bur...The 3 Joys of Reading