I never thought I would find an anime series I love more than Bleach.

Yet here we are. 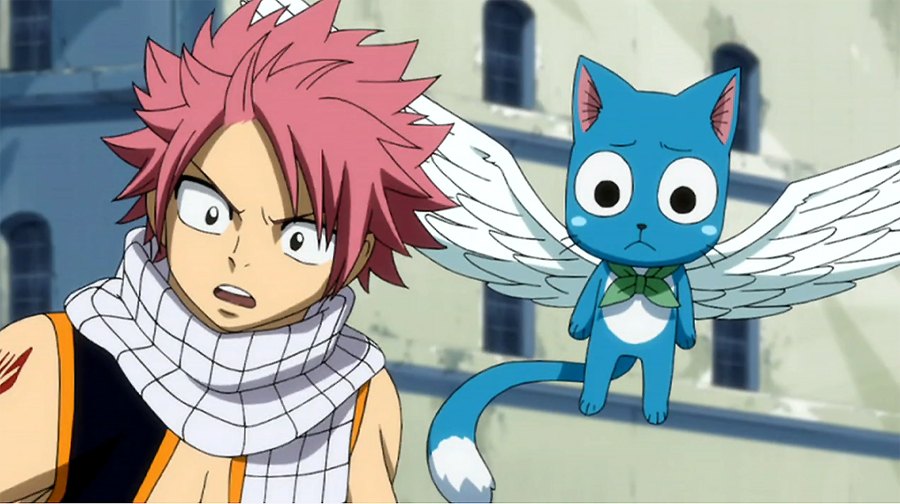 But I’m getting ahead of myself. Judgment comes last. Information comes first. 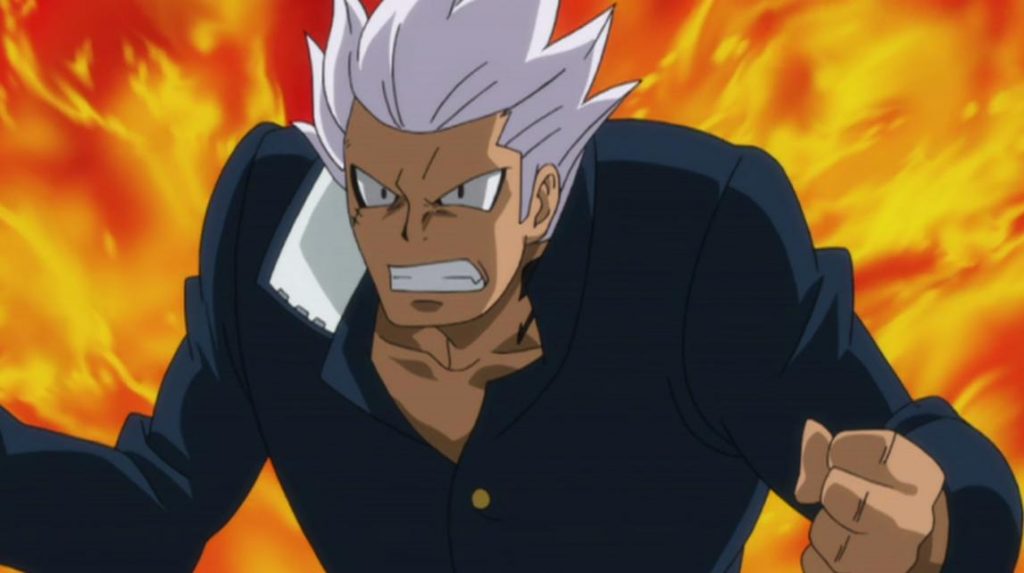 I watched this show with the original Japanese audio and English subtitles. I did not at any time listen to it with English dubbing, and cannot comment on the quality of the dub. If you watch the show in English, you may have a different experience than I did. 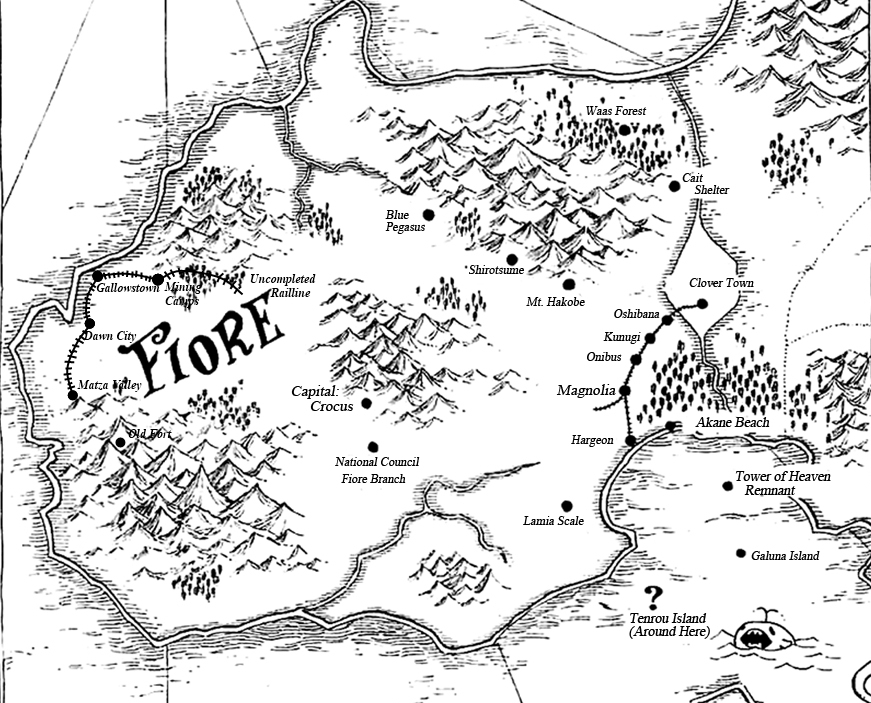 Fairy Tail takes place in the mythical kingdom of Fiore, where magic abounds and is part of people’s everyday lives. Those skilled enough to be employed as magic workers are called “Wizards”, and the best way for a wizard to earn his living is by joining a wizard guild and taking quests.

Pretty standard RPG fare, really. But not all is well in Fiore, as magic can be used to oppress and destroy just as easily as it can be used to help and bless. Dark guilds of disgraced wizards offer their crime-committing services to the highest bidder. Cults of forbidden magic seek to reestablish evil practices in the realm. Thieves and assassins target legitimate wizards to serve their personal vendettas. And Era, the supreme council of magic, ostensibly protects the public while serving their own agenda.

Luckily, among all the wizard guilds there is one that reliably produces powerful and famous wizards whose adventures are heralded far and wide. This guild is called “Fairy Tail”, and it is the home of our heroes. 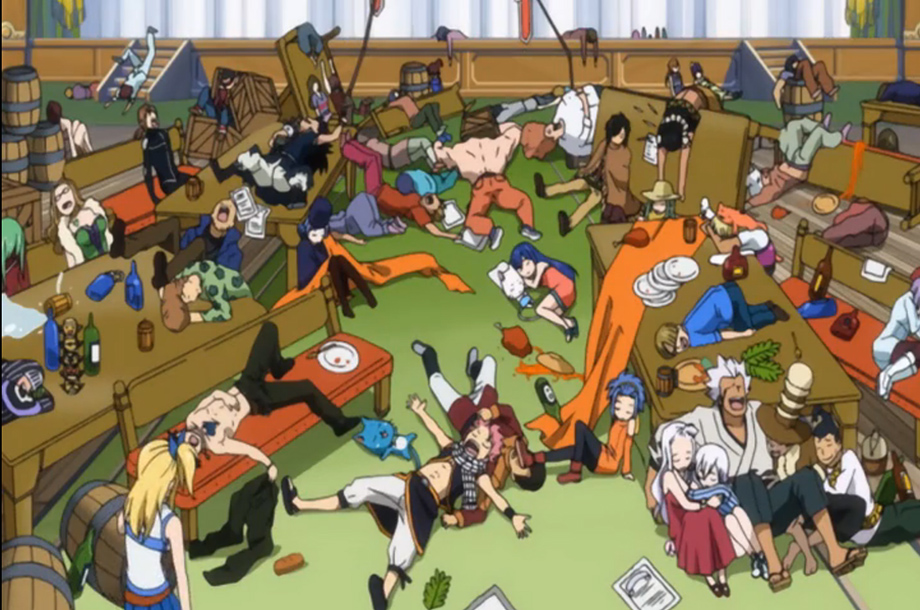 Not known for its sense of professionalism, the Fairy Tail magic guild is little more than a pub where powerful wizards gather and get into heated arguments. The daily brawls may be a bit taxing to the employees, but they wouldn’t have it any other way.

That they keep producing powerful wizards is a bit of a puzzle, even to the members themselves, as none of them are trying to become legends. They’re just trying to have fun and get paid at the same time.

And this, perhaps more than any other thing, is what drew me into the story. A lot of workplaces in the real world could stand to be a little more like Fairy Tail. There’s little sense of camaraderie and an overbearing shadow of rules and regulations in most modern offices (if you’ve ever worked in government, then you know what I’m talking about).

Fairy Tail is my dream job. Nobody worries about how grown up you act or frets about hurting each other’s feelings. Going on adventures and beating up bad guys are the order of the day, every day. Plus, you know, the people there have magic.

Inbetween the long, multi-episode arcs where the heroes are fighting for the future of their guild, their town, or the world, they spend a lot of time relaxing, exchanging insults, and pranking each other at the tables in the guild hall. It may not be glamorous, but it’s a living. 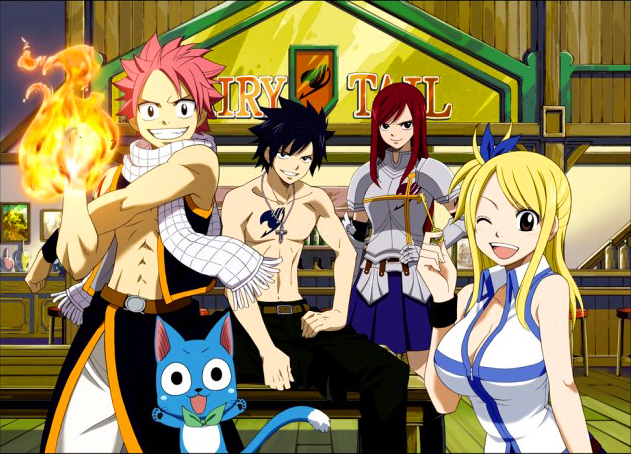 The world of Fairy Tail is dominated by the use of magic, but the number of different magic systems, each with its own rules and limitations, reaches Sandersonian extremes as every member of the extended cast is given their own specialties.

The overall ensemble are all worthy of specific mention, but in a brief blog post I can only give justice to the central nucleus of heroes. 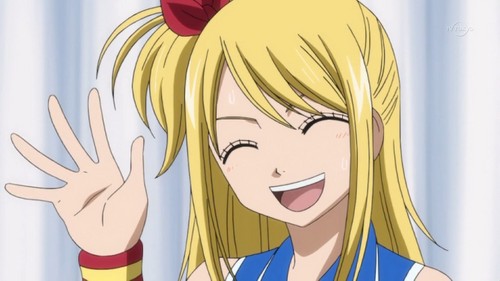 A new recruit to the Fairy Tail guild, Lucy is the master of summon magic and has the ability to call forth the celestial spirits of the constellations to fight on her behalf. Overeager and a little shy, she is quite taken with the charms of the guild and finds that she has never felt more at home.

While she doesn’t see as much action as the rest of the heroes, she is a powerful wizard in her own right, and manages to quickly dispose of anyone who underestimates her. 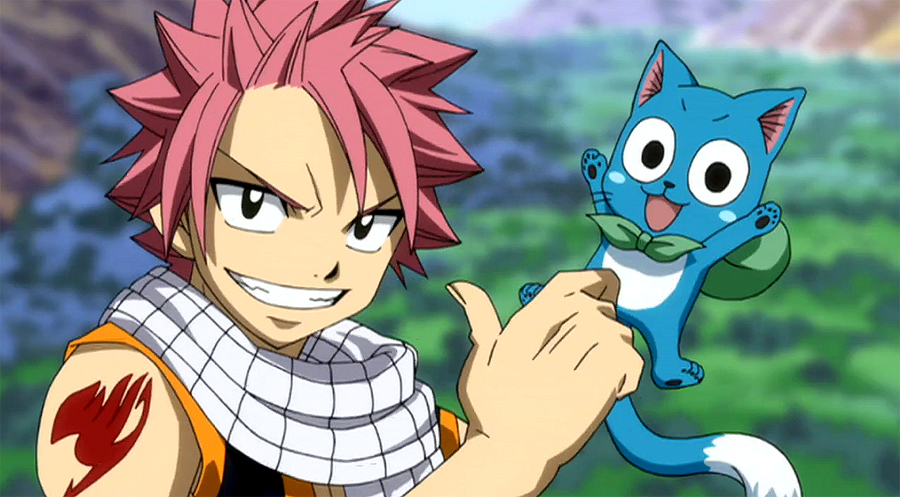 Natsu is a particularly rare type of wizard called a “Dragon Slayer”, who use spells and techniques that can only be taught to humans by dragons, and which historically have been used to hunt dragons. His element is fire, which he can eat to energize himself, or manipulate in a thousand different ways. He is always pitching for a fight and constantly trying to prove that he is the strongest member of Fairy Tail.

But he can’t ride in a car, or on a boat, or on a train, or with a jet pack, or in any other kind of vehicle, as he suffers from acute motion sickness.

Happy is a cat who claims to be a member of Fairy Tail, even though the only magic he possesses is the ability to grow wings and fly for short periods. He can take passengers, but only one at a time. His obsession with fish is his undoing, and he follows Natsu everywhere, providing sarcastic commentary when it is least welcome. 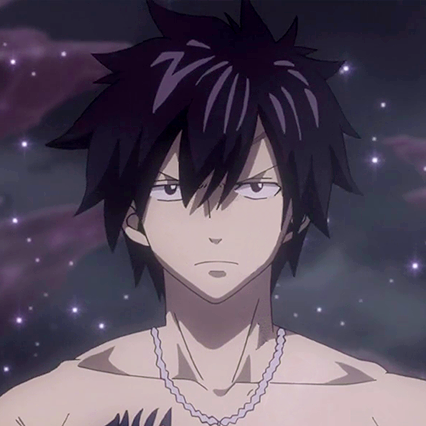 A powerful ice wizard who is constantly butting heads with Natsu, out of a desire to take him down a peg and force him to be more serious about work. Would be the team’s designated buzzkill, were it not for the fact that he suffers from a nervous compulsion that causes him to strip off his clothes and then forget that he has done so.

Disciplined to a fault and more powerful than he lets on, Gray anchors and balances the team during important missions. 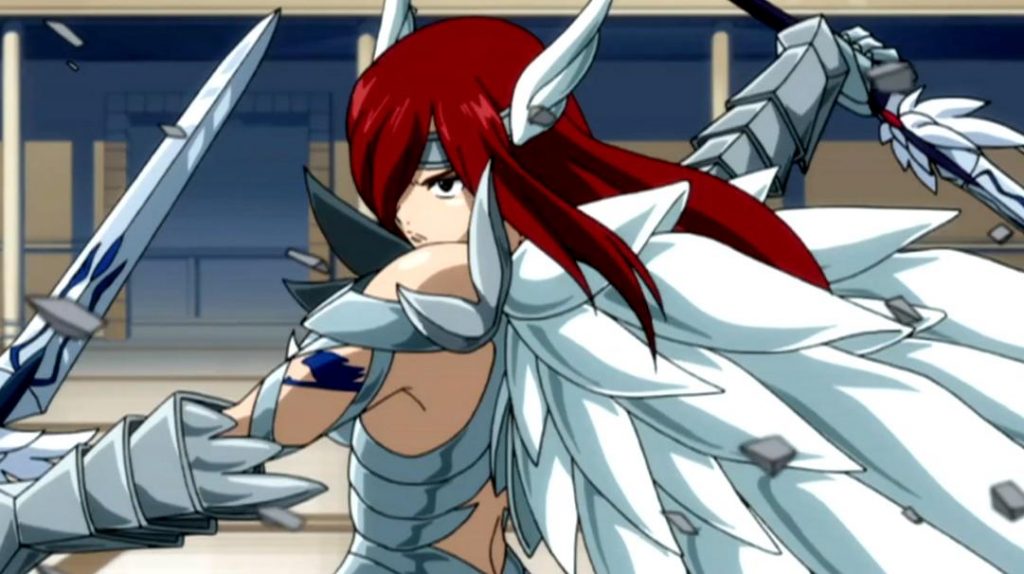 Most powerful woman in the guild. Erza has the most diverse magic set of the main cast, as her powers revolve around sets of magically enhanced weapons and armor that she can change between instantly with a thought. Ever the disciplinarian, she is often called upon to keep the other heroes in line by force, because force is her first and last resort. 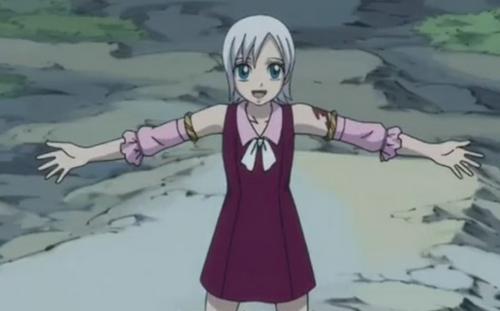 In typical anime fashion, all of the characters have their own tragic backstories that tie in with the perils that befall the kingdom from time to time. Many of these are revealed throughout the course of the first season and I was surprised at how touching they could be. And they’re woven seamlessly enough into the story that they don’t become jarring.

None of the characters are made disposable, and they all come to show their true worth as the series progresses. 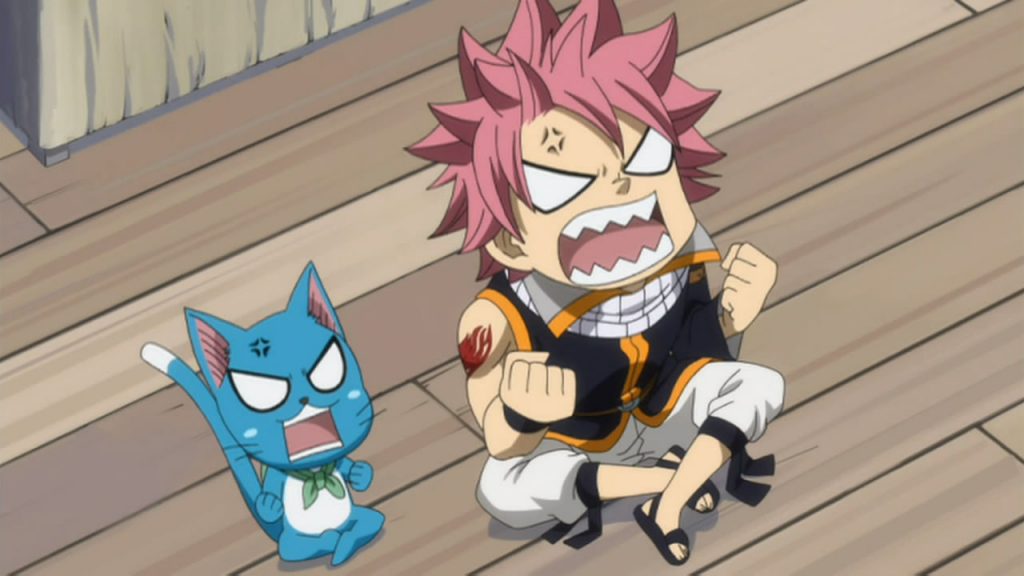 The first episode has a nice prologue that serves as a basic introduction to the world. That prologue then reappears for TEN MORE EPISODES.

After that, the prologue is replaced by a televised warning, by Natsu, instructing the viewer to watch the show with the lights on and sitting away from the TV screen. I’d love to lecture the showrunners about how watching TV in the dark does not cause vision loss (that’s just an old wives’ tale that has been scientifically disproven), but I don’t have the time, or their contact information.

Needless to say, but cartoons are not a good place to put PSAs. 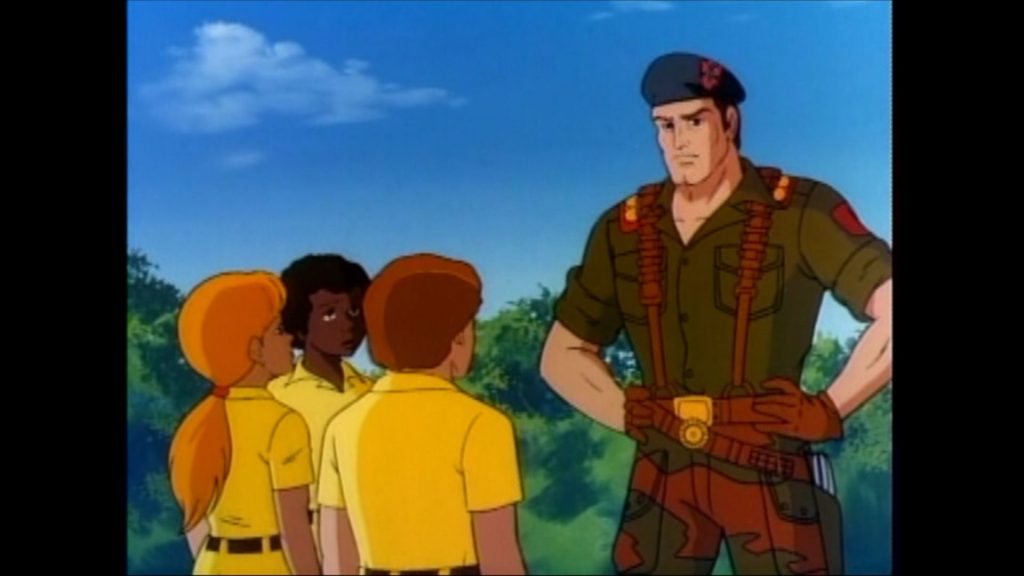 Fairy Tale is my new favorite anime. Only one season (though that season has a hefty 48 episodes) is available on Netflix. And, though I’ve never done this before with a Netflix show, I am willing to seek out whatever means I can to watch the rest of the series. It is that good of a show, and I don’t want to miss a minute of it (though I hope there’s not a lot of filler episodes down the line).

If you are at all on the fence about this anime, then I would implore you to give it a chance. It’s beautifully drawn, delightfully down to earth, and has a great soundtrack, too (a lot of gaelic instruments to emphasize the pseudo-European setting, and some spiced up arrangements of recognizable classical music punctuate the storyline).

Available for a Limited Time

And you had better hurry, because for the first time ever my Netflix app has done its job and informed me of an upcoming expiration.

Fairy Tail will disappear from Netflix on November 12, 2016. There’s no telling when or if it will come back. Do yourself a favor and prioritize it in your queue.

If you miss it, you will be missing out on something special.