It’s a show that often gets overlooked.

It’s a show that has a lot of talent.

It’s a show that, for a long time, stayed alive by leaning on other, better shows.

If you need any more hints, then you probably have never seen 30 Rock. 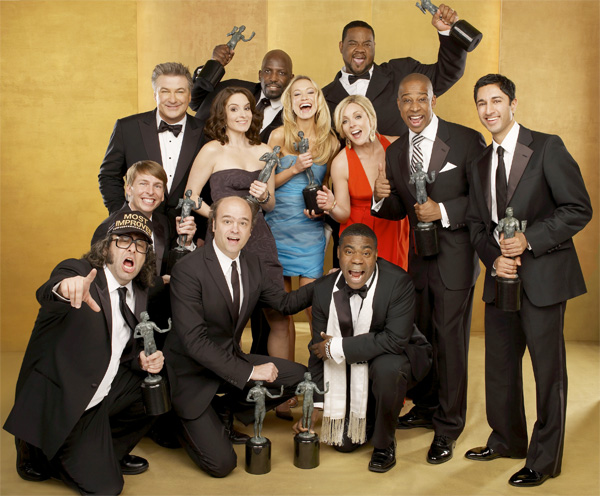 And no, it is not a 3rd Rock from the Sun spinoff.

Where it Fits in the Hierarchy of TV Comedies

30 Rock is a bit of an oddity. The brainchild of Tina Fey, produced by Lorne Michaels, and starring Alec Baldwin, the entire show comes across as a highly experimental offshoot of Saturday Night Live, except that as you watch the series you realize that it’s actually a modern (relatively) take on the same theme that was tackled by Murphy Brown back in the 90s.

Specifically, it’s a sitcom whose approach to humor involves namedropping current events and issues that were topical during the time of its run, coupled with the primary perspective of a female professional working and living among such real-world events, and, as such, can’t help but feel a little dated, even though the series ended only a few years ago.

Where 30 Rock differs from Murphy Brown is in the setting. Tina Fey’s character, Liz, is actually living out Fey’s real professional life at the real NBC offices, located at 30 Rockefeller Center in New York City (hence the show’s title). The character of Liz is a writer and producer of a comedy variety program that airs once a week on NBC, and is as thinly veiled as a parody of SNL can be.

The central conceit is that NBC is a crazy place to work, and that there is just as much humor happening behind the scenes as you would normally see in an episode of an NBC comedy show.

How well does it work? Well, read on.

The Parts that Work 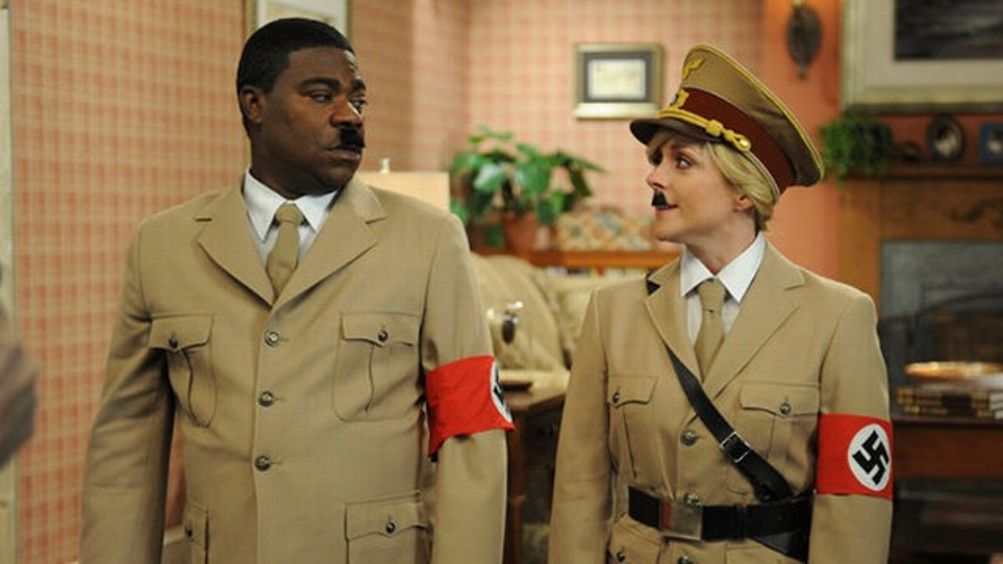 One aspect of this show that is utterly unimpeachable is its “Take No Prisoners” approach to topical comedy. There are no sacred cows, no egos so large that they are too big to fail, and anybody can end up as the butt of the joke, especially NBC itself and its real-life parent company, General Electric. Celebrities of all stripes are lampooned. Politicians on both sides of the aisle get pies thrown at them. The humor in this show does not protect anyone.

Fey’s character is not immune, either. She is not made to look heroic or pure in the face of the evil corporate bigwigs, and is often the one learning the lesson from the people in the suits about having to live with the world as it is, not how she would like it to be.

The show also hosts a shining star in the form of Jane Krakowski, who plays Jenna. Obsessed with attention, there are no depths to which she will not stoop for applause and recognition. And her vapid disconnection from acknowledging reality or the horrific consequences of her actions make for some surreal comedy.

The show also maintains a decent character balance, setting domineering alpha male Jack Donaghey (played by Alec Baldwin) against Kenneth the Page (played by Jack McBrayer, who you may know as the voice of Fix-it Felix, Jr.), with Fey’s Liz Lemon caught squarely in the middle of the balancing act.

So it’s not like this series doesn’t have a lot going for it. But there are issues which, sadly, are unavoidable.

The Parts that Don’t Work 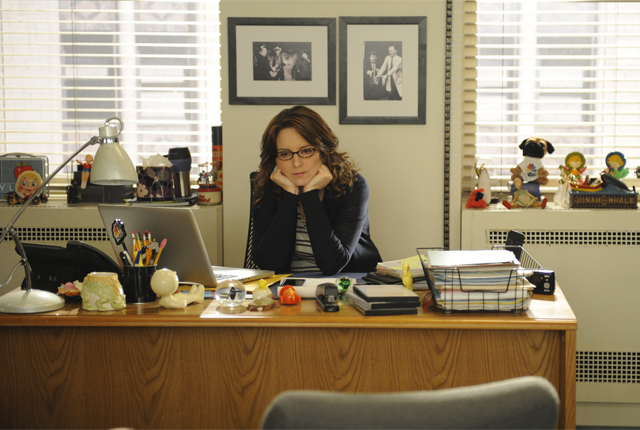 As stated before, this series feels incredibly dated, and for some reason it’s a much bigger problem here than it has been in other TV shows (even Twin Peaks somehow managed to feel more contemporary, and that show can’t decide whether it takes place in the 50s or the 80s). It’s an inherent danger with stealing your punchlines from the day’s headlines, and I think Fey and co. missed a number of opportunities to make the show more timeless.

But it’s not just the displacement of time that hurts this series. There is also the matter of its humor being highly specific to one place—that place being New York City. The humor seems tailored largely to people who already have the quirks and nuances of that town wrapped up in the rhythm of their lives, and the universal appeal of the show suffers for it.

In fact, a lot of jokes seem specifically targeted towards people who actually work at NBC, which I’m sure earned the show some smiles and jeers from its circle of friends and coworkers, but it leaves the bulk of the audience in the dust. If your target audience is people who work for one specific company, you’re not doing TV right.

But all that could be forgiven, where it not for the lazy shortcuts that are taken in the character writing.

I did say that the show makes a decent effort to balance the characters against each other. Unfortunately, it seems to believe that the only way of doing this is to flatten everyone in the show into caricatures, each one pushed out to the most extreme ends of the seesaw. Jack is the definitive CEO boss man. Liz is the definitive down-on-her-luck working girl. Frank is the definitive slacker slob. Etc. Etc.

Despite the fact that multi-episode story arcs run throughout the entire length of the series, almost no character growth occurs. These people relive the same dysfunctions, over and over and over again. This only changes in the last season, but by then it is too little too late. For comparison, The Office is a comedy that takes place in a professional environment full of dysfunctional adults, yet each character is multifaceted and is subtly different from season to season, as the lessons they learn over the course of the series accrue and accumulate all the way to the end. 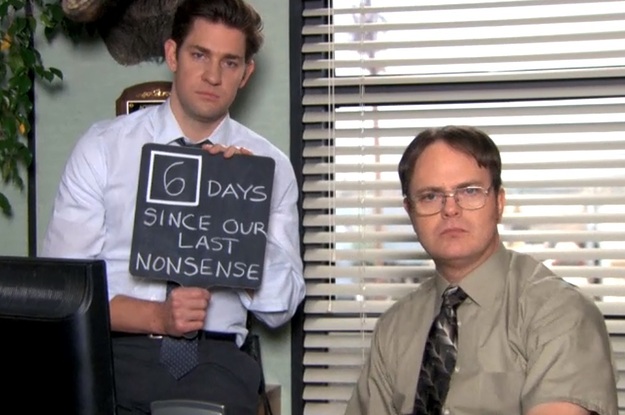 One More Good Thing: The Music 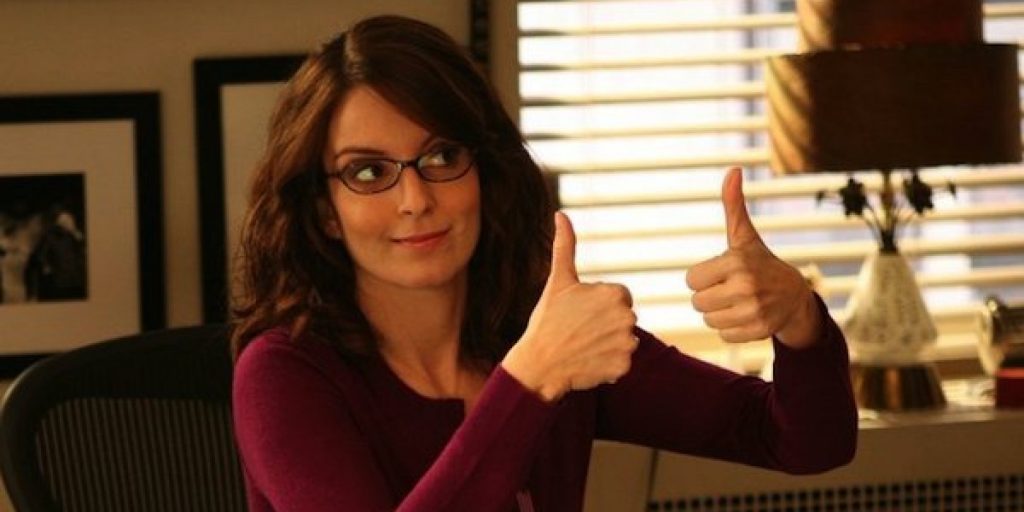 The show does, however, have nice production values, is filmed on location, and has one or two other things going for it.

One of which is the music.

30 Rock was blessed with the musical talents of NBC studios, which provides a custom score to each episode. Not that there is a lot of music to be had across the series (this is a sitcom, not a drama), but none of the music is of the canned or pre-made variety. Granted, they don’t have a full orchestra improvising every scene, like Animaniacs had, but the show does have a small but dedicated band of minstrels, with occasional and intentionally half-baked musical numbers thrown in (“Werewolf Bar Mitzvah” was a personal favorite of mine).

So there are certainly some nice takeaways from the series.

It’s one of the better comedies on Netflix. I mean that.

For all the show’s faults, there is still a lot to be appreciated. Honestly, the best part of this show is the educational aspect. It was written by people who actually know what it’s like to work for a major television network, and, though it often delves into exaggerations, it does portray the challenges and work environment of being a TV writer in the 21st century. I can’t personally tell which parts are real and which parts are played up for comedy (since I have no experience working in TV) but there’s no denying that the series carries an aura of authenticity that probably cannot be got anywhere else on the small screen.

And if you like NBC sitcoms, you’ll probably love it.

All seven seasons are currently on Netflix. Take good look, if you feel so inclined.

One thought on “Netflixing: 30 Rock”

The Writer as Software En...Pre-publication Sacrifice...Netflixing: The Iron ...The Trial, Part 3Hint #13: When You Can't ...