It took me a while to get around to this show.

I was afraid that, due to its association with Marvel’s Jessica Jones, that it was more likely to fall on that side of the Netflix spectrum, rather than on the Daredevil side.

How pleasantly surprised I was. 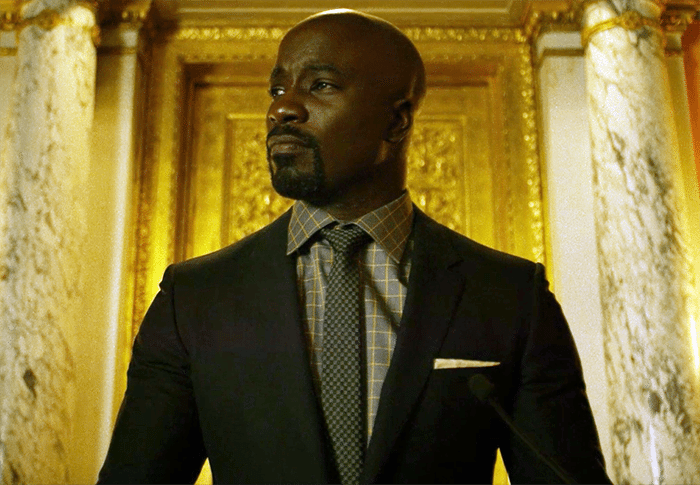 This guy has the power of super swank.

It was nice to see Marvel create something palatable again. I was beginning to lose hope that the upcoming Defenders miniseries would be worth my while.

Luke Cage is a particularly interesting case study in comic book adaptations, due to a number of reasons, not the least of which is that the character is a black man, and so far black superhero adaptations for screens big and small have been, well… 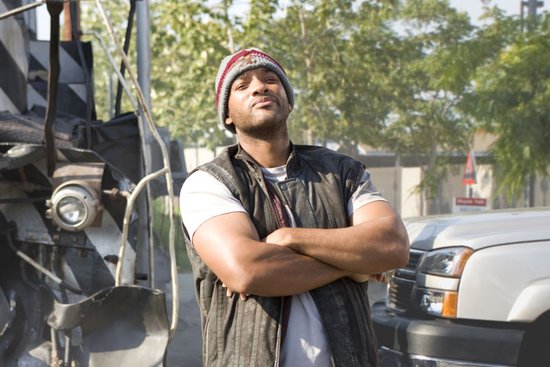 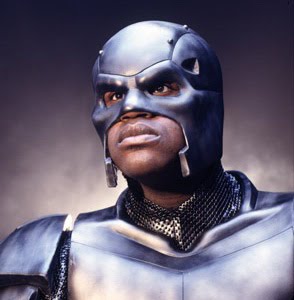 Well, they are what they are, which is to say they are not shining examples of what could be done with the subject. Even Storm, from the X-men movies, is not as awesome as in the comics.

But with the rise of Marvel Studios, there has been a great deal of interest in finally creating a competent adaptation of a black superhero character. Most of this buzz has been directed toward the upcoming Black Panther standalone film, but it seems that film will be late to the party, as Marvel has already released an adaptation that does a stand up job with an African-American, super powered protagonist, in the form of Luke Cage, a Netflix original series.

What They Did Right 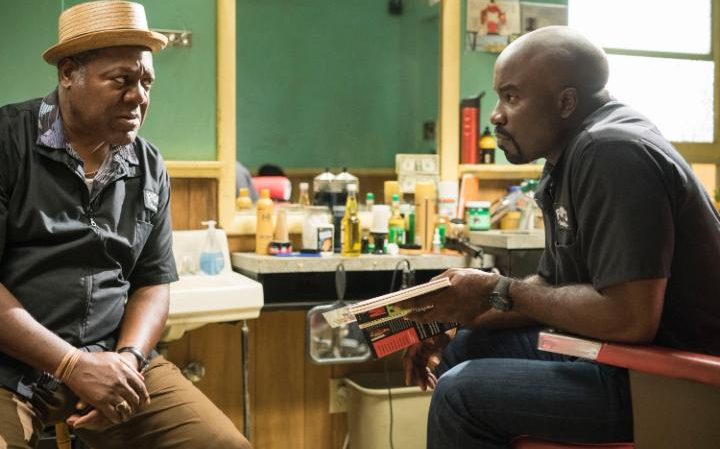 The most important aspect of this series is how it learned from the weaknesses of Marvel’s previous Netflix outings. Daredevil, while at times excellent, tended to languish over unnecessary details and backstory, and Jessica Jones went to a lot of nowhere in a big hurry.

Luke Cage keeps its flashbacks to a minimum. The majority of them are confined to just two episodes—one showcases Luke’s history, the other showcasing the villains’ history. Luke himself is one of the most interesting and relatable characters on the show, and is only slightly outshined by the show’s villains.

And, while the first two episodes had graphic moments, they were tastefully toned down from the garbage we were exposed to in Jessica Jones. This series is surprisingly light on gratuitousness but heavy on story and adventure—much more in line with the Marvel theatrical films.

Let’s examine some of the show’s best qualities.

Whoever wrote the dialogue for this show deserves an Emmy (though I assume they already have one, because this level of skill usually comes from a veteran). It is kept short and powerful, without the fluff and exposition that occurs so often in entertainment, especially superhero stories.

Each utterance is revelatory of the person’s character and gives us a better idea of who these people are, making us care for them. So when bad things happen to these people, we are instantly invested. 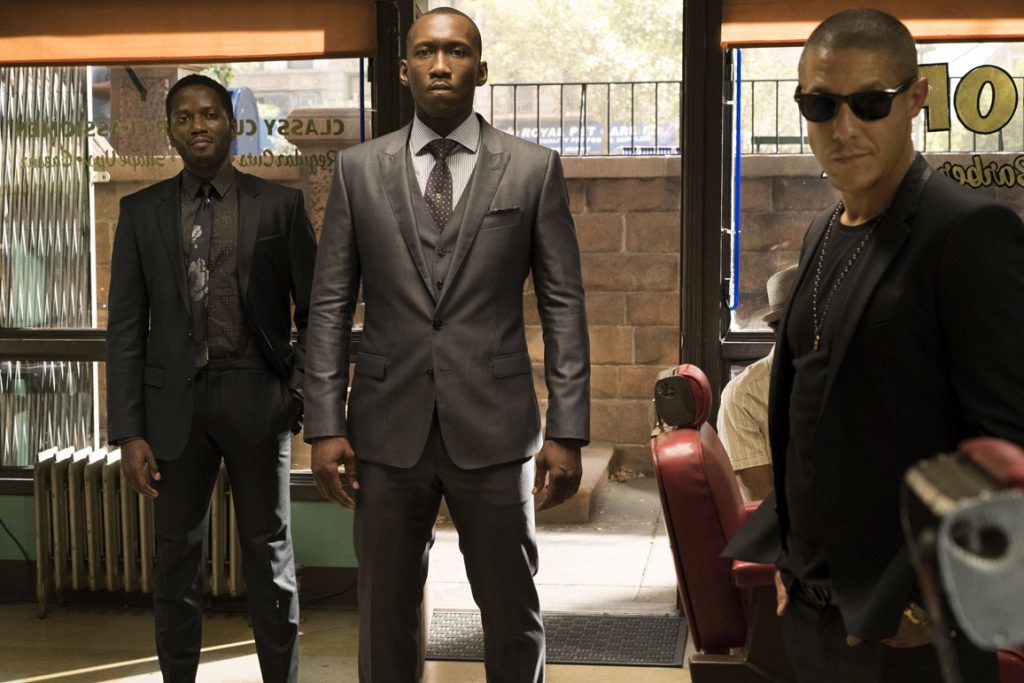 The Luke Cage antagonists are second only to Vincent D’Onofrio’s Kingpin from Daredevil. These are fully realized, egotistical and cunning villains, worthy of the fear they instill in the other characters.

There are some issues, of course. One villain, Diamondback, kind of comes out of left field in the later episodes, and is hurriedly given a backstory to make him significant to the plot. But he makes up for it by being scathingly insane, and the grand fight between him and Luke in the last episode is an appropriate payoff.

But the grand prize has to go to Mariah and Shades, the unlikely power couple of villainy who combine a corrupt and hypocritical politician with a weaselly hit man who is smart enough to plan ahead and even show deep restraint. 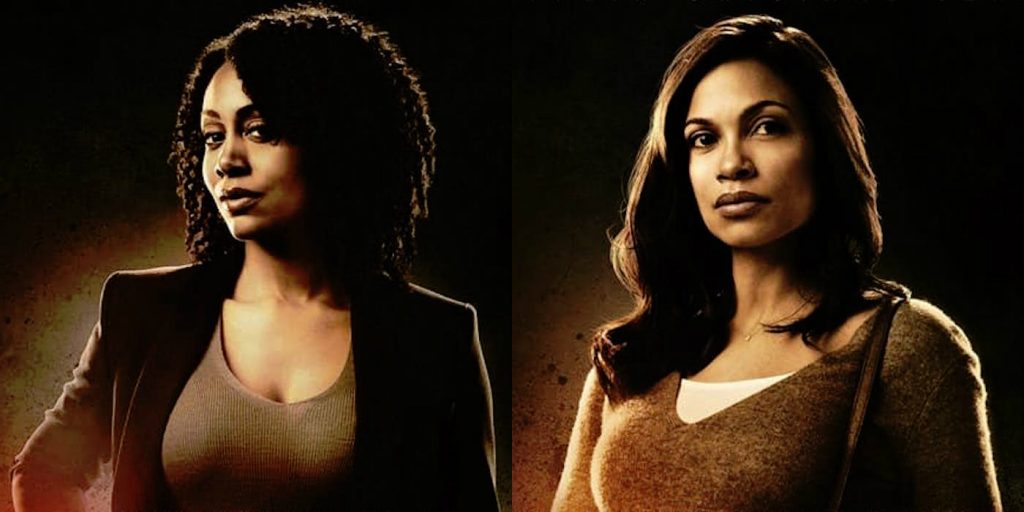 The show gives us a lot of people to root for. Not only is Luke a well developed, strong and stoic hero, but we’re also given Detective Misty Knight as a more intellectual foil to his brute-force approach. Claire Temple (a.k.a Night Nurse 2) also returns as a supporting character. We see more of her life, including the introduction of her mother and a budding love interest between her and Luke.

Minor friends and heroes also abound, in the form of Pop, a kindly mentor figure for Luke, and Scarfe, Misty’s partner who is torn between his secret loyalty to the villains and his admiration for what Luke and other heroes are doing for the world. 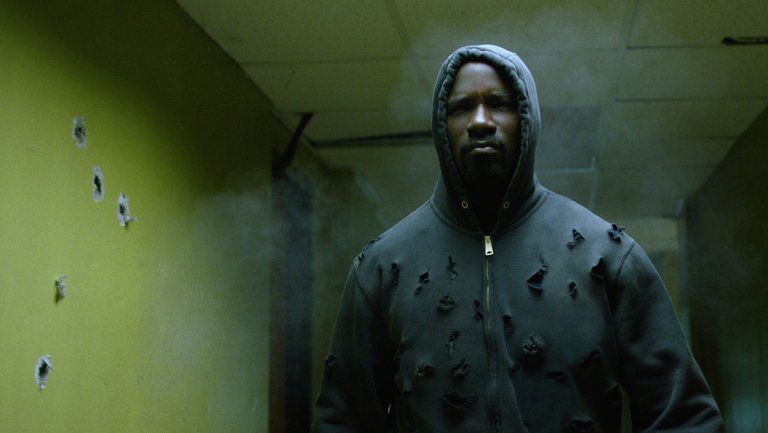 The product of genetic experimentation on prison inmates, Luke Cage is a man with superhuman strength and bullet-proof skin, which is handy when you’re trying to survive the mean streets of Harlem while an organized crime boss is trying to cement his power.

But Luke wants nothing to do with that. He’s happy to sweep up hair at Pop’s Barber Shop, a welcoming place that serves as neutral ground in all the inner city conflicts happening around everyone’s heads. The last thing he needs is to go looking for trouble or stir up any kind of media attention, as he is still an escaped convict.

That all changes when a hit man employed by Cottonmouth (Harlem’s current criminal overlord) violates the neutrality of the barbershop by murdering pop. With the skeptical help of Misty Knight, a cop with phenomenal visualization skills, he sets out to clean up his town and make Harlem safe again.

I don’t want to spoil the ending, but the conclusion of the first season teases a forthcoming Daredevil crossover, which may happen during the Defenders miniseries or (for all I know) some time before that.

I’m a little more excited about this than I thought I would be. There are a lot of directions they can go with that, if the heroes, or especially the villains, of these shows are pitted against each other.

Not to mention that I finally got my Stan Lee cameo. It’s in the twelfth episode. Pay attention or you’ll miss it.

Luke Cage is an expertly developed show, and a sigh of relief after the fiasco that was Jessica Jones. It will please those who enjoyed Daredevil and give some more context to this side branch of the Marvel Cinematic Universe. I look forward to season 2, and to the forthcoming Iron Fist series.

It is a Netflix exclusive as of this writing. Add it to your queue if you are a Marvel fan or looking for a show with smart conflicts between well grounded heroes and competent villains.