Wouldn’t you love to be something other than just a writer?

Of course you wouldn’t! Writing is the greatest job in the world. Once you’ve got that, you would have to be a braindead lunatic to want a different career. To someone who is a writer at heart, there is simply no redeeming factor in being anything else.

“But wait a minute,” you say. “Aren’t there people who write books and do other things. What about all those famous astronauts, movie stars, and politicians who write books?” You know who I’m talking about.

(How does he manage it?)

You see, not all writers are decent, God-fearing folk. In fact, some of them…are not even human.

When someone who is already famous decides they want to write a book, there is only one way to make it happen. And it is evil.

Because, you see, as soon as an astronaut or a politician or a movie star tries to write a book, they quickly discover that they are not up to the task, and then they ask for help from this guy:

No, no, sorry. I meant that they ask for help from this guy: 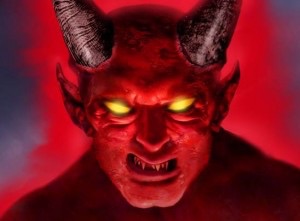 (The resemblance is uncanny, don’t you think?)

Yes, the only chance for an otherwise-famous person to write a book is to enter into a pact with Satan (but you already knew that). The point is that it can be done. But there is a price.

Once a contract with the evil one is entered into, the person’s soul is extracted from their body. And a soul without a body is just a ghost, so your disembodied spirit becomes what we in the business call a “ghost writer”. Since your soul knows everything that you know, it can write your autobiography for you, as well as any novels, recipe books, or picture books that you might want to tackle. And the rest of you goes on to live your soulless life, which can be just as rich and fulfilling as the life of a souled person (well, you can’t tackle any morally strenuous activity, like sitting on a jury, but other than that, you’re fine).

But the fact remains that someone has to be the writer, and it comes at the expense of being something else.

So why have a day job?

The answer is money.

That’s it. You were expecting a more elaborate answer? I don’t believe in complicated answers. When you ask me, “What’s the meaning of life?” I say, “Yes.”

Yet, it is also a fact that writers have to come from somewhere. A writer has something called a “background”. And, supposedly, this colors their writing and lends it an air of—whatchacallit—“authenticity”.

So having a day job can enhance your ability to write, maybe. Maybe? Eh, maybe. I know for a fact that most science fiction writers are not astronauts. Most fantasy writers have never used a sword or cast magic spells. The idea that people should write about their day jobs doesn’t make sense to me.

Yet there are some, like John Grisham, who capitalize upon their real-life experience in order to write books that other real-life experts will endorse as being “realistic”.

But the real reason to have a day job is still money.

I can prove this. Just look at what happens when a writer starts making enough money that they can quit their day job. Once the prospect of writing full time becomes viable, people tend to stop lingering in other fields. Even John Grisham stopped being a trial lawyer when his books started selling like Starbucks Franchises.

Anyway, I’m only blogging about day jobs because I recently acquired a new one. And I can admit this: having a separate job often hinders my writing productivity; but, on some days, it actually enhances my productivity. There’s something about a long day at work that makes me want to rush home and churn out a chapter. It’s paradoxical, but still satisfying.

But don’t expect any of my storylines to involve the kind of work I do. Besides, you don’t want to read a story about a software engineer who goes to work for the military and discovers a piece of top-secret software that writes sarcastic blog posts for him.