Every child dreams of growing up to join an organization with superlegal authority whose members are allowed to kill whomever they want without possibility of prosecution.

At least, that’s what I hear.

This is Hunter x Hunter. 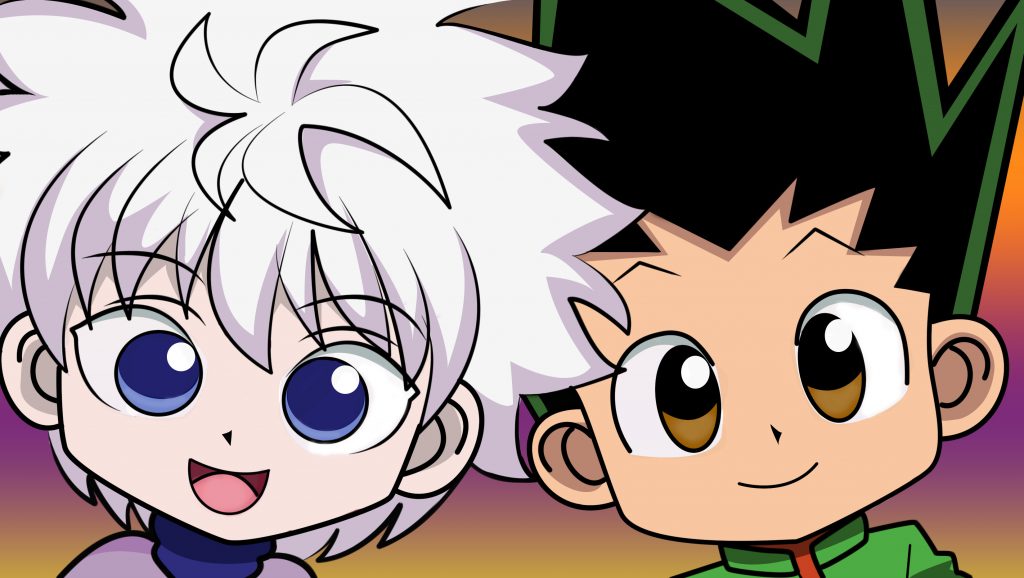 Before we begin, it should be noted that this show was adapted from a manga, and that manga has actually been turned into an anime not once, but twice. The original Hunter x Hunter TV series was first aired in 1999, and the second one began in 2011. This review only covers the latter series.

Furthermore, I watched the series in Japanese with English subtitles. As such, I cannot comment on the quality of the English voice cast.

In any case, the fact that there are so many different adaptations of the story is revealing of just how popular Hunter x Hunter is. And, apparently, it’s hot stuff in Japan, though you may not have heard much about it in the west, even if you are an anime buff.

So is this series worth all the hype it gets in Japan? Or does it deserve the neglect it gets in America?

Hunter x Hunter takes place in a world similar to our own, except that it holds a number of exotic secrets. Magical beasts, ancient cursed treasures, rare herbs and ingredients that have all sorts of supernatural effects, dangerous criminals with superhuman strength and powers—all of which need to be tracked down and collected.

To this end, there is a group of entirely unaccountable agents who get paid to obtain these items. These are the hunters, and their work is extremely dangerous.

If I were to make a comparison to any other piece of entertainment, I would say that the hunters of Hunter x Hunter are kind of like Indiana Jones. 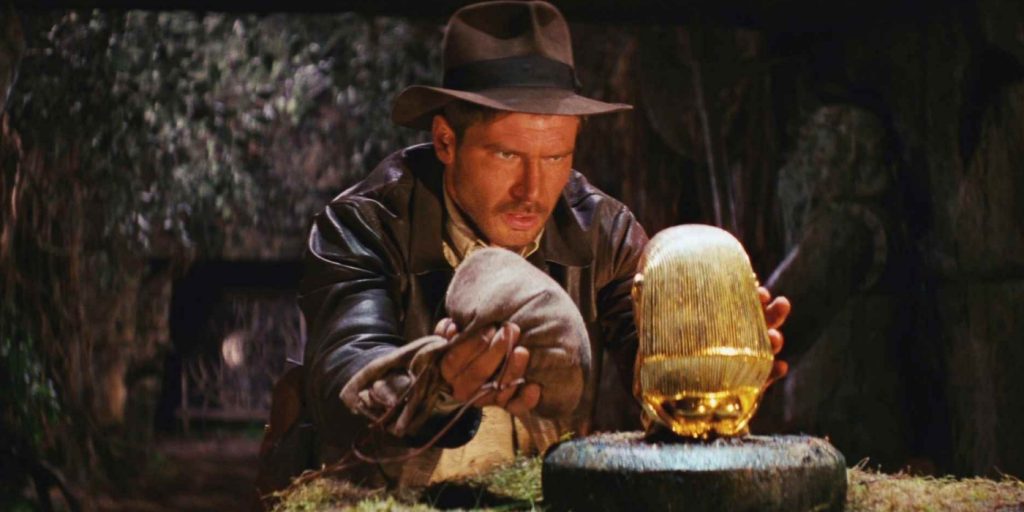 If you’ve watched any of the Indiana Jones movies, then you know that he really isn’t an archaeologist, in the purest sense of the word. No, Indy is more of a treasure hunter, who gets a payday for bringing in the valuables. He encounters a lot of magical stuff, but not in the way that, say, Harry Potter does.

And that’s the general mood that you get from this show. Magic exists, but is rare, and the world needs people of exceptional talent to hunt it down so that it can benefit the rest of society. 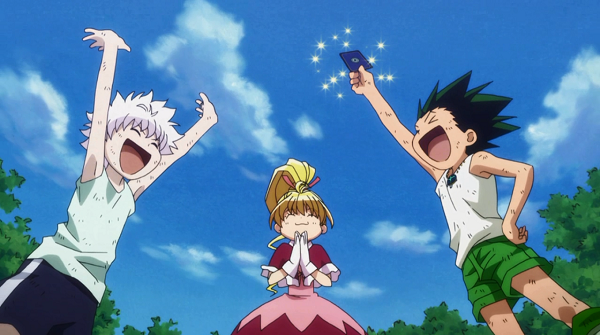 Gon is a young boy who was abandoned by his father as a baby. Apparently, his dad was so enamored with the idea of being a hunter that he couldn’t be bothered to look after his own flesh and blood.

But instead of being angry at his father, Gon decides to follow in his footsteps and become a hunter himself. He likewise abandons the woman who raised him so he can pursue this dream and maybe one day meet his old man.

He makes friends with a few other prospective hunters and they all go together to take the entrance exam for the hunter society. The exam is highly dangerous, and is specifically designed to kill a percentage of the failing applicants. But through sheer grit and determination Gon and friends pass the test and become hunters.

After that, they have all sorts of adventures all over the world. 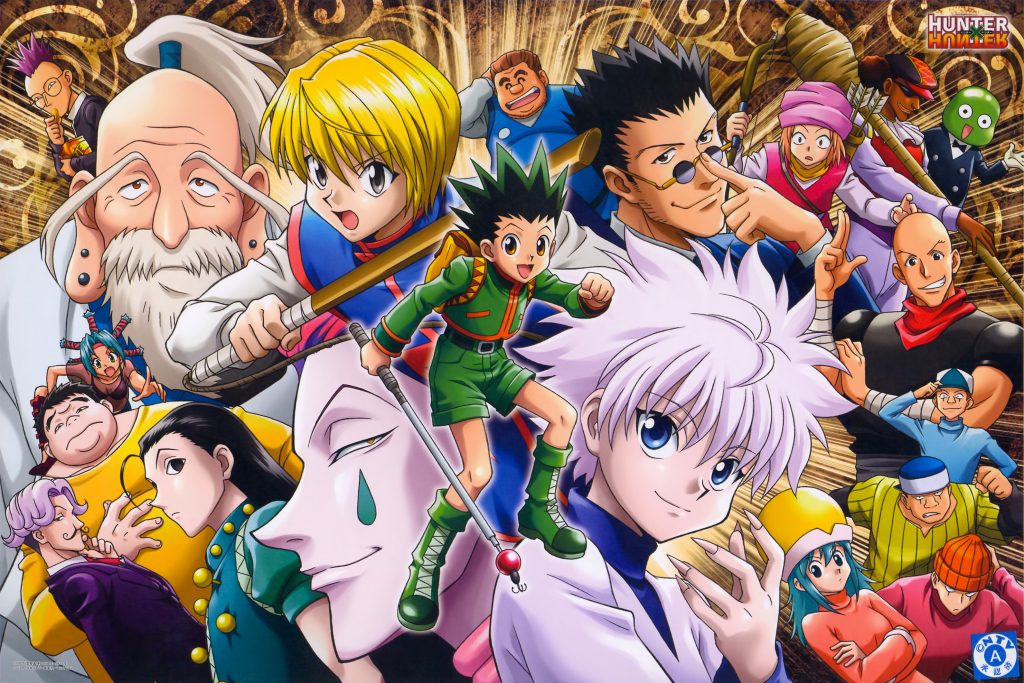 If you read everything I wrote above, you might have fallen under the impression that I actually liked this show.

You would be wrong.

They are all terrible people, and I would not want to associate with any of them in real life.

The hunter organization, as I stated above, admits anyone who is strong enough, regardless of whether they have any moral compass, yet holding a hunter’s license allows the bearer to break pretty much all laws without any kind of consequences. Some characters, like Hisoka (a magician who, the show hints, may be a child molester), specifically join the organization so that they can have unlimited license to kill.

And the so-called “heroes” of the show are little better. Gon himself may have an aversion toward killing people, but he barely bats an eye when the hunters’ association kills so many of the failing applicants. If another character is in trouble, but that character is not part of the main roster, then he can’t be bothered to save them.

Contrast that with other anime, like, for example, Naruto. Yes, that show is about a group of ninja assassins, and yes, they kill people, but they always draw a line between the people who are so dangerous that they need to be killed, versus people who are innocent and need to be protected. Never once in Hunter x Hunter do we see the main characters show concern for the lives of innocents. All they seem to care about is getting stronger, and the show espouses a stringent “Might is Right” philosophy.

It’s just not the kind of attitude I could expect of heroic people in the real world. My suspension of disbelief is strong, but it is not that strong. I can enjoy a show where magic is real and people have powers, but when you try to convince me that the good guys kill indiscriminately, that feels fake and forced…and more than a little disgusting.

In this sense, Hunter x Hunter is like the reactionary opposition to Fairy Tail. The latter show may be the best example of likeable characters in the anime world, whereas the former is one of the worst.

I get the feeling that I would have liked Hunter x Hunter a lot better when I was a little boy, as it tends to glorify and glamorize little boys as adventurous and always in the right. It has a kind of Peter Pan feel to it.

Come to think of it, the original Peter Pan stories, written by J.M. Barrie, suffered from the same kind of callousness that cankers this show, with a “hero” who commits mischief and murder. Except that the Pan stories do it with a tongue-in-cheek wink and nod that lets the audience know the story is just a story. Hunter x Hunter, on the other hand, adds a dose of realism that ultimately does disservice to the story, with elements of the true crime genre in some episodes and depictions of blood and gore.

As an anime fan, you can probably do better.

However, if you are curious enough to take a dip in these waters, you will be glad to know that the first five seasons of the show are on Netflix. Knock yourself out, if that’s the kind of stuff you’re into.