It is a hallmark in sitcom history.

It is one of the only shows brave enough to hold up a mirror and a vomit bucket to the absurdity of modern life.

It is the gateway drug to all other British comedies.

This is Keeping Up Appearances. 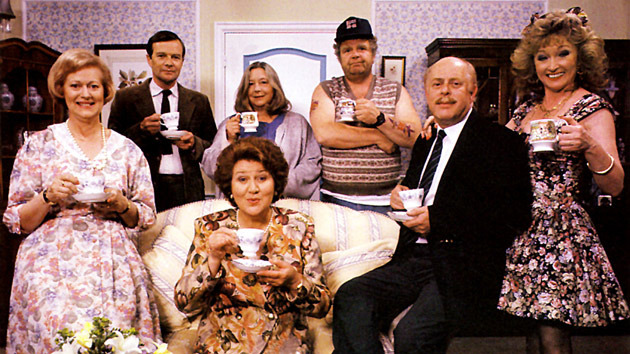 Keeping Up Appearances was an early 90s sitcom that ran in the United Kingdom and has since found immortality in syndication not only in its home country, but all over the world.

It is the most syndicated British TV program in history, outpacing Top Gear, Sherlock, and all of the natural history shows narrated by David Attenborough.

The brainchild of David Clark, who also wrote other popular British comedies Last of the Summer Wine and Open All Hours, and produced by Harold Snoad, the show has become a perennial favorite. In the United States, it is usually found on public television stations, often as part of block programming with a number of other British comedies.

The popularity of the series has grown to the point where it has the appeal of nostalgia, and fan sites, parody Twitter accounts, lists of quotes, and memes are bountiful.

But what is it that makes this show so beloved?

While Keeping Up Appearances features and ensemble cast, and each character is popular enough to have their own fandom, it would be dishonest to say that there is no one lynch pin. There is.

The reason so many people love and hate this show, and the reason that it is never to be forgotten, all falls on the shoulders of a single character—this one: 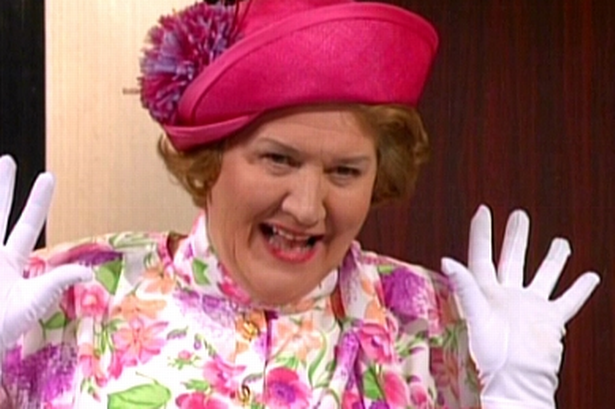 Hycinth Bucket is the centerpiece of the show. Played with Oscar-caliber method acting by the unsinkable Patricia Routledge, Hyacinth is a middle aged, empty nested, narcissistic and completely delusional social climber who couldn’t give half a dram about how much she inconveniences other people. She only cares about impressing her betters into thinking that she is a prominent lady of high social standing.

She is easily startstruck by anyone with wealth, social influence, or aristocratic genealogy and looks down her nose at anyone lacking those qualities. She craves acknowledgement to the point where she literally desires nothing else. Her own safety and the safety of others is not even an afterthought, and even the basic human needs of food, sleep, and shelter will not deter her.

This obsession, bordering on insanity, makes her unpleasant to the point where friends, neighbors, and even strangers go out of their way to avoid her. Yet she is blissfully unaware of what other people really think of her, believing instead that she is beloved by the entire community as a pillar and support to all.

Her childhood is never explicitly played out on screen, but she comes from a blue collar, working class family who live on the wrong side of the tracks and is a source of endless shame for her. It appears that she only escaped that life by marrying well. But far from showing gratitude to her husband for the many comforts she now enjoys, she instead makes neverending impositions on him, and even belittles him for whatever imagined transgressions he makes against her quest for social superiority. 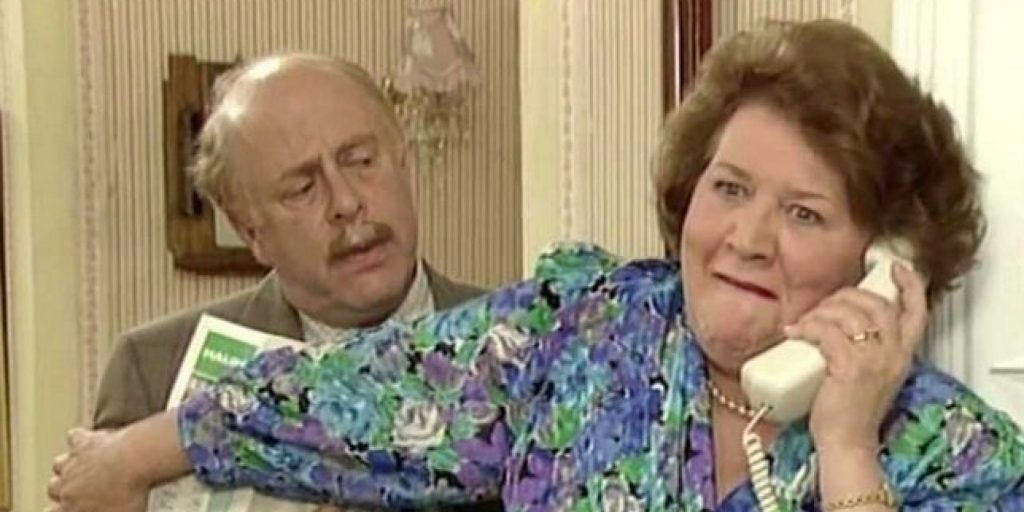 The series has a very loose continuity, with only the occasional reference to previous episodes. Each story is mostly self-contained, and the show can be watched in almost any order.

A typical episode will play out as follows:

The formula gets broken by many episodes that stray outside the lines, yet they all basically orbit this same set of stars. And it never gets tired, because the viewer is given an exquisite pleasure whenever Hyacinth gets hurt, no matter how many times she gets hurt. The show appeals to your schadenfreude in a way no other piece of entertainment ever has.

Another way the series keeps itself from becoming stale is by providing the viewer with a number of entertaining supporting characters. And while each of these is overshadowed by Hyacinth, they all have their own moments in the sun. 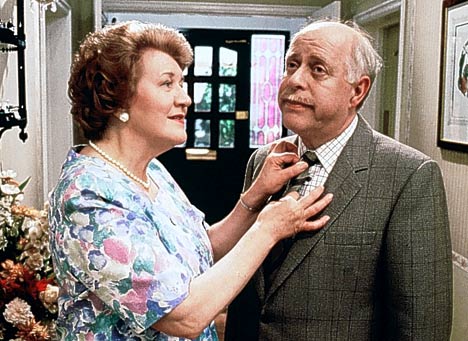 Hyacinth’s longsuffering husband who bears the brunt of her wrath. Richard is not allowed to make any decisions of his own. Hyacinth chooses what he wears, what he eats, and even what illnesses he has at any given moment.

Richard is resigned to his fate. He meekly does whatever Hyacinth wants, and only wishes that she would just tell him what to do. But since Hyacinth does not like the idea of being married to a spineless coward, she gives him the illusion of choice, always insisting that she defers to his judgment, then vetoes whatever choices he makes until he lands at the position she had intended all along. Thus, she forces him to constantly guess what she is thinking. 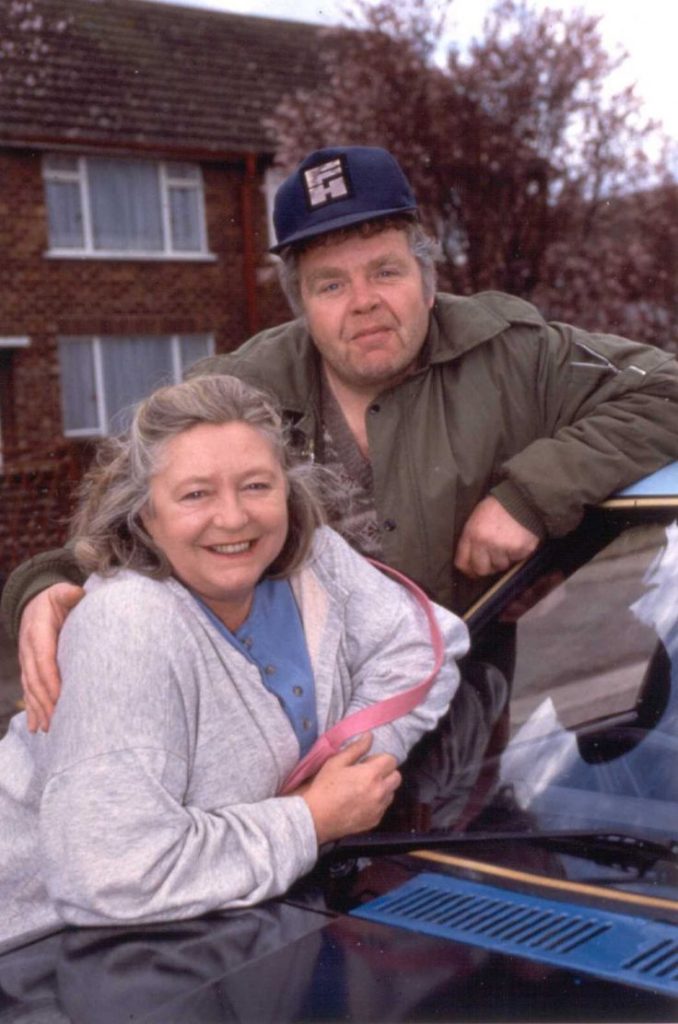 The spark has gone from their marriage, and their humor centers around Daisy’s advances to lure and seduce her husband, and his stony, oafish rebuffs of every attempt. 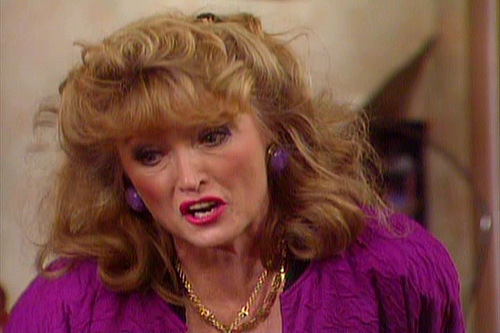 A perpetual bachelorette who likes her men young, handsome, and, most importantly, married. She has a new one every week, and whenever she’s not courting a new beau she is fighting with his wife, sometimes on the phone and sometimes in person.

She has a crush on the vicar of Hyacinth’s church, and puts him in embarrassing situations whenever she can manage. 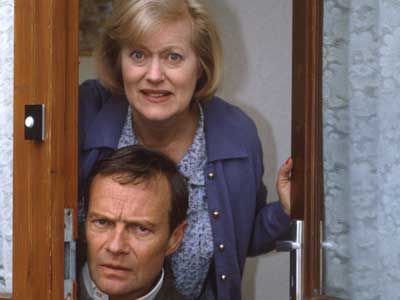 Hyacinth’s neighbors. A brother and sister who have been living under the same roof ever since he got divorced.

Apart from Richard, Elizabeth is Hyacinth’s biggest victim. She is constantly being invited over for coffee, so that Hyacinth can pass judgment upon her.

Emmet is terrified of Hyacinth, and hides from her whenever possible. When she sees him, she sings at him, hoping to score a part in the amateur opera company he runs.

They’re both too politely British to make any move against her, choosing instead to live in perpetual fear under her shadow.

It seems as if every sitcom has one character who is only known by reputation. Frasier had Maris. Veep had the president. Home Improvement had Wilson (partially).

Keeping Up Appearances has several, and although a few of them eventually transition into full appearances, they still revel in obscurity.

These include Violet, Hyacinth’s only wealthy relative, and her not-right-in-the-head husband Bruce, who prefers to go about his everyday life cosplaying as a cowboy or Maid Marian.

There’s also “Daddy”, the father of Hyacinth, Daisy, Rose, and Violet, who shares a house with two of his daughters and is constantly running away to get remarried.

And then there’s Sheridan, Hyacinth’s son and the only character who never makes an appearance during the entire series. He makes a number of phone calls to his parents, with only Hyacinth’s half of the conversation heard, and invariably asks for money. Hyacinth constantly brags to friends and strangers about what a genius he is and how well he is doing “at university”, though in reality he is dropping out of all the important classes so he can study needlework and poetry with the boyfriend with whom he is living.

The Secret of Its Success

It merits asking how such a show, with its simple premise and modest budget, could have become the worldwide sensation that it has.

And, of course, the answer is Hyacinth herself. This show succeeds because of its unbelievable realism. The character of Hyacinth may seem like an exaggeration or a caricature—someone who could never exist in the real world. But she is real. I know her. You know her. If you do not have a Hyacinth in your immediate family, then one is living on your street, or goes to your church, or occasionally harasses you when you’re out for a walk, minding your own business.

Everyone who watches this show ends up pointing at the screen and shouting “THAT’S JUST LIKE [Insert name here]”. That’s why it will never die. It is too universal in its appeal.

Keeping Up Appearances is one of the most worthy shows to ever grace Netflix. It is a cultural phenomenon and a master’s class in comedy writing. It uncannily incorporates humor from both sides of the gender divide and is scathingly realistic in its examination of human absurdity. It deserves a thousand Emmys, which it never earned only because it was not made in America.

All the episodes are on Netflix, including the final clip show that was broadcast only in America. Make it a priority for your queue.

And I do mean “Make it a priority,” because Netflix has informed me that the show will disappear from its menu come March 1st. You only have one week to watch the whole series. You’d better start right now.

You don’t want to miss it.