After many years of study, with thousands of samples examined and hundreds of rounds of A-B testing, I learned a disturbing truth:

Some people do not like cartoons, regardless of the quality or subject matter.

Again and again, I have asked myself what could be the source of this prejudice? How could anyone hold such a blanket opinion against an entire art form? It doesn’t generally happen elsewhere. You don’t hear people saying that they don’t like any paintings or don’t like any sculpture or don’t like any movies whatsoever.

Whence, then, the disapproval of all things animated?

Some responses include the accusation that cartoons are not realistic, but that’s a milquetoast response if ever there was one. After all, what kind of art can ever honestly be called “realistic”. Landscapes are not really made of paint. Marble blocks are not really people made of stone. Even photographs—arguably the most true-to-life art form—are built on the illusion that a moment in time has been frozen in motionless immortality. None of these can be said to be more “real” than animation.

The other complaint people offer is that animation is meant for children, that it lacks refinement and is unable to hold the attention of a mature intellect.

That argument has been disproven many times, though there may be no finer counterexample than Phineas and Ferb. 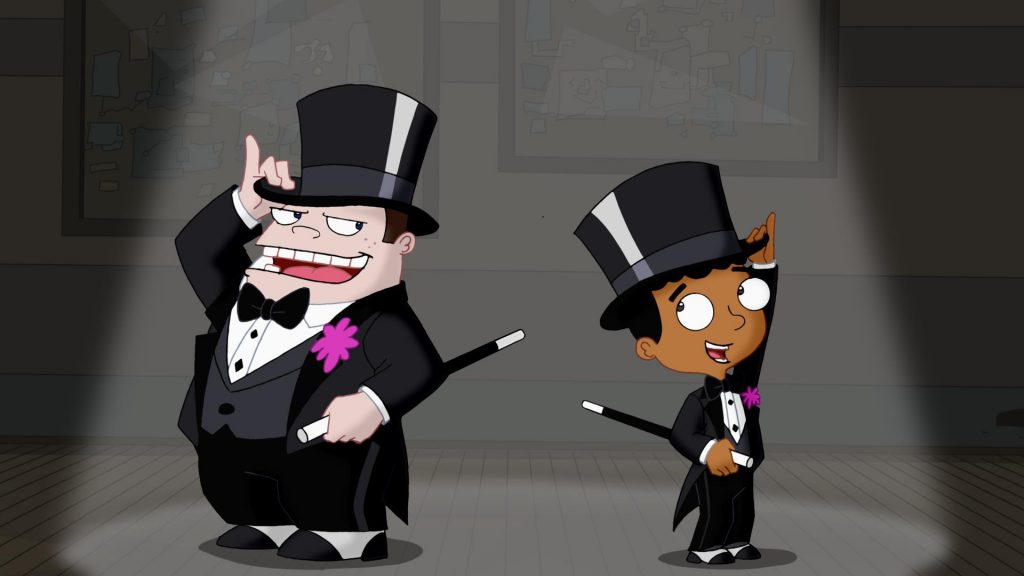 Or Buford and Baljeet, if occasion calls for them.

This is No Ordinary Kids’ Show

The Disney Channel certainly is home to some unwatchable content. During its run, Phineas and Ferb had to share the space with a lot of shows that would have been more at home in a Waste Management truck.

Too many of those shows were an insult to even the smallest of intellects. But none of them were animated.

Because cartoons are SO immature.

While these sitcoms were financial successes for the company (due to negligent parents parking their non-verbal babies in front of the TV with no oversight whatsoever), they each faded into obscurity like fog under a noonday sun. And they have come dangerously close to taking the whole channel down with them (and may still do so).

The only saving grace has been a recent run of quality animated shows, starting with Phineas and Ferb, which drew a tremendous audience of children and adults and spurred a renaissance of animated programming on cable TV, even reaching the shores of other channels.

What made this show so spectacular? It started with the people behind it. 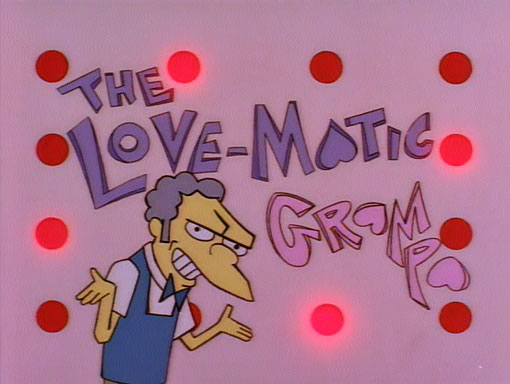 Phineas and Ferb was created by Dan Povenmire and Jeff “Swampy” Marsh, two animators who first met in the 1990s when they worked on many golden-age episodes of The Simpsons. They did their work under Matt Groening’s tutelage and took a lot of what was good about that show with them when they left. Their first writing gig was on Rocko’s Modern Life, and they eventually evolved together as creators, sometimes working together, other times apart.

Despite this long period of growth, a great deal of that original, golden-age Simpsons charm and whimsy wound up in their first original animated show. Phineas and Ferb has been called a “family-friendly Simpsons” by more than one observer. And there are undeniable parallels between a certain number of characters. 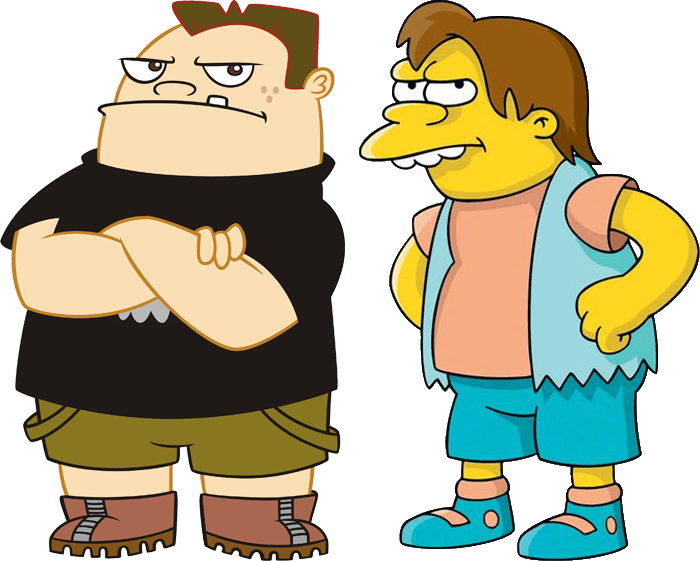 The result was a smash hit that generated a mountain of moolah for the mouse-eared cable channel. Throughout its run, it had crossovers with other, newly acquired Disney properties, such as Marvel and Star Wars. It was, for a long time, the highest-rated show for the channel and its success has yet to be fully replicated.

Despite being marketed towards children, the show was drenched in intellectual humor and touched on a variety of adult topics, such as mixed families and divorce, though it deftly avoided blowing these subjects out of proportion through “very special episodes”. The main characters were stepbrothers, but they don’t make a fuss about it. Everyone just accepts that. The primary villain shares custody of his teenage daughter with an estranged wife, but the show makes no attempt at moralizing.

The Story and Characters 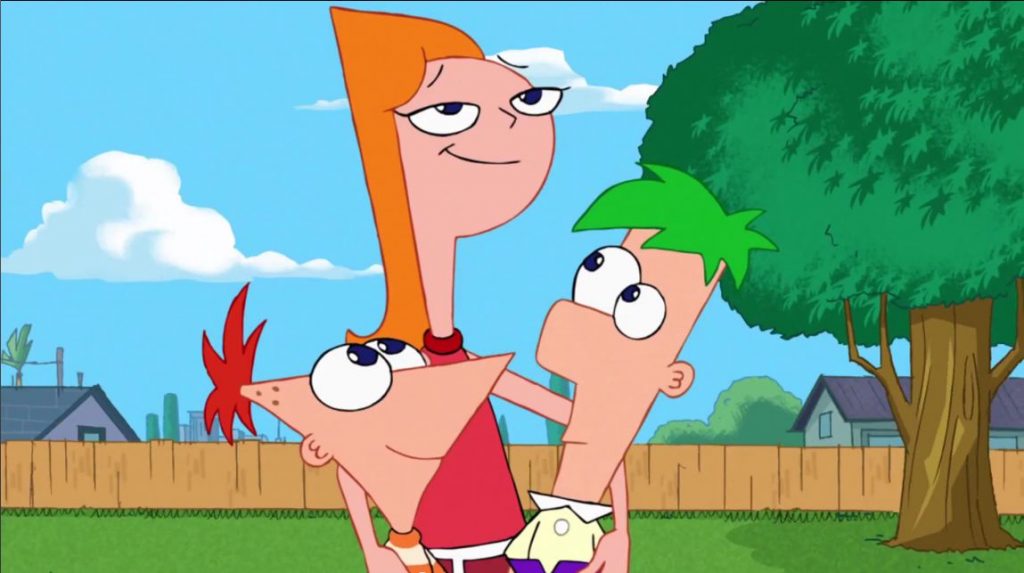 Phineas and Ferb is a study in how many variations can be made with a single theme. Each episode follows a tried and true formula, except for when it is breaking that formula as a way of subverting the audience’s expectations.

The central conceit is the plans of Phineas and his brother Ferb to make the most of every day of their summer vacation. Being brilliant engineers and fearless explorers, their idea of a day well spent includes fantastic ventures that most humans will never undertake even once in a lifetime: discovering Atlantis, building a zero-gravity field, opening a portal to Mars, becoming one-hit wonders, opening a mobile truck stop—everything is within the realm of possibility for these two.

Their sister, Candace, on the other hand, has the normal human reaction of “they can’t be allowed to do that!” and tries at every opportunity to expose their shenanigans to their mother.

Meanwhile, the family’s pet platypus (because that’s a thing) constantly sneaks away to do battle with his archnemesis: an evil scientist who carries out dastardly plans as a way of compensating for how pathetic his life is.

This image is the perfect metaphor for their relationship.

Dr. Doofenshmirtz may be the most inept evil scientist in the history of the world, but Perry the Platypus is the most seasoned secret agent on the planet. Their eternal struggle is carried out in secret, with Perry’s host family none the wiser.

Due to a confluence of factors, usually instigated by Perry or the doctor, all evidence of the boys’ daily activities gets erased by the time Candace gets her mother to look outside, thus sparing Phineas and Ferb from any comeuppance for their zany actions.

It’s a shockingly original formula. And as I intimated above, each episode works to either establish that formula or to tear it down, and it’s difficult to tell which is more entertaining.

One of the most revolutionary aspects of the show was the decision, made early on in the series’s production, that every episode would contain a musical number. 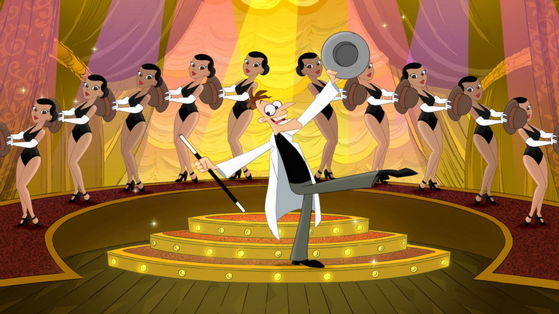 With more than 100 episodes, this equated to a plethora of original songs produced by the show, which cover almost every kind of musical genre and style, and are performed by different characters in each iteration, as a way of giving the show endless variety and flair. While it was admittedly difficult for the showrunners to keep producing such a long line of songs, and not all of them are winners, quite a few of these musical numbers are worthy of the best part of the Disney brand, and were touching enough to deliver laughter and genuine tears alike.

Phineas and Ferb is a monolith in the sea of animated entertainment. It brought back a sophistication to televised animated programming that hadn’t been seen since Animaniacs went off the air. It is one show that parents won’t be ashamed to watch with their children, and it opened the door for countless other quality animated shows that we have gotten in the years since it first aired.

Every episode of the series is now on Netflix (though Netflix uses a different numbering system for the show than iTunes and other platforms—go figure), and it is one of the best things on the platform, and certainly the best thing there that is tooled for children.

Add it to your queue and enjoy.