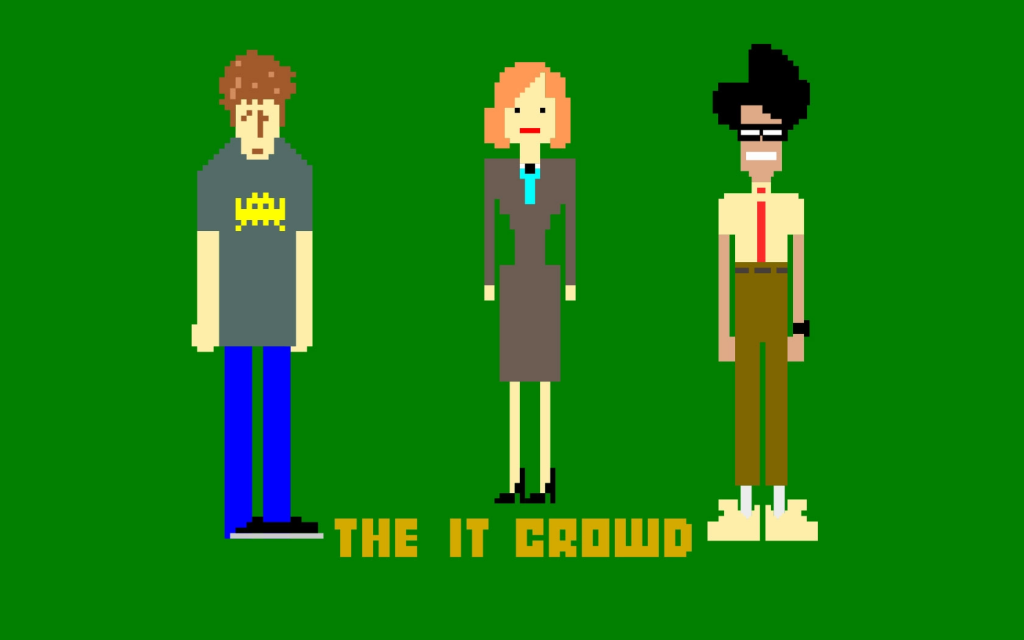 As an obscure British comedy, The IT Crowd has not registered on a lot of radars. It has a cult following, and for good reason, but it never quite made history.

Which gives us the perfect opportunity to get acquainted with it. Shows like this are a treasure, especially for viewers who feel like they’ve already seen EVERYTHING, for while it’s true that the less popular, less viewed shows are usually also less good, occasionally you encounter something brilliant that others have overlooked. You find something so fresh that people have not yet learned to appreciate it. Not only is such an experience delightful, but it gives you the chance to introduce the show to a wider audience. 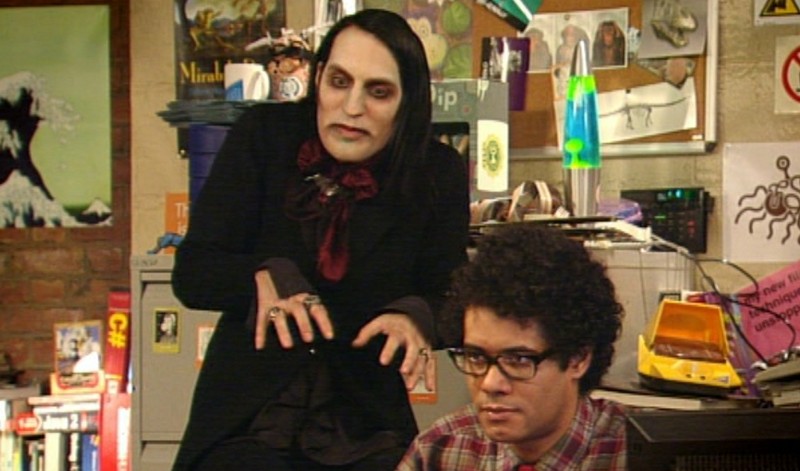 I’m putting this before the bulk of my review so that you will know what you are getting into. You have been warned. This show, despite all of its best qualities, is not for children of any age. I am not yanking your chain. This is not a drill. 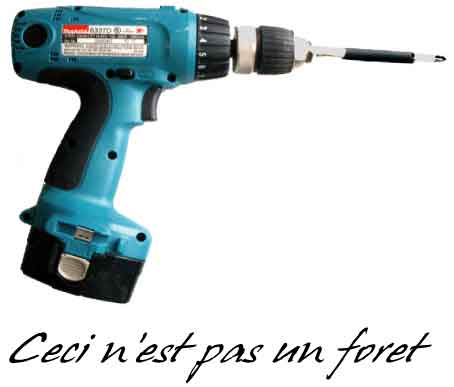 With that out of the way, let’s talk about The IT Crowd.

The IT Crowd is a sitcom about the IT department of a fictional multi-billion dollar company called Reynholm Industries that is headquartered in London. What the company does is never explained, except for a casual comment in the first episode that it’s a place where not a lot of work gets done but everyone is having an affair. 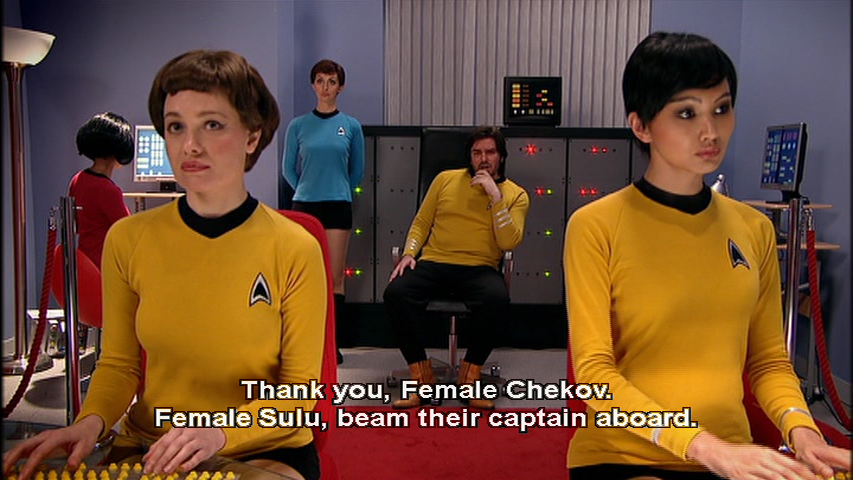 And sometimes, they get weird.

But the IT department is much like the IT department at any other company: run by no more than two nerds dwelling in the basement. They do almost no work and receive almost no respect from their coworkers, and they couldn’t be happier about that…except when someone has an actual problem with their computer.

“Hello, this is IT. Have you tried turning it off an on again?” is how they always answer the phone. And, somehow, they manage to keep the company running.

But when a new department manager shows up, who knows absolutely nothing about computers but is determined to impress the higher ups, things are going to get seriously crazy. 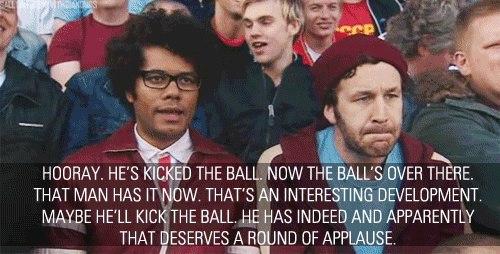 Oddly enough, this show is almost nothing like The Big Bang Theory.

The main characters are nerds, sure enough, but that’s where the similarity ends. Where The Big Bang Theory is an exploration of nerd culture, and puts its nerds in nerdy situations and ponders the existential question of what it is to be a nerd, The IT Crowd instead focuses purely on comedy.

Which is not a bad thing. Still, it can be said that the characters could have been transplanted into almost any other situation, and it would have worked the same. For while The IT Crowd is a show with nerds, it is not a show about nerds. Instead, it is a show about a group of truly awful human beings who make each other’s lives, and the lives of the people around them, an endless torment of awkwardness.

That’s right: The IT Crowd is actually the spiritual successor to Seinfeld.

That may seem like a stretch, but consider the main characters:

Roy is a barely competent worker who is more concerned about hooking up with women than in contributing to society, and he will weave any imaginable deception to achieve this end.

Moss is an oddball who may be brilliant or insane, but it is impossible to tell for sure.

Jen is duplicitous hypocrite who likes to believe she is more qualified than her coworkers, but is extremely judgmental and, when push comes to shove, not very good at her job.

Or maybe we should call them George, Kramer, and Elaine.

But The IT Crowd succeeds in a way that Seinfeld did not. Firstly because it introduces slapstick humor elements that Seinfeld could not have gotten away with, and secondly in that the show appeals to a broader audience. Because Seinfeld‘s greatest shortcoming was the fact that, like 30 Rock, it can only be fully appreciated by New Yorkers. For most readers of this blog, London is more exotic than New York, and yet The IT Crowd‘s representation of the modern office is universal, and I never felt left out of the loop simply because I don’t live in the UK.

More shocking still is how this show masters the Seinfeld formula with one character missing. Nobody in The IT Crowd is analogous to Jerry Seinfeld himself. And it’s astounding to see how well the character balance works without him. There is no shoehorning any standup act into the narrative. And, as a result, the comedy is snappier. Every laugh I gave this show was a full-throated belly laugh. And though not every episode was golden, the best seven or eight of them were some of the funniest things I have ever seen.

The show’s characters are fantastic, but its greatest strength comes from its moments—those points at which the conflicts escalate into hilarity and spiral out of control. Such humorous spectacle is a trademark of great British comedies, and they blend well with the Seinfeld-esque aspects, creating an environment where bad things happen to bad people.

When the nerds give Jen a box and tell her it contains the entire internet, it’s funny. When Jen uses that box in a big presentation in front of the entire company, and everyone instantly believes it contains the internet, it’s funny. When the box is accidentally broken, and everyone flies into a panic, believing that it’s the end of the world, it’s classic.

So much of what’s great about this show can’t honestly be described without ruining the experience. Rest assured that much of the comedy comes from the way this show surprises you. And it surprises you constantly. 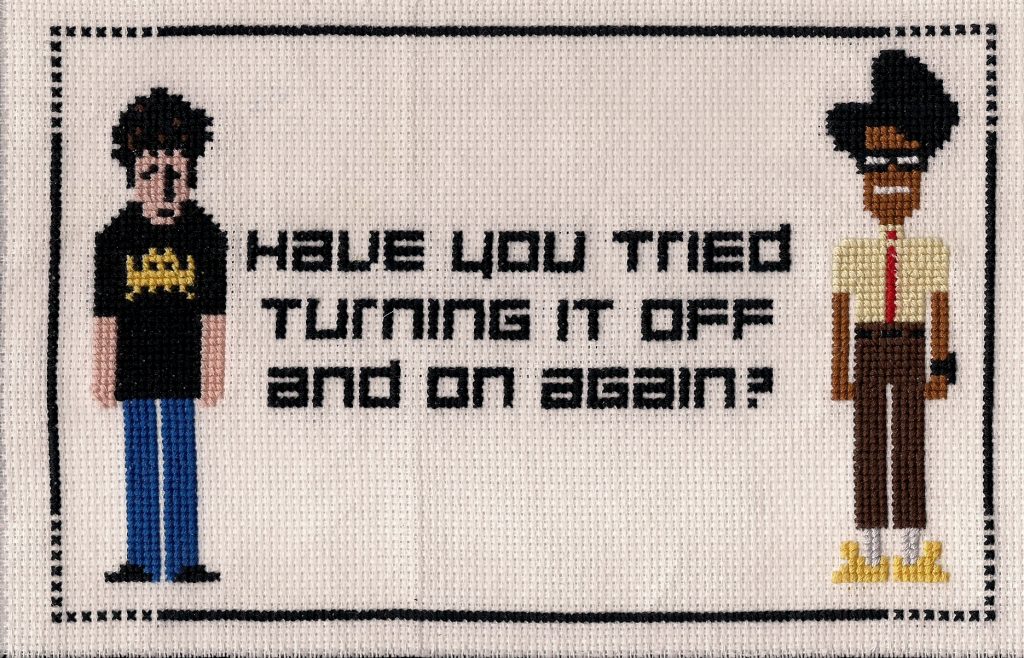 The IT Crowd is phenomenal. The fact that it builds a better Seinfeld is reason enough to endorse it, but it doesn’t stop there. It crosses the line separating works that should merely be appreciated from works that should be intensely studied. People who struggle with writing good humor would do well to perform their own analysis of the show’s nuance and patterns.

At only 25 episodes long, the series is highly bingeable and will not be a drain on your time. Every moment of the show is on Netflix right now, so if you’re looking for your next obsession, you have an answer.

Don’t let this one get away.