A lot of good movies get overlooked. Some are just ahead of their time. Others aren’t marketed well. And a few just have a run of bad luck at the time of their release. Despite their qualities, or even their genius, these movies find themselves undeservedly thrust onto the scrap heap of history.

Toys is not one of those movies. 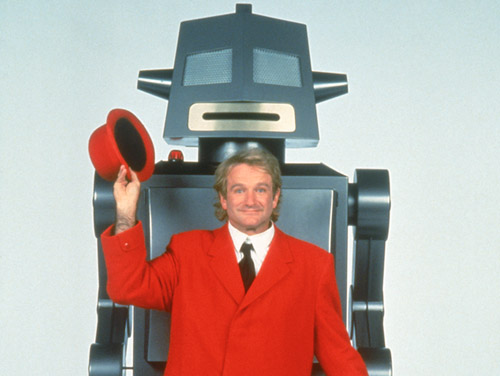 The 1992 comic adventure film, starring Robin Williams, earns its status as an overlooked movie, and is one of the reasons that the scrap heap exists.

Nevertheless, even the world’s less loved films can benefit from examination (or in this case, autopsy) to determine exactly why they didn’t work. And, considering the quality of Mr. Williams’s other films, we are here left with the question of why he was not able to save this movie. It boggles the mind and must be addressed.

Let’s take a look at the various aspects of the film and see if we can find out where it went wrong. 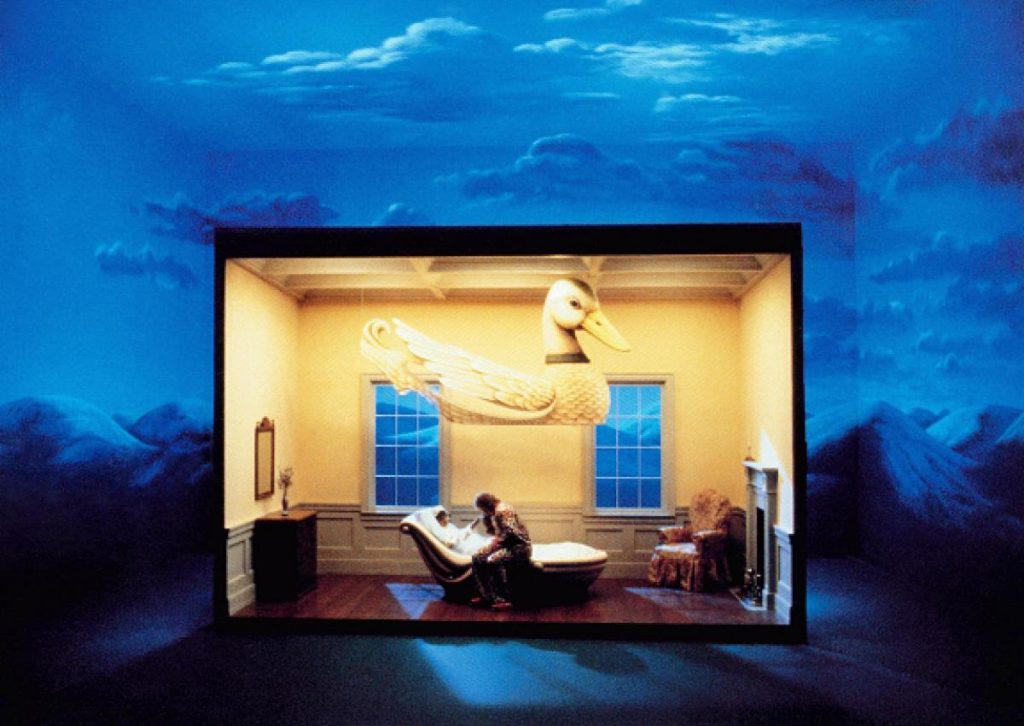 Toys is perhaps the world’s most important example of attempted iconography. The film puts a great deal of its energy into its aesthetic and winds up with some truly beautiful setpieces. The filmmakers drew much of their inspiration from Rene Magritte, attempting to replicate the dimensions and impact of his art, but without the more intimidating aspects of his bizarre works. The film takes a very safe approach in its aesthetic, which does not work if you are trying to channel the ghost of Magritte.

Furthermore, this peculiar aesthetic does not saturate the film. It is present in some scenes but not in most, creating a disjointed, incongruous work that has a hard time keeping the viewer invested in the story.

Take, for example, on of the opening setpieces of the movie: a giant cube that unfolds like a popup book to become a house.

Rather whimsical, isn’t it? An entire movie that worked like this scene would be at least interesting, if not appealing.

But that gets paired with a lot of later setpieces that just don’t fit under the same umbrella, such as the interior of the actual toy factory where most of the movie takes place.

I can tell that the filmmakers want me to believe that this shot is just as whimsical as the one above, but the effect is more off-putting. The factory floor is a gaudy affair, cheap in design, ugly in execution, and makes little effort to disguise the fact that it is a sound stage with a fake backdrop. That flat wall of windows in the background, combined with the laser-straight row of machines on an otherwise empty floor plan, undercuts the sense that this is supposed to be a world of chaotic playfulness.

Contrast this to a similar movie that tried to portray a whimsical fantasy factory in a way that transported the viewer to another world. 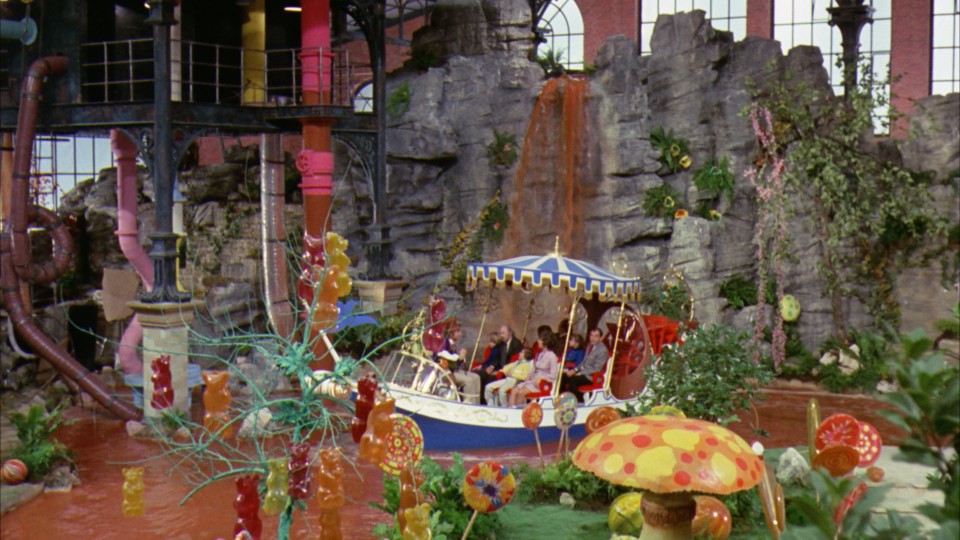 Toys tries very much to be in the same vein as Willy Wonka and the Chocolate Factory, but it doesn’t put in the same amount of effort. Just look at the above image. Notice the asymmetry, the clutter, the wildness of the entire landscape. And while it’s obvious that this scene had a much smaller sound stage than the one in Toys, the sense of space is so much bigger. The illusion, as it were, is more real.

And perhaps that is Toys greatest failing: it tries to do what Willy Wonka did, but it wasn’t made with the same level of care. Likely, it was not given the kind of budget needed to match the filmmakers’ vision, and so the aesthetic was watered down in the hopes that they could get the results they wanted without paying the requisite price.

Which is a shame, because what the filmmakers were trying to do was good. It might have even been great. And I’m sorry that they weren’t able to make the movie they were obviously trying to make, which could have been one for the ages.

In many ways, Toys is the perfect candidate for a movie remake. It has too good a foundation to be forgotten completely, but is so poorly executed that it can definitely be done better. No other movie is so badly in need of a do-over. 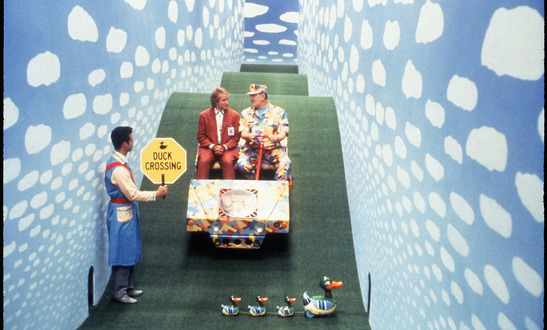 The central plot begins with the death of Kenneth Zevo, an eccentric toymaker, who, instead of willing his toy company to his son, Leslie (played by Williams), decides to give it to his brother Leland, a three-star general in the U.S. Army. He does this knowing that Leland will cause problems for the company and that this will force Leslie to stand up for himself and take control.

But Leland is not happy about owning a toy company, since it has nothing to do with his dream of earning a fourth star for his military service. Still, he takes the job, for the sake of his brother’s memory, and when he comes to the conclusion that the same technology used in remote-control toys can be used to create remote-control weapons, he goes all Ender’s Game on the company and creates a fleet of remote control helicopters carrying real guns and explosives, piloted by children who believe they are only playing a video game. (It’s funny how this movie treats the idea of remotely operated drones as a futuristic, sci-fi pipe dream. Funny, and kind of scary.)

And that would have been a great story to tell on the big screen, except that the movie makes an effort to keep that plot out of the spotlight. The ball doesn’t get rolling on that plot until the movie is half over. In the meantime, we’re treated to an awkward, forced romance between Leslie and a random company employee named Gwen Tyler—a real Robin Wright type of character, played appropriately by Robin Wright. 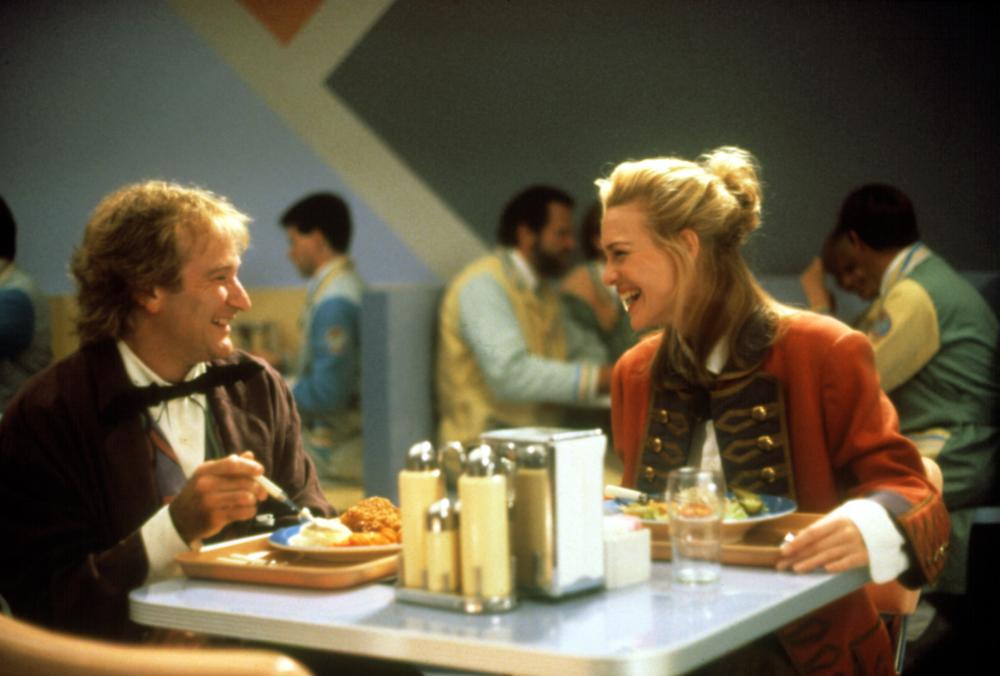 And if it wasn’t weird enough that both of these characters are played by actors named Robin, their romance can’t decide whether it’s a subplot or the main plot, becoming more of a distraction than a complement to the central conflict of the story.

This dilutes the first act of the movie to yawnworthy proportions, as too many scenes are given to elaborate on the elements of the story. There’s a lot of open space and emptiness, and when the filmmakers try to flip the script in the third act, and give us a scenario where the main characters have to sneak into what is now a weapons factory populated by killer toys, it feels entirely unearned by all that has come before it.

If you go your whole life without watching Toys, then you won’t be cursing your luck on your deathbed. The movie is entirely skippable and not at all characteristic of Robin Williams’s best work. Even if you love the late comedian and are seeking to acquaint yourself with some of his lesser-known performances, you are not missing anything by passing up on Toys.

Still, if you find yourself, for whatever reason, wanting to watch this movie, you can find it on Netflix. And who knows: you may find something there that I was not able to see. Barring that, there’s plenty of other stuff to watch on Netflix.

The Right to ComplainBlocksNetflixing: Jessica J...Netflixing: The Good ...Hint #12: The Reader's Jo...