You’re probably wondering what this scene is referencing, and why it is parodied in so many places. 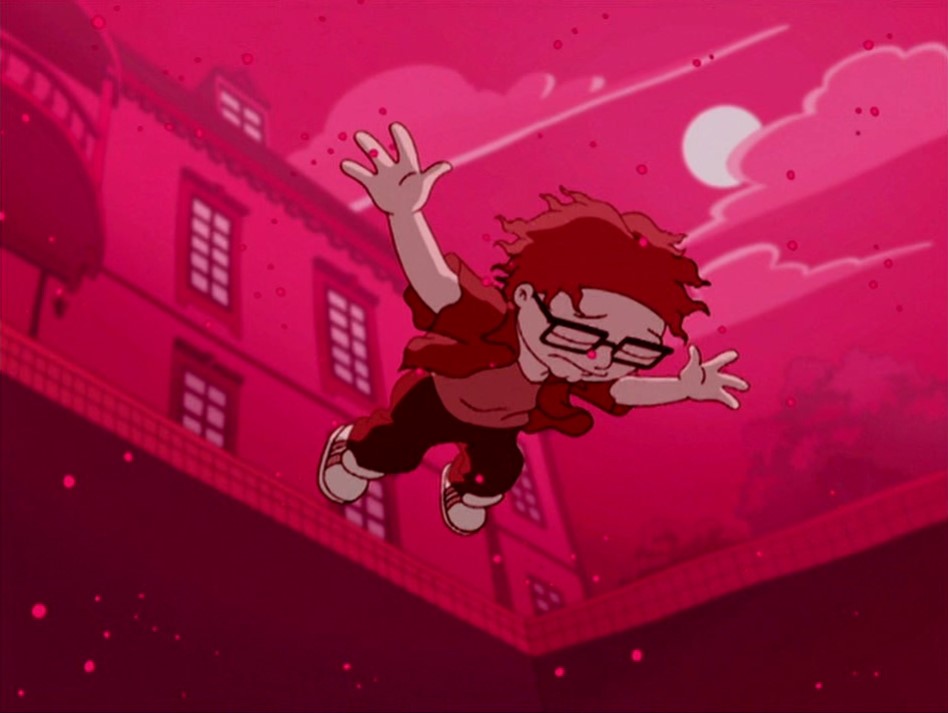 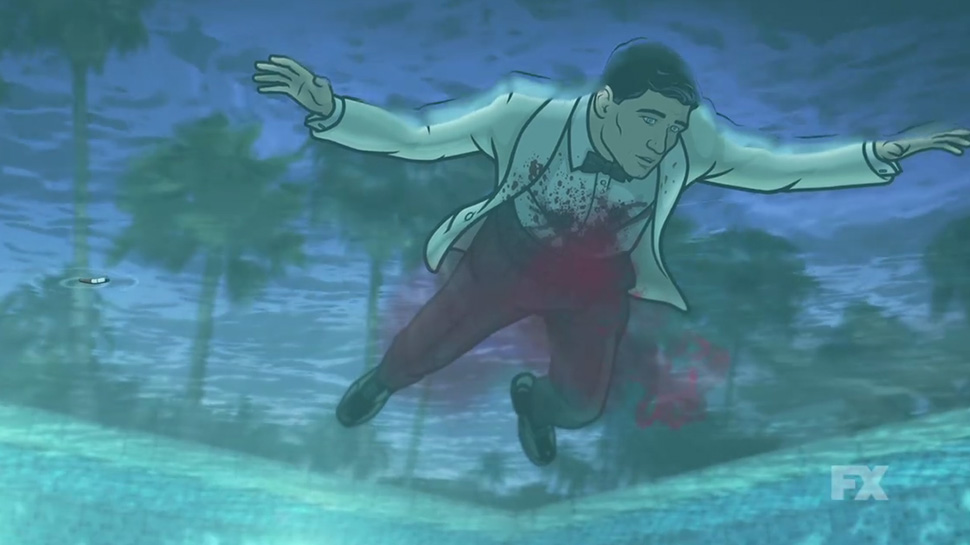 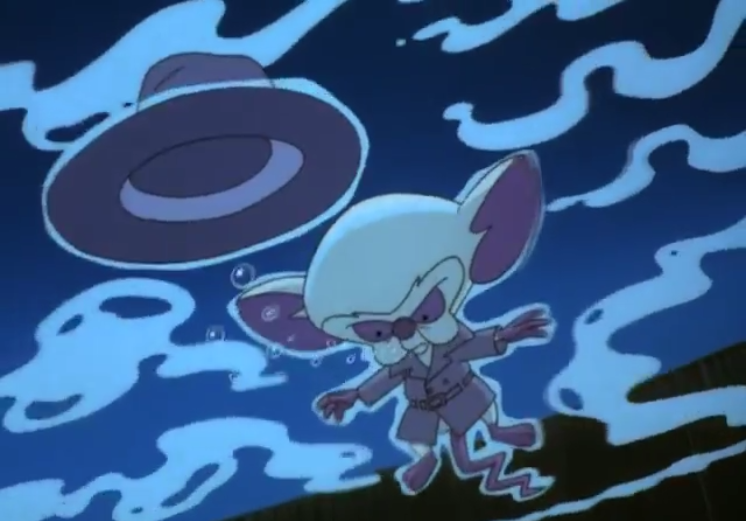 What are all these images? Oh, just a few unimportant homages to one of the most famous motion pictures of all time. Unmistakable, yet largely unrecognizable to the intended viewing audience. Their tale is a largely tragic one, of writers overestimating the viewer’s knowledge of film trivia. But this is where I come in.

I found myself in a tight spot, having watched no new TV series since my last review. Meanwhile, a strange and completely unnecessary voiceover narration had started describing my every action. It got really irritating after the shortest of whiles.

Nevertheless, I had to make an appointment with my Netflix list, not daring to let the week go by without a review. Having no time to commit to an entire series, I desperately examined the movies on offer. And with time running out, I dashed into the nearest option—an old picture, what some would romantically refer to as a “classic,” but which had been largely neglected with the passing of years.

“You’re late,” a voice said as I started up the video stream.

“I don’t time to tell you what trouble you’ve been. Just come along and get it done.”

It was as unappetizing an invitation as I had ever heard. Yet all that awaited me if I turned back was the pressure to find something else to review. I admit I was curious enough to continue.

In an ill-conceived attempt to break the ice, I said, “You were a big picture, once.”

The movie took a long drag on its cigarette. “I was nominated for 11 Oscars, including Best Picture and all the acting awards. When I was passed up for Best Actress, it was the biggest scandal in the history of the academy.”

“So you’re planning a comeback?”

It wrinkled its nose. “I hate that word. I am planning my return—my return to the public eye through the medium of Netflix, and your review is going to help me do it.” Pointing to her typewriter, she snapped, “Get on it.”

“But I can’t write a blog post on a typewriter.”

“I’m not paying you to complain. Now, you’re going to write that review to my exact specifications.”

So, with no other options, I played along with the movie’s scheme.

This is Sunset Boulevard.

The Legacy of the Movie 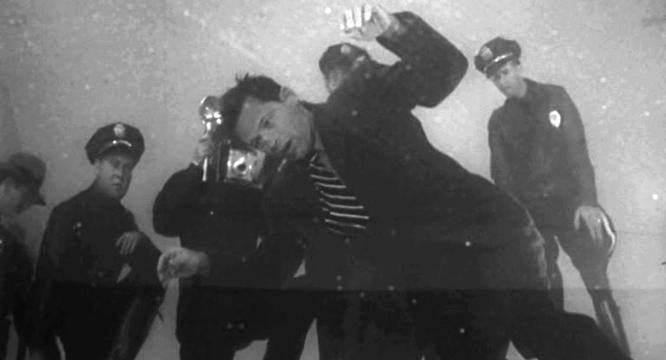 Released in 1950 and co-written by Billy Wilder, Sunset Boulevard is, according to many in the film industry, on the short list of the best movies ever made. But even if that’s wrong, it is undeniably one of the most influential movies in history. Not only has it been parodied endlessly, but the story has proven to be prophetic in every era of filmmaking that has followed, as the movie becomes a testament to the danger and destruction that comes with superstardom.

As a classic film, it often gets ignored by your average Netflix customer, though your typical film student will be all too familiar with it. It is a bit of an oddity, as a noir story where none of the characters are detectives (how does that even happen?), but it was recognizable enough to be made into a stage musical written by Andrew Lloyd Webber.

Watching it myself, I admit a bit of skepticism. The pacing is painfully slow at times, and it’s sometimes difficult to understand the main character’s motivations, kind of like that moment in a horror movie when you want to scream at the protagonist for going down into the basement when everybody knows that YOU DON’T GO DOWN INTO THE BASEMENT WHEN YOU’RE IN A HORROR MOVIE. Sheesh.

But then, I would be lying if I said there isn’t something unforgettable about this movie. Gloria Swanson’s performance is probably one of the best in all of cinema. I can admit that. And that slow and tedious buildup all pays off in with a cathartic climax that is nothing short of surreal, which would have been undercut had the rest of the movie been faster paced. 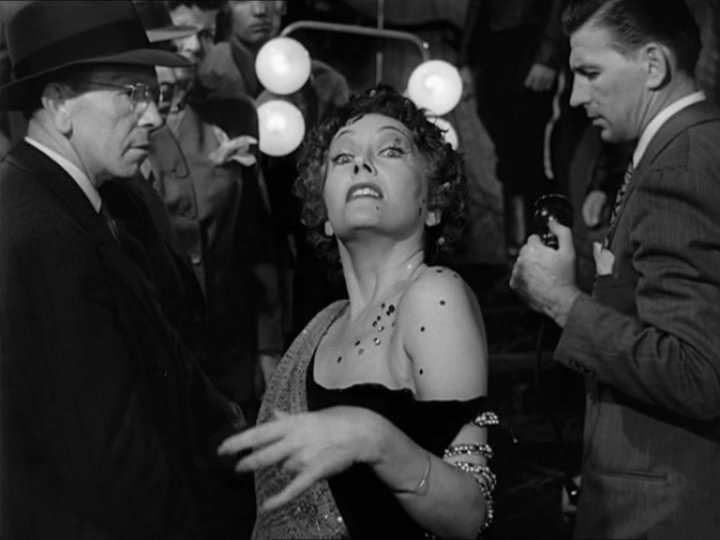 Joe Gillis is a second-rate Hollywood film writer with a few mediocre motion pictures to his credit. Months behind on all his payments, he is forced to hide his car from a pair of suit-wearing repo men. When, by chance, he encounters these collectors while driving the car, he is forced into the shortest high-speed chase in movie history, ending with him discreetly pulling into the driveway of a dilapidated mansion that he mistakes as abandoned.

But inside he finds Norma Desmond, a middle-aged, fading starlet of the silent film era, who lets him in, thinking he is the undertaker she has summoned to bring her a child’s coffin, which she needs to bury her recently deceased pet chimpanzee.

Disgusted to find out he is not who she was expecting, she almost throws him out, until she learns that he is a movie writer. This leads her to make him a tantalizing offer: if he ghostwrites the film that will put her back on the map, then he can live in her mansion and have all his expenses paid for.

Agreeing to her proposition, Joe quickly discovers what a wrong turn he’s made. Norma’s short years of megafame, followed by a lifetime of isolation and obscurity, have driven her insane. She is narcissistic to the point of criminality, and she has no intention of letting Joe leave. Ever.

Once he finishes the script, which Norma sends to legendary director Cecil B. DeMille (played by himself), she reveals that she is now madly in love with Joe, and tries to kill herself whenever he walks out on her. When a misunderstanding leads Norma to believe Mr. DeMille has accepted her screenplay, her madness spirals downward until she is capable of anything, even murder.

The parts that make Sunset Boulevard famous naturally end up being the best parts of the movie. The snappy dialogue and banter inject moments of comedy into an otherwise dark story (and this is a highly-quotable movie). The scenes that take place at Paramount Studios also depict Hollywood with a kind of comic realism, almost like splashing cold water onto the dreams of the starry eyed would-be writers in the audience.

But best of all has to be Norma’s own madness, delivered with such singleminded deadpan that there’s little wonder why this character has served as a template for all future psychos depicted in film. And she certainly steals the show, though her grimly dour butler, Max, is something of an archetype, as well.

And, once again, that closing scene is something that has never been replicated, and is worthy of the study it regularly receives.

Sunset Boulevard suffers a lot of the same drawbacks as many classic films, in that it is too heavily balanced toward great atmosphere and away from great pacing (though most modern films have the opposite problem). It also suffers from a voiceover narrator who explains things that the viewer can plainly see. But apart from that, it’s easy to see why this film is so cherished, and why it was part of the very first batch of films to be selected for preservation by the Library of Congress.

Once again, Netflix has done its customers a service by providing such classic films to a broad audience for no additional cost. And yes, I believe they may find new life on such a medium.

If you have any interest in classic movies, or even movies that provide a strong balance between suspense and comedy, then this might be the cultural experience you’re looking for.

Just remember to get ready for your closeup.