This movie is nearly 70 years old. 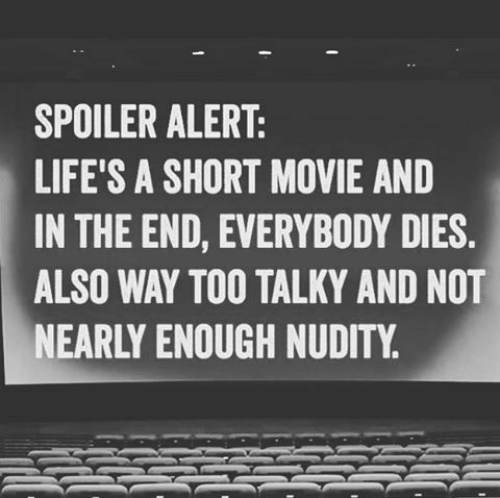 I say this because I need you to understand that there will be spoilers. But they will be spoilers for a movie that is literally 70 years old. So, going into this, we will have to agree to take the following facts as common knowledge:

Great, because we’ve got a lot of ground to cover. This is The Third Man. 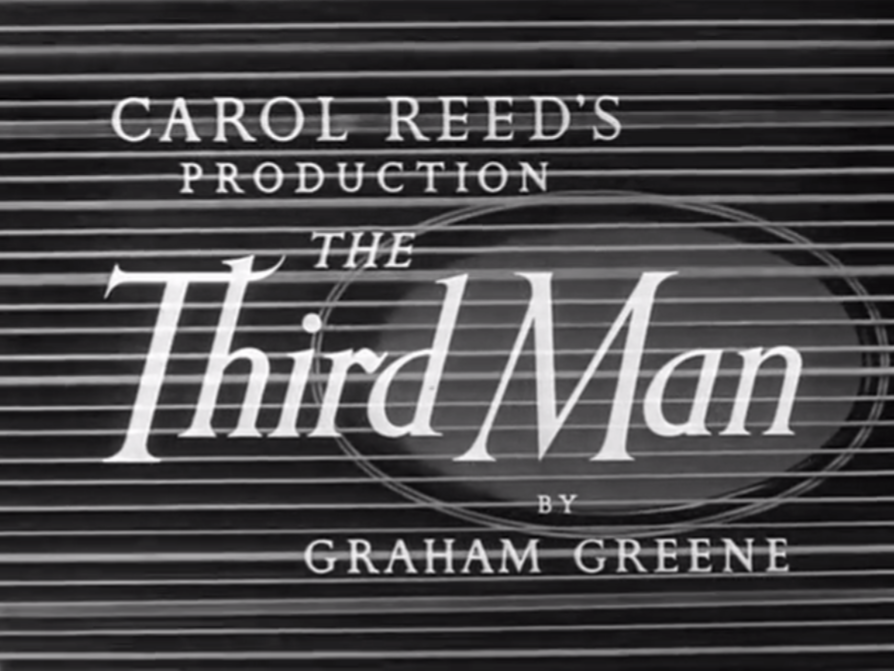 Often hailed as one of the greatest movies of all time, The Third Man is required viewing for film students and a celebrated classic, as well as a paragon of noir fiction.

The film is interesting for a number of reasons, not the least of which being that it was filmed on location, and during the same period in which it was set. The story takes place in post-WW2 Vienna, and it was filmed in 1949 Vienna. So the buildings are real, the art and sculptures are real, and the rubble and ruins created by actual air raids are, yes, real.

So when you see the characters running down a set of warped and broken outdoor steps, or struggling through a landfill of masonry between buildings, and you wonder how the production crew created such realistic ruins, the answer will be that they didn’t. The scenery for this film was created by the actual war. Bombs were the paintbrushes and tanks were the pencils that sketched the backdrop.

For this reason, the film possesses a degree of documentary value. This movie was not a period piece at the time of its creation. For its original audience, it could not have been more contemporary. And the zeitgeist it captures is not manufactured.

Another Clue to the Secret of Iconography 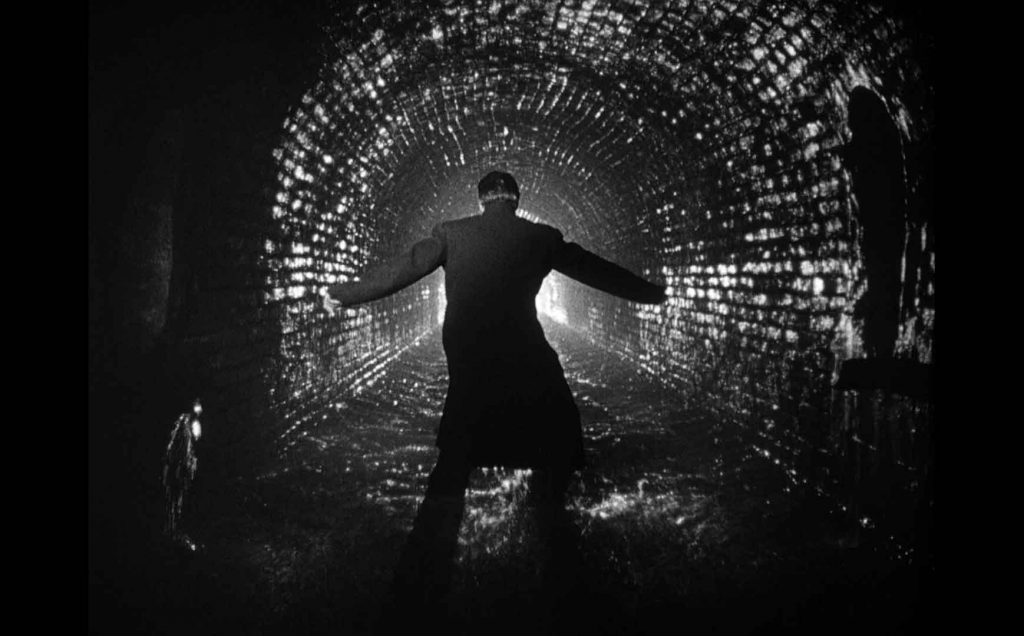 This film is famous for its expressionistic cinematography. And if you are a regular reader of my reviews, you know that I have investigated expressionism as the secret behind creating icons.

In this respect, The Third Man did not disappoint, and I feel that I have collected enough data to confirm some of my suspicions. Screenshots of almost any scene in the film are widely recognized and not hard to find with a simple internet search. Many of the shots alone make the movie worth watching. They are a wonder to behold. 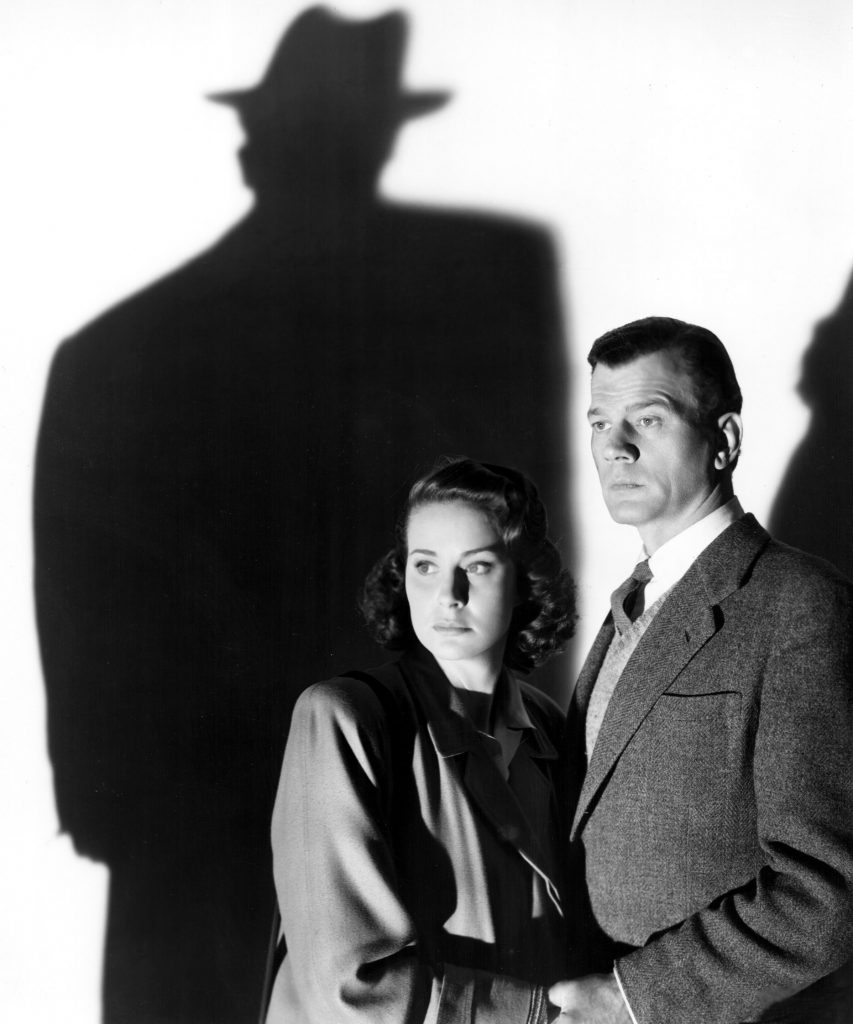 After the end of the second World War, Vienna, a surrendered city, is divided into four zones, belonging to the four conquering allies—America, England, France, and Russia. The city is ruled by martial law, and the coalition between the four allies is uneasy.

In this time of want and destitution, a thriving black market has arisen, with racketeers selling contraband of all stripes. Deals are dealt. Secrets are kept. And, on occasion, lives are lost.

Into this mix is thrown Holly Martins, a writer of paperback westerns and overall hack with a drinking problem. He comes to Vienna at the behest of an old school chum, Harry Lime, who has offered him a job that Holly desperately needs.

But upon arriving, he is told that Harry has died in an automobile accident. He is just in time to go to the funeral before realizing that he has nowhere to turn.

He has, however, caught the interest of Major Calloway, a policeman who wants to know if Holly was party to Mr. Lime’s secret line of work. It turns out that Lime was selling stolen Penicillin on the black market, but watered it down so that he could make as large a profit as possible. The poor saps who used the drug found that it was not strong enough to cure their illnesses—only strong enough to slow down the infection, prolonging their suffering in gruesome ways.

Holly is appalled to hear such accusations, and doesn’t want to believe them, at first. He is further puzzled by the events surrounding Harry’s death, as witnesses cannot agree whether he died instantly or had enough time after the accident to make a few last requests.

Stranger still is the fact that the two men who pulled Harry from the street insist that they were the only ones there when it happened, but one witness insists that they were helped by a third man. 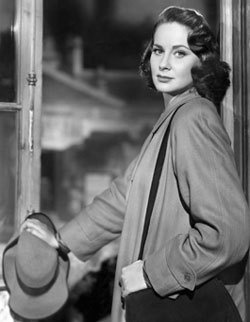 Who claims that Harry was probably murdered. She is particularly indebted to him, since he gave her a forged passport that keeps the Russians from repatriating her. But it doesn’t take long for the allied forces to discover the truth, and soon she is in danger of being handed over to Russian agents.

Holly is in no small trouble himself, after he is falsely accused of murdering one of the witnesses to Harry’s death.

But right when he is about to give up, he sees something unbelievable.

Harry Lime is alive and well. But he is not the man Holly remembers.

Not only is Harry guilty of all the crimes of which he is accused, he is also completely without remorse. The fact that his actions have led to many deaths does not disturb him. He even seems to regard these events with a kind of demented pride, and he relishes all the profit he has made from the suffering of insignificant “dots”—his name for the common people. So confident is he in the rightness of his actions, that he even quips the following:

Don’t be so gloomy. After all it’s not that awful. Like the fella says, in Italy for 30 years under the Borgias they had warfare, terror, murder, and bloodshed, but they produced Michelangelo, Leonardo da Vinci, and the Renaissance. In Switzerland they had brotherly love – they had 500 years of democracy and peace, and what did that produce? The cuckoo clock.

He’s also the one who sold out Anna to the Russians, exchanging her freedom for his security, which he has no trouble confessing with a straight face.

And he still wants Holly to work for him.

This puts Holly in the most untenable of positions: he can work for Harry and become the worst of criminals, or he can work with Major Calloway to capture Harry, and thus become a traitor to his friend. Anna’s fate also hangs in the balance. Such a daunting decision would challenge men of the strongest moral fiber, so what kind of man is Holly?

The entire score for The Third Man is performed on a single instrument by a single musician.

The instrument in question is a zither, and the music for the film is highly influenced by the locality of the story. The fact that such a minimal score accompanies one of the greatest movies of all time is a revelation worthy of study in itself. While this approach does place a number of limits on the film, it cannot be said that any of the scenes were poorly scored, as the music always manages to fit the action onscreen.

The rest of the sound design, however, leaves something to be desired. It was not uncommon, in movies of that era, for the voice work to be subtly muted, as if the actors were talking through a haze. And in the case of The Third Man it can be particularly difficult, at times, to figure out what anyone is saying.

More frustrating still is when these muddled voices are played at the same time as the crystal clear zither music, creating a contrast that is impossible to ignore. It’s somewhat grating, but every great film has its flaw.

The Third Man has earned its place as one of the world’s most celebrated films. It is an intriguing noir detective story, which masquerades as a murder mystery before revealing itself to be a psychological drama and a case study in criminality. It plays with light and darkness, and those are the only two colors it needs to tell a gripping and vicious story.

I recommend it to everyone. There are a lot of people out there who stay away from the really old classics, but even they will likely appreciate the sharp plot and iconography of the piece. It has the chops, and I was highly impressed.

It’s on Netflix right now, along with a number of other classic films. If you’ve never seen it before then you simply must indulge.