I did say, in an earlier post that this blog would be about many different kinds of things, not just writing.

And it goes without saying that, apart from being a writer, I am also a consumer. Like you, I buy things, either because I have to or because I want to. And I do not like being coerced into buying things I don’t want, or shelling over more money than is necessary. And I really don’t like it when companies seem to think I have no alternatives to buying their product.

Which brings me to Comcast, or, as I like to call them: “the new Blockbuster Video”. Hm…perhaps I can emphasize this better through a graphic. 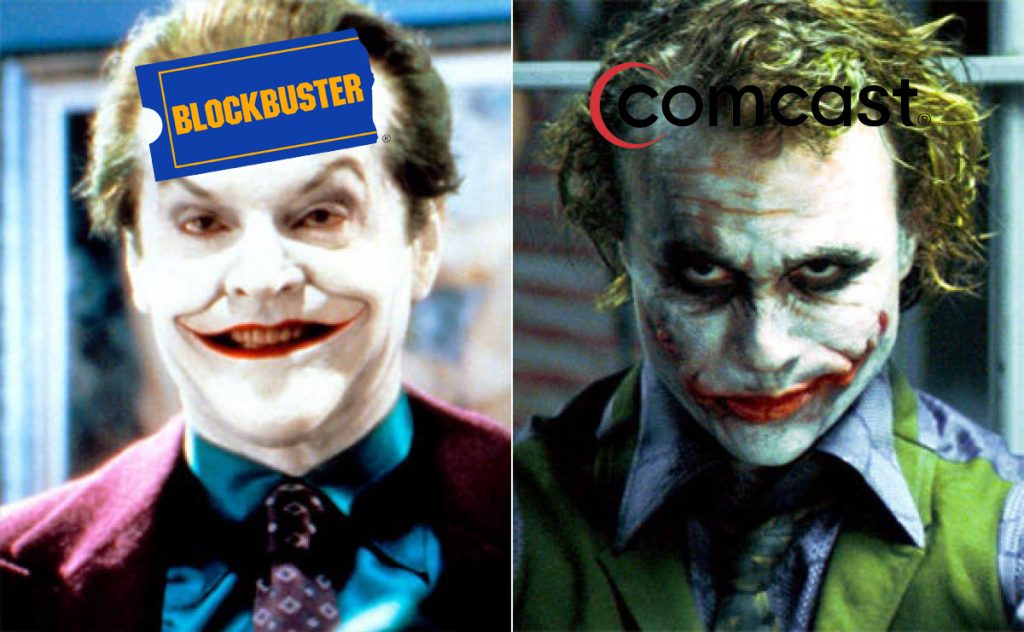 “You wanna know how I got these scars? It was from dancing with the devil in the pale moonlight.”

Now, I know this comparison seems a bit extreme, but if we step back to look at the similarities, it makes a lot of sense.

For a long time, Blockbuster was a money-making juggernaut, but its business model depended on treating customers like dirt. And so, the moment a viable alternative appeared, all of Blockbuster’s customers fled like rats from the Titanic, and the company went belly up. Comcast now holds a position similar to Blockbuster’s golden age, except that Comcast is even more powerful. But, like Blockbuster, it holds a virtual monopoly over a particular market, and thus can maximize profits by treating its customers poorly. So, once again, as soon as a viable alternative appears, Comcast is gone. Kaput. Dead as the dodo.

But, unlike Blockbuster, Comcast has to work on a shorter timeframe. Technology is moving much faster now than it was in the first decade of the new millennium. In fact, the alternatives to cable service already exist. All that remains is to get a majority of people to adopt them.

Let me use my own experience as an example.

I have a Comcast service for my TV and internet. Lately, I got a new HDTV. I love my new TV. It is big and beautiful, but the images on the screen (which I was getting through my cable connection) were blurry and low resolution.

It turns out that my cable box is an SD (standard definition) device. It can’t even read HD (high definition) signals, much less channel them into my HDTV.

So I call Comcast, asking them to give me an HD box, wondering why I wasn’t given an HD box when I first signed up for service three months ago. The answer: HD channels cost extra. Instead of paying $60 a month, I would have to pay $120 a month for the upgrade (although they claimed they would graciously shave $10 off that price if I signed up right then and there).

Normally, I would agree. But consider this: standard definition is now obsolete. The United States government has now banned standard definition wireless broadcasts. I can get a large number of HD channels through my digital antenna for free. Yet, to get those same channels from Comcast would double my cable bill.

My friends, HD is now the standard. HD is basic programming. Comcast has no more right to charge extra for HD than they would charging extra for color images or stereo sound. And imagine what Comcast’s customers would do if the company decided to start broadcasting in black and white unless a “premium package” was bought.

Now, I understand that HD images and sound take up more bandwidth. And that will always be Comcast’s excuse for not providing HD channels in their basic packages. But what do you think would happen if every Comcast customer were to buy HD service? Would Comcast run out of bandwidth? Would they throw up their hands and say, “Sorry, we can’t take any more HD customers. We’ve run out of HD. The quota has been hit and we can go no higher.”?

And, more importantly, they now have competition.

Alternatives to Cable and Satellite TV

Like I said before, you can get many HD channels through a simple device called a digital antenna. You can get one at any electronics store. The lower end ones are about $20. The higher end ones are around $100. But, in either case, an antenna is a one-time purchase, after which you get all local channels in HD, for free, forever.

But what about national channels that are cable-only? Well, those can be gotten online through video streaming services.

I’m not just talking about Netflix, which is good at delivering old favorites and last-year’s TV seasons. I’m talking about services like Roku, that stream almost any channel you can think of through the internet into your TV. Or iTunes, where you can permanently buy the latest episodes of your favorite TV shows to watch commercial-free, forever. Why on Earth would anyone need cable TV service anymore?

Oh, right. We still need cable to get the internet.

Good news: a number of new, fiber optic networks are now sprouting up across the country. Comcast likes to flaunt the fact that its Xfinity service is many times faster than CenturyLink’s service. And that is true…for now. But CenturyLink is implementing a fiber optic network that is coming to my area pretty soon. And, if you are lucky enough to live in Provo, Utah, or some other select places, you can get Google Fiber, a lightning-fast internet service.

Once you have one of these, what purpose will Comcast serve? Will Comcast be any more useful to us in the future than Blockbuster Video is now? Think about it. Think about all the other things you could be doing, once you are no longer chained to your cable company.

And truth be told, I am actually behind the curve when it comes to ditching one’s cable provider. I’ve only done it partially, but there are people all around my state who have done it completely, who are already free. I’m going to join them soon. And so can you.

Of course, you don’t have to do it just because I told you to. But then, you’ll have to do it eventually, because once Comcast loses enough customers, they will die just as quickly as Blockbuster did. And when they’re gone, video streaming will become the new normal. So, I would argue that it is better to do it sooner, rather than later.

My friends, the future is going to be quite good to consumers. It is not going to be so good to the people who would overexploit them. So remember this: don’t let Comcast bully you around. And they will try. They will pretend that you have no other alternatives, hoping that you are one of the few people ignorant enough to believe that. Make sure you let them know that you already have a plan B waiting in the wings, and when you negotiate with them, do so from a position of power. You’ve earned it.

[This week’s tagline: “Where the elite come to get paid.”]