Steampunk just keeps getting more and more mainstream, and I can hardly keep up with it. 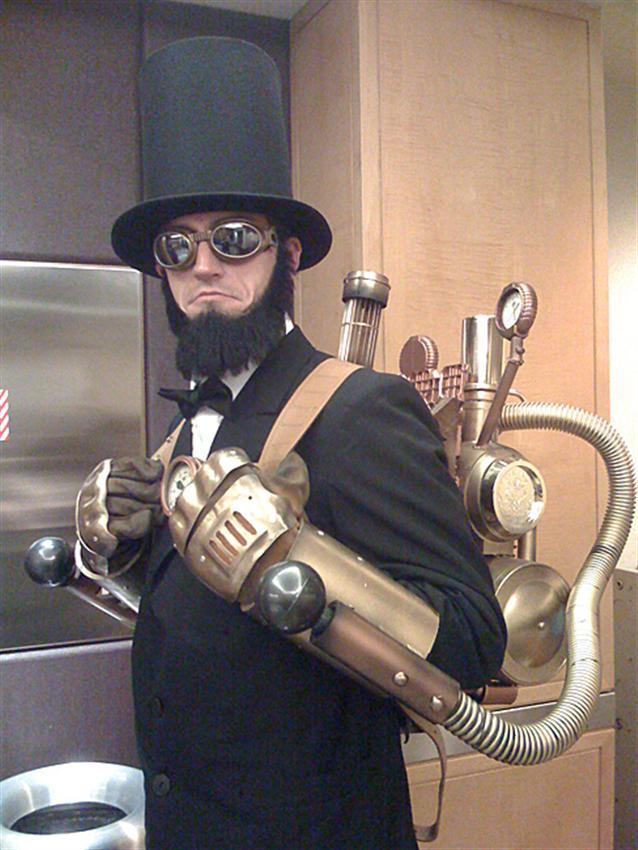 Four score and seven years from now, we shall all be flying dirigibles.

And every day people are constantly asking me, “Where are the steampunk movie reviews? We want more steampunk!” And I just have to beat them off with a copper-banded, steam-powered stick.

But I can’t keep up the fight forever. No one can escape the cold, Dickensian allure of the steam age for long. For this reason, I have finally acquiesced and decided to review a (relatviely) recent example of the genre.

This is April and the Extraordinary World. 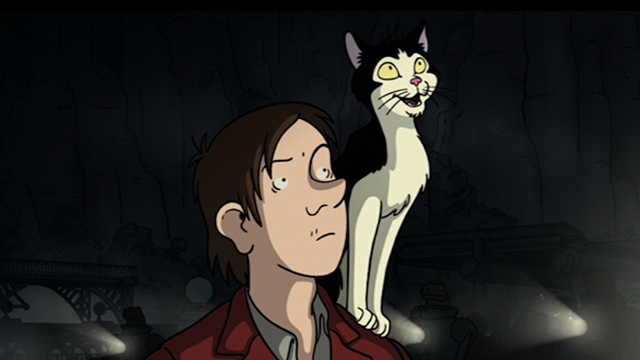 Netflix does not offer this film in its original French. It can only be watched with an English dub. Furthermore, no subtitle options are offered, meaning that the hearing impaired are prevented from being able to experience this movie on Netflix.

Sadly, the English dub of the film is not particularly good. The lip sync is subpar, but I could overlook that if it weren’t for the fact that the English voice acting is so terrible. It’s as if the actors were specifically directed to deliver their lines without any kind of life or feeling.

The one shining exception to this is Susan Sarandon’s contribution as Chimene, whose calm fanaticism is deftly voiced. How she got away with actually acting when everyone else was forbidden is an unexplained mystery. 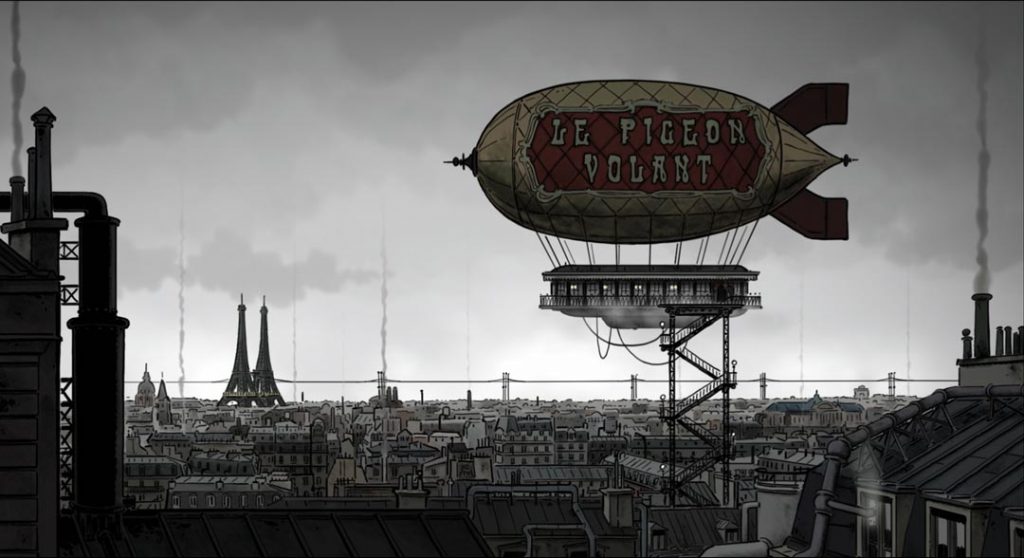 Extending a steampunk backdrop into the mid-twentieth century requires a bit of creative accounting. As such, April and the Extraordinary World is an alternate history story, as well as a steampunk one.

In this world, the Franco-Prussian war never happened, resulting in an uninterrupted Napoleonic dynasty, with a long line of emperors ruling France well into the twentieth century.

Also during this time, the world’s scientists keep getting abducted before they can share their discoveries with the world. As such, electric technology never gets invented, and machinery continues to be steam powered all over the world. This requires massive consumption of coal and timber, and leaves all of Europe as a polluted wasteland, while France prepares to wage war against Canada for a share of their boundless forests (a plot thread that, amazingly, never goes anywhere).

The second rate scientists, not extraordinary enough to get abducted, end up pressed into service for the military to build weapons.

After explaining all of this in a somewhat tiresome, voice-over prologue, we are finally introduced to our characters, a young scientist named April, and her talking cat, Darwin. 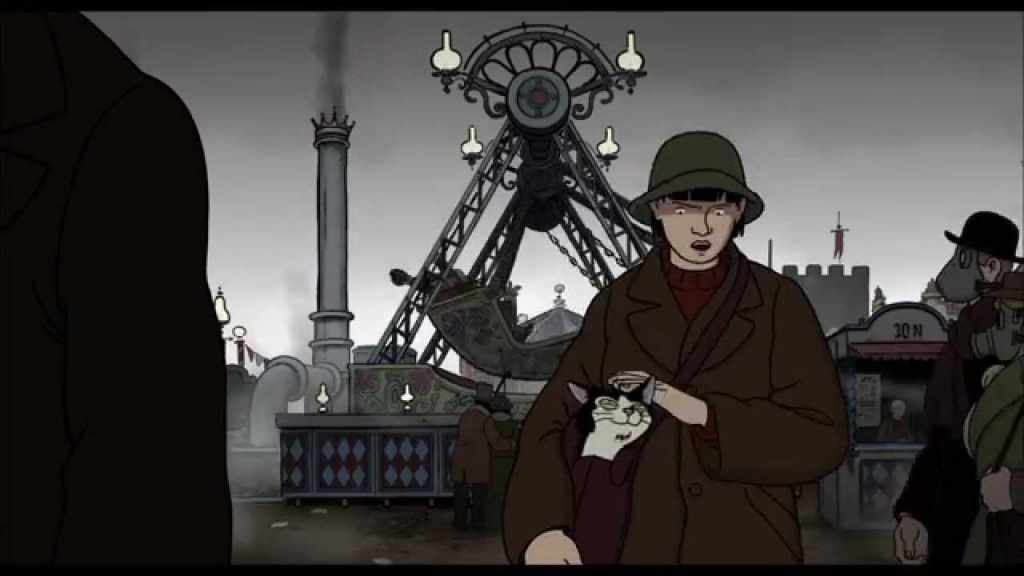 April’s parents are among the missing scientists, and her scientific pedigree is extensive, as her family has spent the last four generations attempting to create a serum that bestows invincibility, and even their failed attempts have had remarkable side effects (such as Darwin’s powers of elocution).

She works tirelessly to perfect the formula, hoping to one day reunite with her grandfather, who has somehow escaped both the mysterious abductors and the French authorities.

But she is unprepared for the meddling of a streetwise thief named Julius, who is covertly working for the police to uncover the location of April’s grandfather. As she befriends him, she finds herself suddenly pursued by the same shadowy force that took her parents.

And I can’t say any more without spoiling the whole movie. 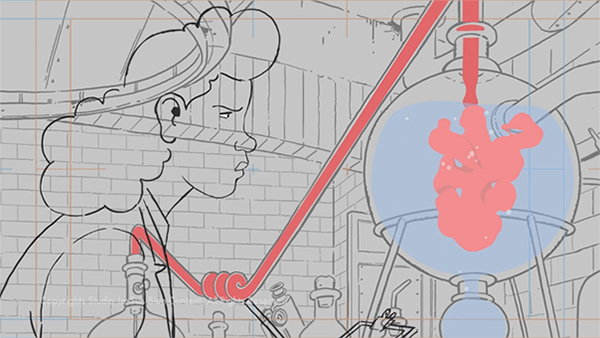 Although, keep in mind that this opinion comes from someone who loves 2D animation, and has been frustrated for years by its absence in new movies.

Of course, “2D” does not mean “hand drawn”. The visuals are still computer generated, and I’m fine with that.

Because on the whole, April and the Extraordinary World has flawless animation, and the effort made here should be held up as an example to some of the Hollywood studios who have ignorantly abandoned the art form. 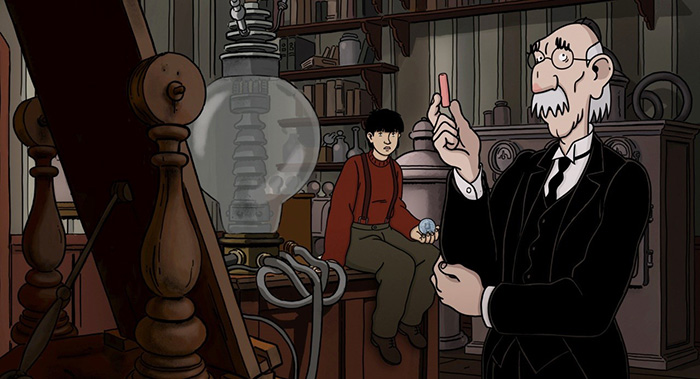 The poor voice acting makes it difficult for me to objectively judge the characters. I cannot help but wonder how much more convincing they could have been, and probably are when they speak French.

That said, I can say that the April may actually be the least interesting character in the movie. Like many protagonists, she is kept as a mostly blank slate for the viewer to fill in themselves. But she is surrounded by eccentric and fascinating people, and the story arcs of her family members are engaging.

But as for the romance between herself and Julius, well…it’s not written well. It’s not exactly shoehorned into the plot, but it is definitely rushed.

Also, the film tries a bit too hard to be a Miyazaki movie, to the point where they include a “lesser villain who eventually allies with the heroes” character. But this plot thread goes nowhere.

April and the Extraordinary World is a solid B- of a movie.

I’d give it a higher score, but I can’t get past the mediocrity of the English dub. If Netflix had provided me with subtitles, I have every reason to believe that the film would have risen to the A-range.

That said, it is one of the better offerings on Netflix. It is a feel-good film with solid themes and structure. And I would gladly watch it again with other people.

You should definitely give it a try. It might not become your favorite movie, but it still shouldn’t be missed.