As Netflix becomes bigger, there are increasing concerns about how it may yet still transform the media landscape.

After destroying the home video rental empire (as part of the coalition with Redbox and iTunes) some analysts are convinced that they may destroy the theater industry, as well.

With ever more affordable home theaters and gigantic uber-HD televisions, the theater experience is becoming more and more redundant as it also becomes more unpleasant, and Netflix is poised to seize the reigns, with high-caliber shows like Stranger Things and Hollywood-quality films like the upcoming Will Smith vehicle, Bright.

It may one day be the the medium through which all new movies are watched. But that is not yet the case. Right now, Netflix original movies serve a different purpose.

Consider the case of Little Evil. 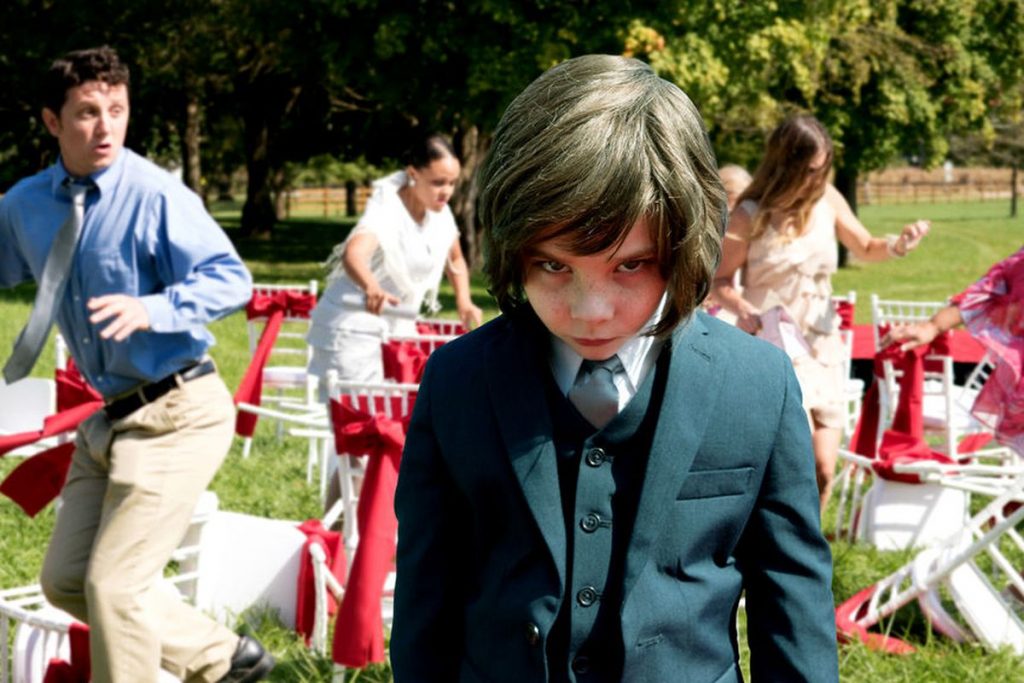 A horror parody starring Adam Scott and Evangeline Lilly, Little Evil is one of those movies that seems to have found itself on Netflix not because it is trying to disrupt the billion-dollar theater industry, but because, as a film, it just wasn’t good enough for a theatrical release.

Though that’s not to say it isn’t a good film. 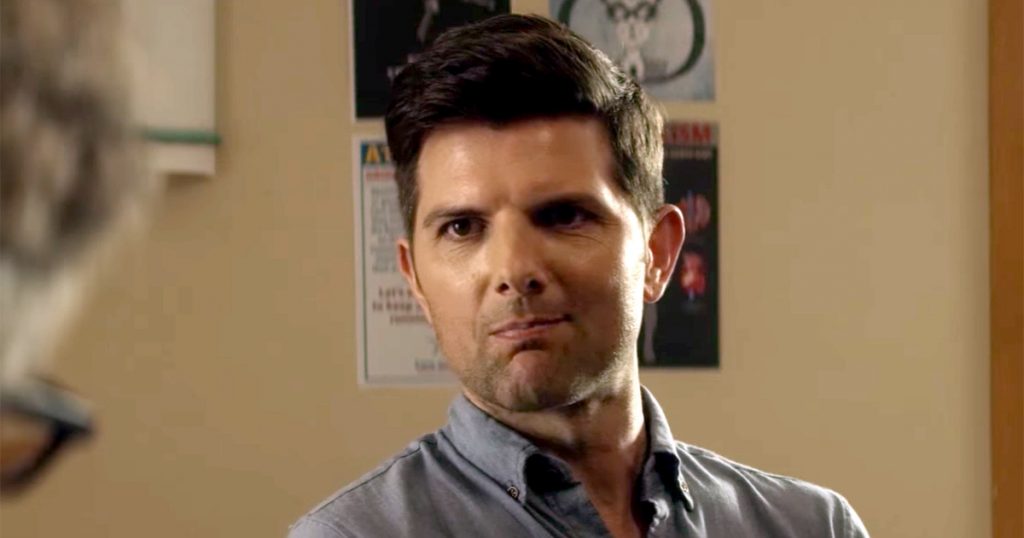 Basically, it’s a take on the idea of a blended family, from the point of view of the stepfather. Such families often encounter friction between the new parent and the stepchildren, but what if the child is literally the Antichrist?

And that’s where we find ourselves with Adam Scott’s Gary, whose stepson Lucas is literally hellspawn. After his wedding to Lucas’s mother is bizarrely interrupted by a freak tornado, he begins to have suspicions about the boy’s biological father.

But Gary has his own problems to work out, having grown up in a fatherless home, and therefore deemed less than fit to raise such a troublesome child, he is put in a therapy group with other stepfathers, all of which have trouble with their kids.

As little Lucas’s sixth birthday approaches, he become more and more…uh…murderous toward his stepfather. And Gary begins to suspect that the only way to prevent Armageddon is to do unto Lucas what Lucas would do unto him. 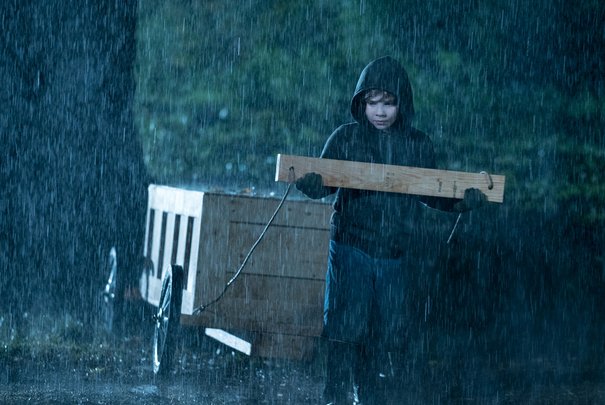 Little Evil is not written well.

Though, on the other hand, it does very well with its dark comedy. When it dares to go to grim places, it is genuinely funny.

Further humor is provided by the quirky stepfathers in Gary’s group therapy, though I suspect some of their best lines were ad-libbed. Evangeline Lilly also gets her share of laughs as Lucas’s mother, as she insists, time and again, that her angel of a son can do no wrong, and carries that attitude to hilarious extremes.

And so good is the humor that the lackluster writing could almost be completely overlooked. But there’s a problem. 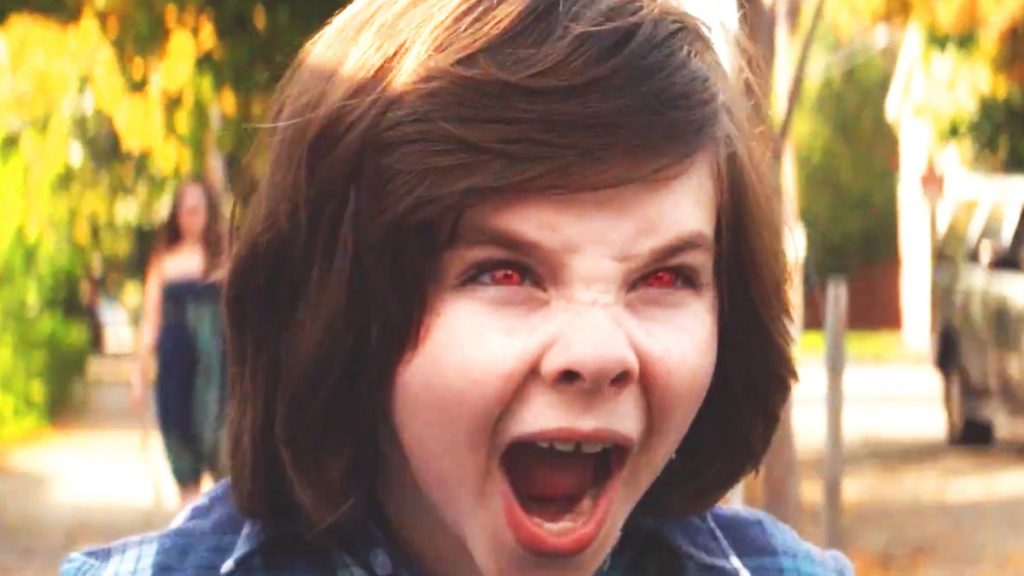 The humor is good, but there’s only so much of it. Long stretches between good jokes make for mediocre viewing.

This becomes even more of a problem in the third act, where the story tries to wrap itself up in a heroic climax, proceeding to a happy ending, as if this were a typical Hollywood 90s flick. And that’s just not how this kind of story needed to be played out.

The premise of being the stepfather to the Antichrist is one of those high-horror-meets-everyday-life situations made so popular by the “Treehouse of Horror” episodes in The Simpsons.

And I believe that Little Evil would have been better served if, like most Treehouse of Horror episodes, it didn’t have a happy ending.

Stories where horror and humor collide have the opportunity to be quite cathartic, as you get to see bad things happening to bad people. If, instead of aiming for a sweet ending with a moral lesson, the writers had escalated the horror to ridiculous ends, resulting in the end of the world, the movie would have had a greater impact.

Or even a bittersweet ending, with characters simply deciding to get used to a horrible situation, would have sufficed.

As it stands, Little Evil was undercut by its attempt to humanize Lucas, turning him from an unspeakable force of nature into a more approachable character (the film goes off the rails the moment he delivers his first spoken line).

Little Evil is a film that needed one more pass through a good script doctor before filming.

It is so close to being a great comedy, and has a number of excellent moments, but fails to sparkle as a whole.

That said, it is a highly watchable movie, and though the story was its Achilles’ heel, it did dare to explore important questions about destiny and free will in ways that other films have not attempted.

All the same, though, I think Terry Pratchett and Neil Gaiman’s Good Omens does a better job parodying the “End of Days” genre. And since Good Omens is becoming a TV miniseries in 2018, you may have a valid point of comparison soon.

Let’s hope it comes to Netflix.