This marks the second time this year that I’ve had to stop watching a Netflix original movie halfway through the runtime because of a topless nightclub scene.

In any case, this is Netflix’s Bright.

Not the Paradigm Shift We’ve been Waiting For 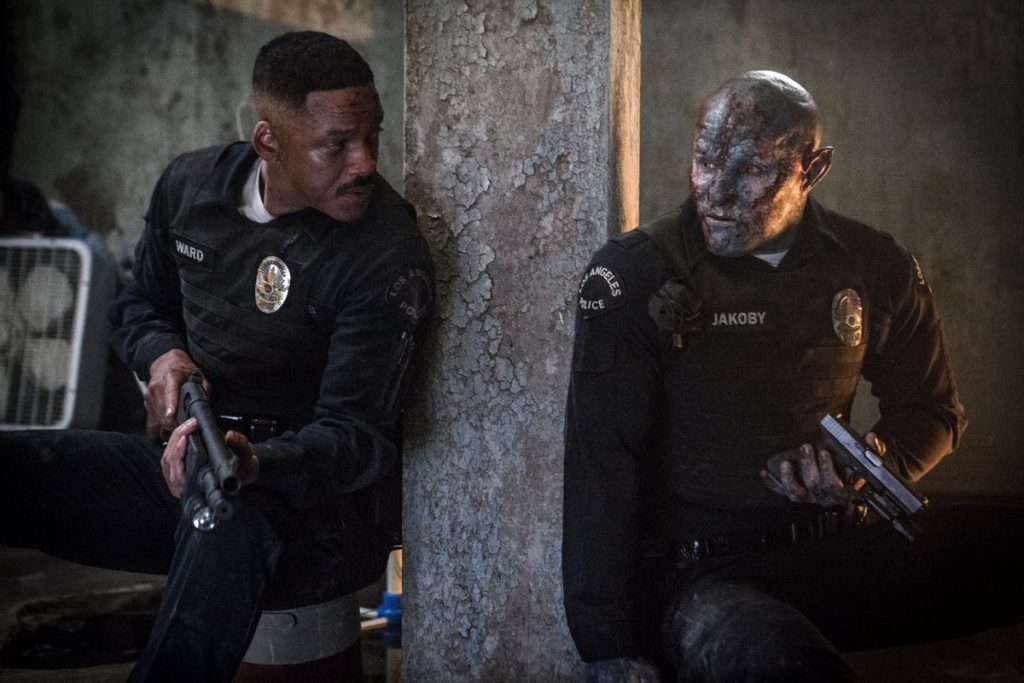 It is particularly important that we talk about this movie.

Not really because of anything within the film itself, but because it exists to begin with. Netflix has already proven that it can and will be the new format for watching television shows. It has done this through such flagship series as The Crown and Stranger Things.

And it seemed inevitable that they should do the same thing with motion pictures. Lagging theater attendance and the cloud of malaise hanging over Hollywood are driving more and more people to seek other forms of entertainment. And Netflix could fill that niche without moving any mountains, as far as the way movies are produced.

Bright, being a vehicle for an A-list actor, was the natural turning point. This movie was supposed to be the catalyst, the chosen one.

It wouldn’t be the first “chosen one” to let us down. 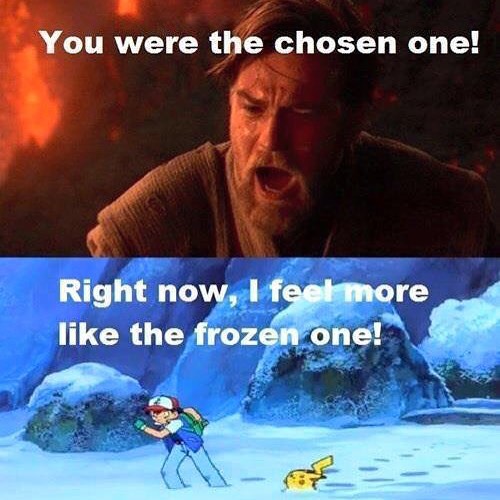 Like Little Evil before it, Bright starts with a million-dollar premise and squanders it. The result, again, is a movie that premieres on Netflix only because it is not good enough for a theatrical release. Movies of that caliber will never be enough to force the industry to evolve.

And the sad part is how it could have been avoided—how close this movie was to being that tipping point that changes everything. With a little more care given to the production values, and the writing, we could have had a blockbuster on our hands.

Apart from that, there was another showstopping problem.

The Problem with Lewdness

As I said before, I had to stop watching this movie as soon as they threw in explicit imagery.

Bright is rated TV-MA, but the TV rating system is a lot less useful than MPAA movie ratings. As an example, consider that Archer is also rated TV-MA, yet the content level of Archer is absolutely not even in the same hemisphere as Bright.

And Bright may be a true-crime drama (in which some racy content may be expected), but it is also a high fantasy story (which, despite the popularity of Game of Thrones, is still overwhelmingly a genre for general audiences), so it can’t hide behind the excuse that people should have expected lewdness where none was advertised.

And none was advertised. Not a mote of the promotional materials gave any hint that there would be nudity or R-grade language.

As such, the racier bits of the movie couldn’t help but feel like a lot of pandering. 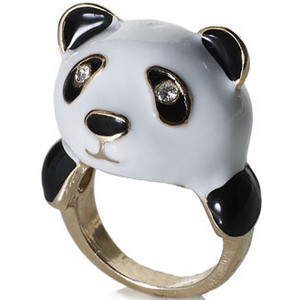 Pandering to any 12-year-old boys whose parents don’t know what they’re watching on Netflix. And, as it was with the Death Note remake, so it is here: a flash of pornographic content to distract from structural flaws.

But What about the Message? 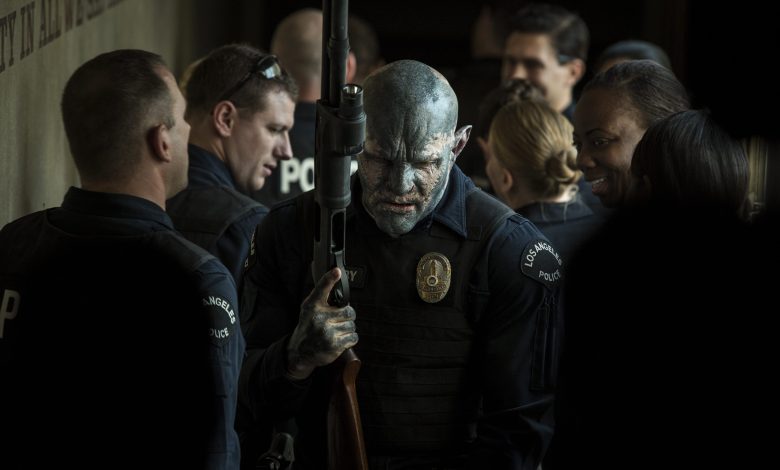 In an attempt to buy an indulgence, Bright sugarcoats its poison pill with a hamfisted moral about race relations, set against the backdrop of policework.

And this message would be rather revolutionary, if it hadn’t already been done so much better by a still-recent Disney animated movie.

Although, to be fair, Zootopia also had a nude scene, but it served only as a kind of joke (and was tastefully done).

So Let’s Talk about the Story

Because this is supposed to be a review, after all. 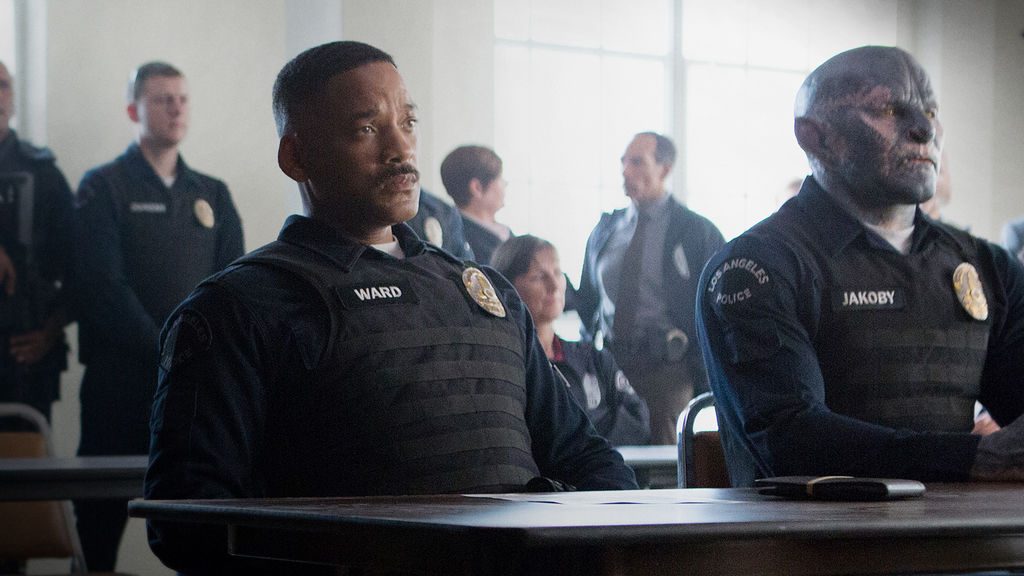 Imagine that at the end of The Lord of the Rings, the elves decided not to leave Middle Earth, and instead remained in the world of men all the way up to the present day.

That is pretty much the central conceit of Bright. An evil overlord was overthrown 2000 years ago. Orcs fought for him, and all the other races fought against him. As such, orcs are a marginalized demographic in the modern era, whereas elves live posh lives of privilege.

And since the power of magic can do anything, in this world it is the center of the power hierarchy. A few elves, and even fewer humans, are born as “Brights”—people who can control magic. If a bright possesses a magic wand, then there is almost nothing they can’t do. Whereas if a non-Bright even touches a magic wand, they die. And that’s the only way to find out whether or not you are one.

But if three brights with three wands come together, then they can even resurrect the ancient dark lord. As such, magic is highly regulated, and the FBI has a special task force for investigating magical crimes.

Into this mix is thrown Will Smith, playing a cop who is only five years from retirement, and who has been saddled with the first-ever orc to join a police force. The orc is hated by his fellow cops, but is also seen as a race traitor by other orcs. And when the two of them find a elven bright who has stolen a wand, the entire city of Los Angeles is going to want their heads.

A Tragedy of Circumstance? 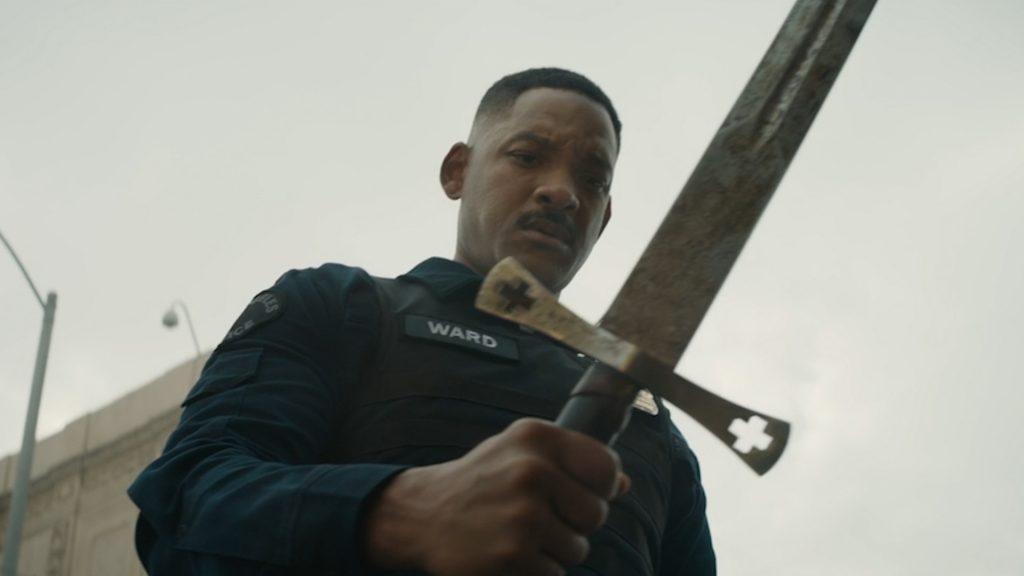 This movie had a lot of potential. And many of its biggest drawbacks are not the fault of the film itself.

However, it has pointed out certain truths about Netflix’s potential takeover of the movie business, and has highlighted the obstacles that remain in such an endeavor.

It is in light of this that I issue the following spooky prophecy:

Unless streaming services get their original movies rated by the MPAA, or come up with their own system which is more specific and well defined than the current TV rating system, they will NEVER replace theaters or disrupt the Hollywood business model.

My judgment in this matter is skewed, I admit, since I did not watch the entire film, and I am prejudiced against movies that include lewdness, particularly when it adds absolutely nothing to the story. But even if I look past that, it still feels like a major letdown, knowing that we still have to wait for a Netflix original movie that truly breaks the system.

I can’t recommend the film to anyone. It doesn’t especially work as a high fantasy or as a police drama. And honestly, I hope audiences send Netflix a message by not putting up with such B-material.

They can do better, and we should demand better.