Before you run away in horror, let me assure you that today’s review does not concern the live-action version.

Because I’m done putting myself through the torture of watching live-action adaptations of anime.

No, this review shall confine itself to the animated version.

But, of course, we then have to ask ourselves,

A Tale of Two Fullmetals

Because Fullmetal Alchemist, like some other mangas, has received more than one anime adaptation over the years. And—surprise, surprise—both of the animes are now on Netfix. 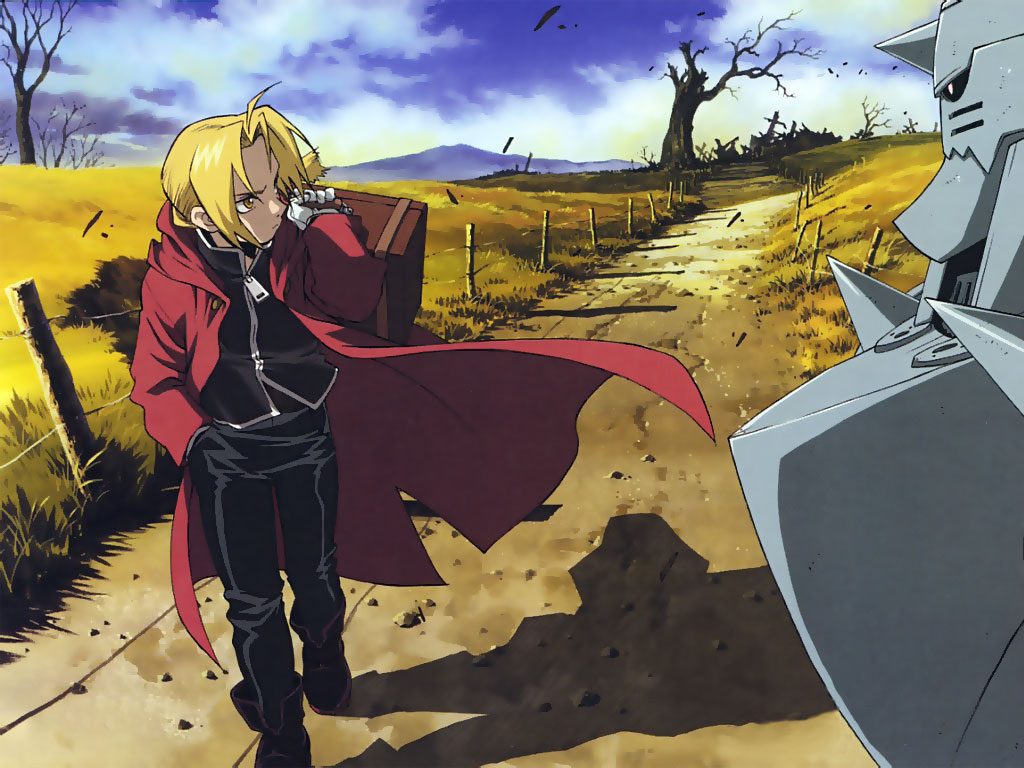 And as I was mostly unfamiliar with the series, I found myself tasked with deciding which series to review first.

It wasn’t the easiest question to answer, since opinions about each anime vary among other critics. The rebooted series, which I will refer to as Brotherhood, was made with the intention of staying faithful tot he manga. The first series is not so different as to be unrecognizable, perhaps, but it is very much its own beast.

Having answered that, I dug in to find out what all the fuss was about.

Fullmetal Alchemist is a fantasy anime about people who use magic.

Yes, magic. What they do in this series is not science, no matter how much they make that claim.

Still, since the series at least touches upon the subject, we should at least familiarize ourselves with what alchemy is. 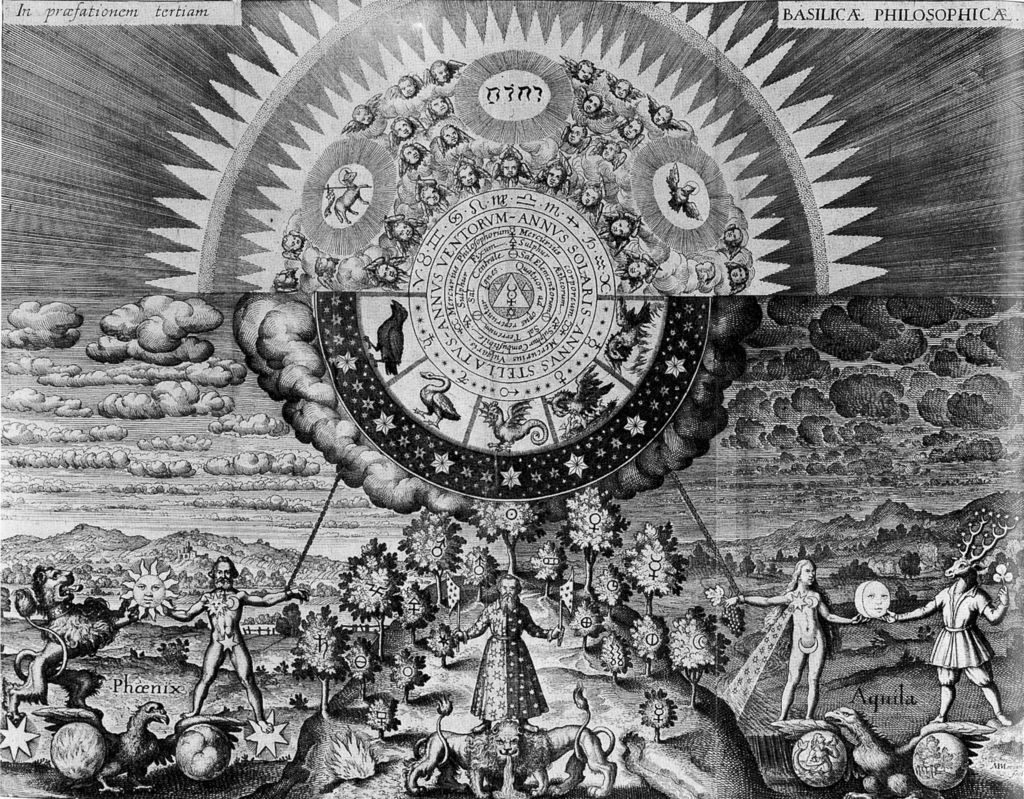 Alchemy is a medieval pseudoscience that acted as a precursor to modern-day chemistry. Like chemistry, it concerned itself with manipulating the properties of various substances.

However, alchemy was primarily concerned with the idea of purifying matter and awakening hidden properties said to be sleeping within it. And its search for new elements was mostly focused on the search for one in particular: lapis philosophorum—the Philosopher’s Stone.

Many alchemists claimed to have succeeded in creating the Philosopher’s Stone, but, in true shyster fashion, they would only reveal their formula as a series of cryptic instructions without any definite measurements or descriptions. These often took the form of intricate geometric designs. 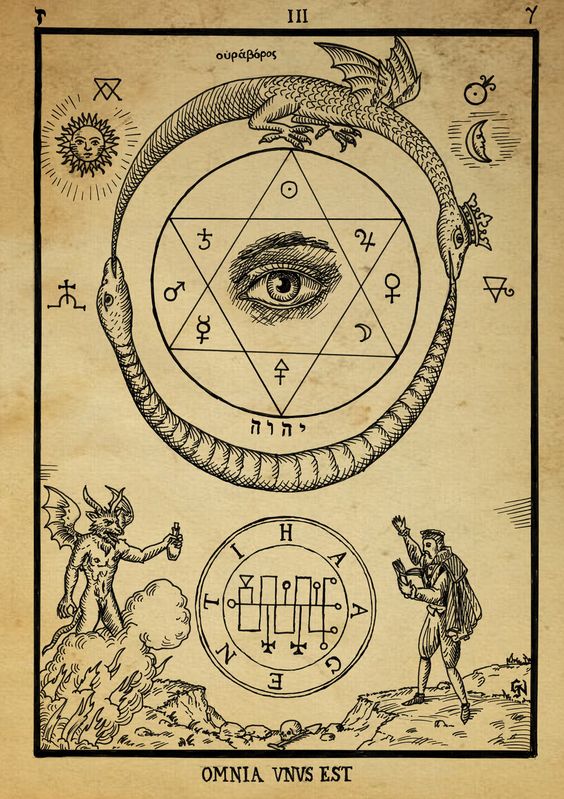 The idea being that only a worthy practitioner would be able to decipher the master’s formula and recreate their results. If you failed to replicate the master’s results, then that was only proof of your own unworthiness.

A number of other feats were considered alchemical, including the creation of homunculi—artificial humanoids conceived in the laboratory that would then become servants of the alchemist.

But even while alchemy strove to make real achievements, and alchemists ended up discovering many useful chemicals, it was no more legitimate than any other kind of magic, and was rampant with fraud and false hope.

So They Made It into an Anime 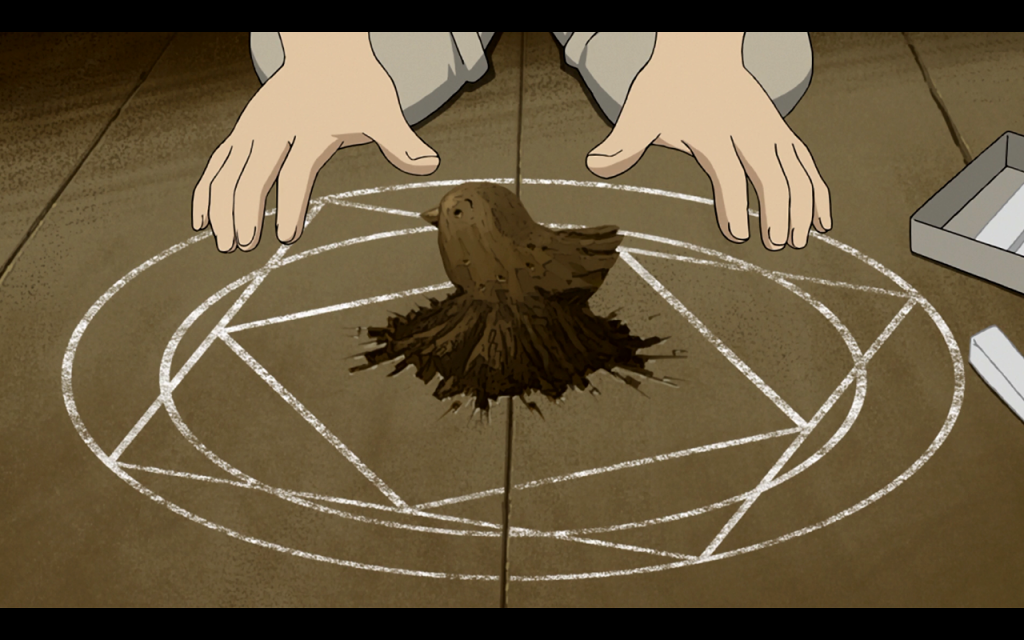 In the world of Fullmetal Alchemist, alchemy is more of a mystical force than a scientific discipline. Alchemists change the composition of matter by putting that matter inside a magic circle and performing some hocus pocus (in this respect, the show’s “alchemy” more resembles Renaissance conjuring techniques than anything alchemical).

However, the story claims that this form of alchemy is limited by the “Law of Equivalent Exchange”, which prevents the creation of objects without the requisite amount of raw materials. When creating nonliving objects, this process is easy enough. But if an alchemist tries to create a human being…well, there’s going to be trouble.

Enter the Brothers Elric—Edward and Alphonse. 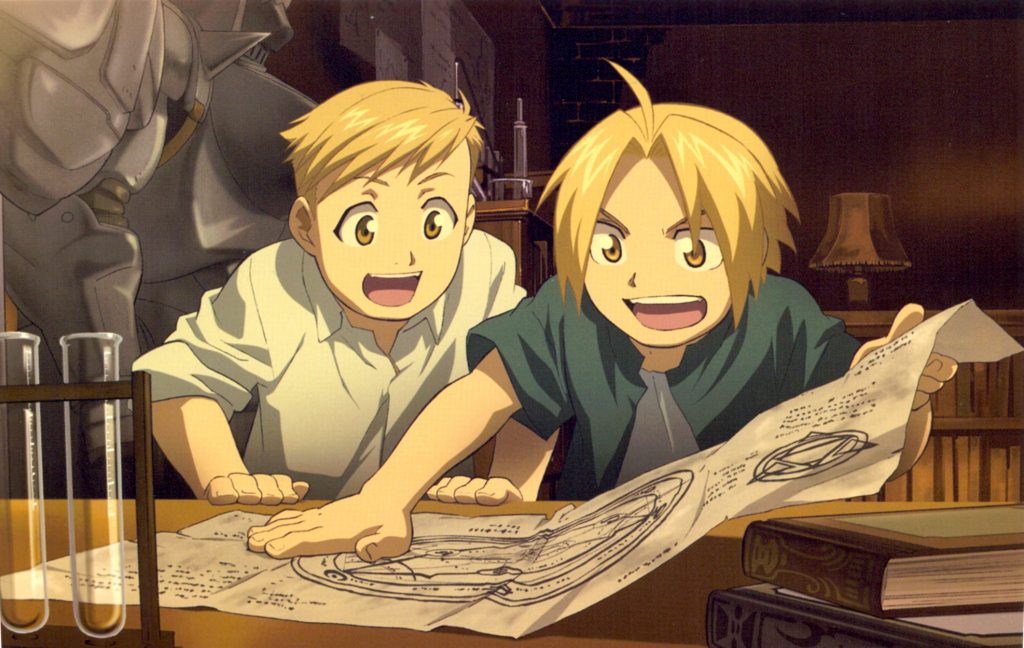 They love their mama. Their mama dies. So they decide to recreate her using alchemy.

They gather the all the elements, in the proper quantities, that compose an adult human body. They put it all in a magic circle and…

No kidding. That’s what happens.

Edward loses an arm and a leg, and Alphonse’s body is taken away completely. Al is only saved at the last minute as Ed seals his soul into an old suit of armor, which functions as his new body. 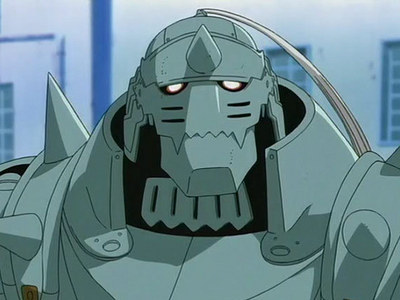 And after fitting Ed with some artificial limbs, the pair now seeks out the philosopher stone, which will allow them to ignore the law of equivalent exchange so they can restore their human bodies.

In the meantime, they will have to make their way in the world, but since their only skill is alchemy, that means working for the military. Because in a world where magic is real, it is going to be used for martial purposes (obviously).

Ed lands a job as a state alchemist, serving in the army of the Fuhrer. 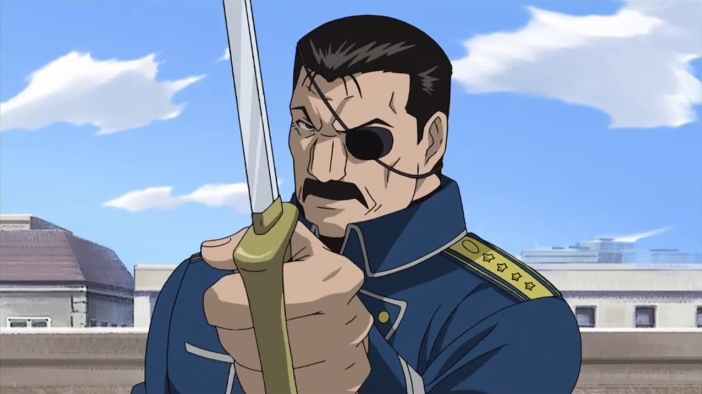 At the end of the series, the Fuhrer turns out to be a bad guy. And no, that’s not a spoiler, because even if you ignore his eye patch and his black moustache, the guy’s name is literally THE FUHRER. You can see his badness and betrayal from a hundred miles away.

But he’s not the only villain in town. The brothers are also being tailed by a mysterious group of homunculi, who keep killing innocent people wherever they land. A strange man called “Scar” also keeps showing up, and his hatred of all alchemists manifests in deadly ways.

Trapped by their obligations to the military, Ed and Al get lost in a history of conflict and conquest, all strangely connected to the Philosopher’s Stone.

When all their questions are answered, an impossible choice will still await them. 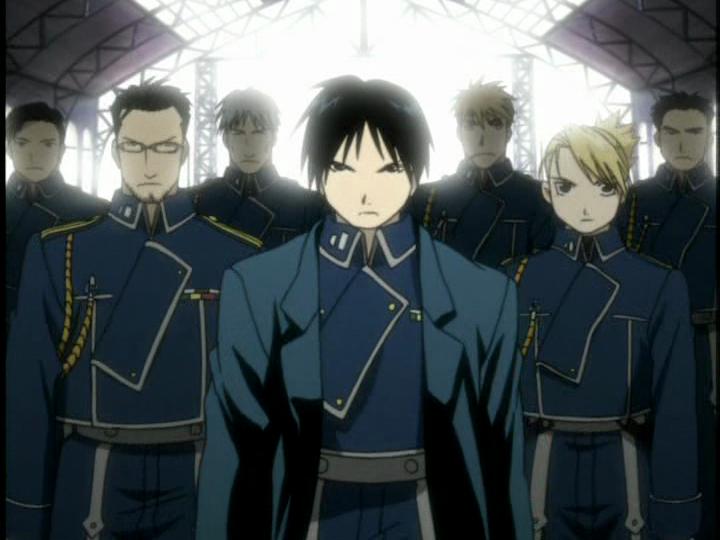 A disproportional amount of FMA‘s runtime is dedicated to characters who are not the Elric brothers.

Chief among these are other military members, some of whom have only little contact with the brothers. Colonel Mustang is their commanding officer, and he has his own arc as he tries to unravel the secrets the Fuhrer is hiding.

Major Hughes is another character, who performs most of Mustang’s investigations, even though he technically does not answer to him. Their long and twisted relationship is explored in the series almost as much as Ed and Al’s is.

This causes problems when one of the parties discovers something that the other party has known for twenty episodes. The audience is, in this way, submitted to a “shocking revelation” that they already knew about, yet the story still treats it like some huge event.

And What was with that Ending?

I won’t spoil anything here, but I found the ending of the series perplexing. I know only a little bit about Brotherhood, but I knew enough to realize that FMA‘s ending comes completely out of left field. And it doesn’t exactly jive with the rest of the series. It felt like the show was building up to something that should have been more satisfying.

It has the makings of a good anime in there somewhere, but it just gets lost in subplots that aren’t as interesting as what’s going on in the main story, and when the time comes to wrap up that main story, it drops the ball.

It has fun moments, including some welcome humor. But the action, by anime standards, is sub par. They don’t show off the magic in cool and eye-catching ways, and every potential action sequence is interrupted by exposition. Exposition was the guiding force in this show from start to finish, and that makes for poor storytelling.

The characters were also rather subdued, by anime standards. A lot of traditional anime characters have larger than life personalities. The more subdued approach of FMA came off as lukewarm.

It’s on Netflix, if you’re interested. But if you have Netflix, then you also have a lot of better alternatives.