I have been told that Terry Gilliam is hard to work with. 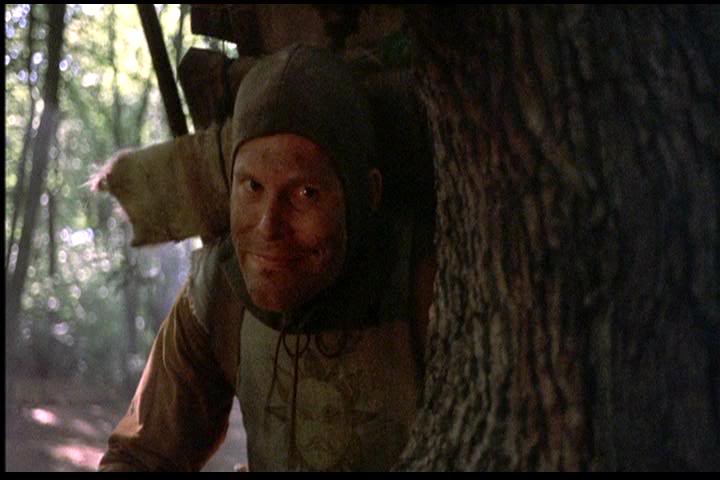 And there is no denying that his films are not easy to make. He is known for putting actors in difficult—even dangerous—situations, all in the service of the story.

And while no one has ever died on any of his sets, or during the actual action of filming, there is one…relatively well known example of an actor meeting his end during one of Mr. Gilliam’s production cycles. You might just have heard about it. 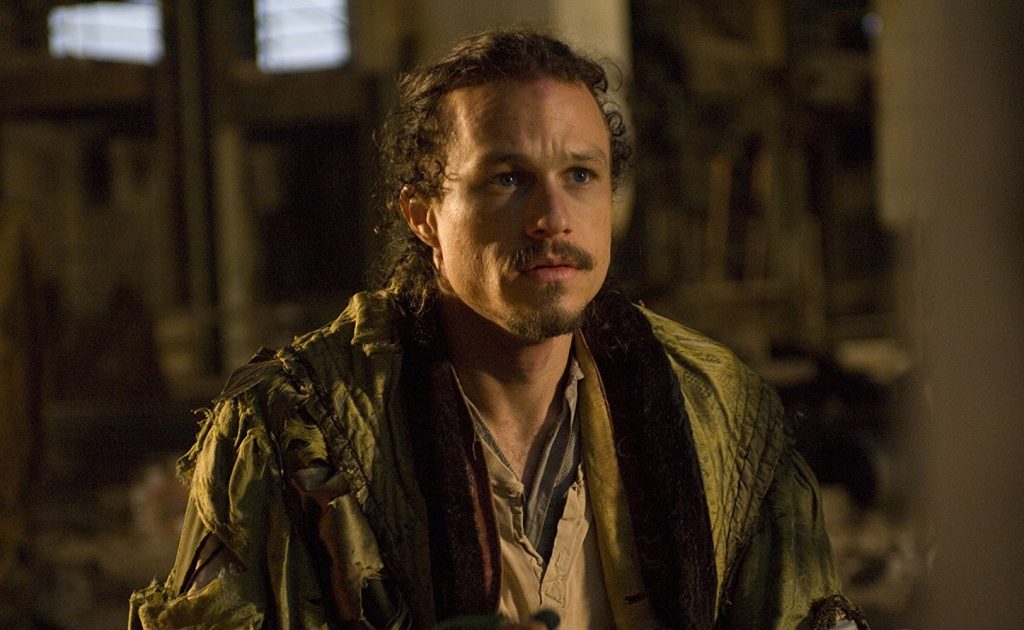 The Imaginarium of Doctor Parnassus was Heath Ledger’s last film. His death, which happened when only one third of the film was shot, nearly sank the movie entirely. That it was still finished and released in any form was a cinematic miracle.

But the tragedy forced the filmmakers to make a number of sweeping changes. Mr. Ledger’s death, though it was not the fault of this movie, undeniably leaves its mark in the film, changing the way it was paced, shot, and written.

This is an elephant in the room, and I can’t proceed without addressing it first. There are many reasons to wish that Heath Ledger were still with us. One of those reasons is that his last film suffers for his absence, and we are left to wonder how much more cohesive the work would have been.

All in all, I am glad that this movie exists, and believe that, ancillary tragedy aside, it was a good move for Mr. Ledger to make. I think he does a good job acting in this film. I think the character is nuanced and interesting. And I thank Mr. Ledger for giving it to us.

I should also thank Johnny Depp, Jude Law, and Colin Farrell, each of whom stands in for the role played by Heath Ledger at various points in the film. That such big name actors would volunteer to stand in, motivated not by profit but by their friendship for a fallen friend, is admirable.

But, as a critic, I still have to examine the material with some attempt at objectivity, and the objective truth is that Imaginarium is a deeply flawed film, and will likely be remembered more for its incidental connection to Mr. Ledger’s death than for any degree of merit within the film itself.

One way for a director to gain prestige is to have a definitive style. You have your Wes Andersons, your Tim Burtons, and, yes, your Terry Gilliams.

I like Mr. Gilliam’s style, in no small part because, like myself, he is a student of iconography and appreciates its power. He strives for it in ways that few modern directors dare to, and he has consistently worked at it ever since his early days as an animator.

However, in his pursuit of new icons, it cannot be denied that he errs on the side of the extreme. It’s a risk that, perhaps, is unavoidable for anyone who wishes to create new icons with any regularity.

I am reminded of a quote:

Only those who will risk going too far can possibly find out how far one can go.

And Terry Gilliam certainly fits that bill. Which means that a lot of his stuff is just too weird to describe. His elevated mind may sit on a different cloud than David Lynch’s, but they’re definitely in the same heaven.

And with that in mind I will say that The Imaginarium of Doctor Parnassus is a weird movie. Less weird, perhaps, than any other Terry Gilliam film, but what enjoyment you can get out of it requires that you be prepared for the surrealism of the fantasy. Some people can’t do that, and those people won’t enjoy what’s on offer. So be sure you know what kind of person you are before you even try. Otherwise, you may find yourself caught off guard by one of the director’s trademark system shocks. 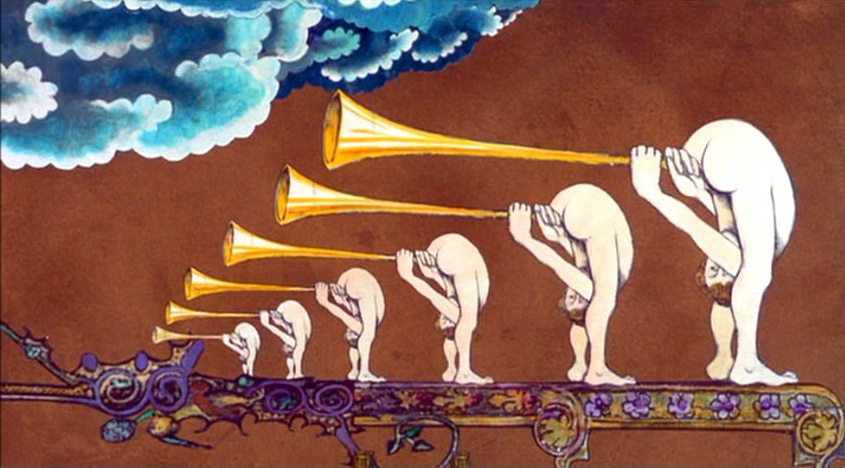 Try looking at this picture without laughing. You can’t.

The Imaginarium of Doctor Parnassus is a traveling show hosted from a horse-drawn wagon that carts its way through the streets of modern-day London. The acts feature costumes, dramatic recitations, and stage magic.

But there’s a catch: the show’s central act, in which audience members enter the show’s magic mirror, is not an illusion. The mirror is a real gateway into the mind of Dr. Parnassus, who builds fantastic worlds out of the imaginations of his visitors and uses those worlds to test their character. While the good doctor attempts to coax each subject into accepting self-transformation and enlightenment, they are likewise challenged by the villainous Mr. Nick, who has equal control over the mirror world. Any visitor who succumbs to the temptations of comfort and ignorance is killed (and presumably sent to hell). 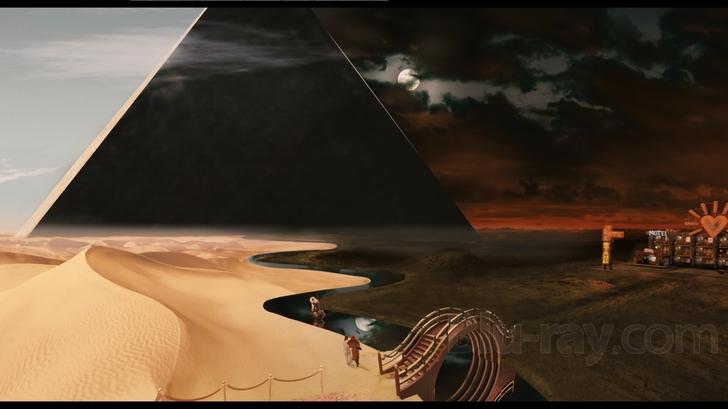 Because, as it turns out, Mr. Nick is actually the devil himself, and Dr. Parnassus is actually an ancient monk who was duped into obtaining immortality from him. After centuries of continual contests between the two men, Dr. Parnassus now owes the devil the soul of his own daughter, which he must relinquish on her sixteenth birthday—a mere three days out from the start of the film.

But in a fantastic twist of fate, the doctor’s theater troupe stumbles upon a man who appears to have been hanged to death, but has managed to keep himself alive by stuffing a brass pipe down his throat. 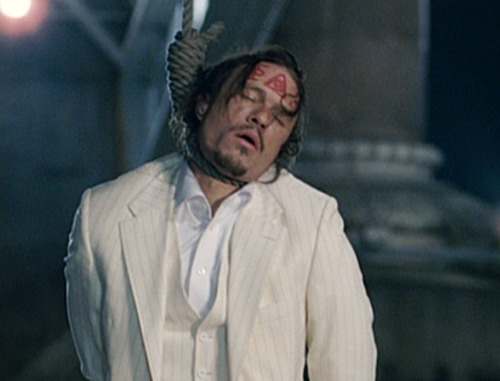 The Good and the Bad

This is a beautiful film to look at. 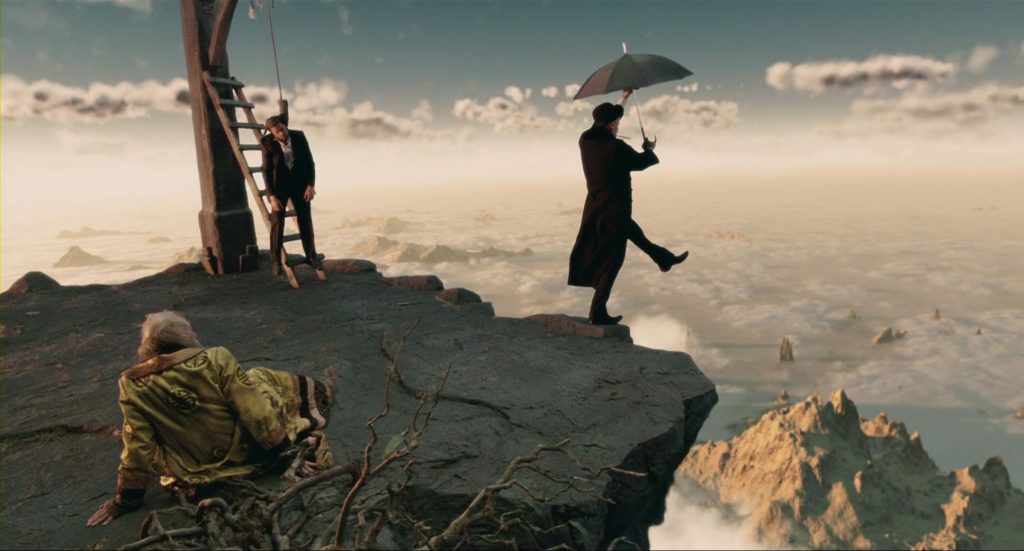 And since looking at movies is the primary way in which we experience them, it can be said that Imaginarium is worth watching for its visual appeal alone.

It must also be said that slogging through the bulk of the film is the price you pay for the climactic scene at the end, where Valentina dances with Mr. Nick and fights very hard to damn herself while the devil tries to stop her. The way this one scene was shot almost justifies the entire rest of the movie. In fact, any scene in which Mr. Nick appears was a highlight of the story, and for all his menace, he had remarkably little screen time.

The other climax, between Dr. Parnassus and Anthony, was clever enough to get a smile from me, as well.

But the build up is just too much, too quickly. The story would have benefited from a gradual ramping of the tension, with the stakes getting ever higher as the tone got darker.

Instead, most of the action is completely undercut. The doctor and the devil battle to see who can be the first to steal five souls, but each team wins four souls all at once, meaning that the only competition that ever really mattered was the last one.

Worse still is Tony’s character arc, which, likely due to the death of the actor, is incredibly broken and stilted. The story makes it clear he is a bad man, but also suggests that the seeds of redemption may be within him. So when, in the final act, he goes completely to the dark side without being offered one final chance for change, left me feeling that a scene was missing (which may have been the case).

And Dr. Parnassus himself is a baffling collection of contradictions. He’s supposedly some kind of enlightened figure who stands in opposition to the devil, offering people roads out of alcoholism, materialism, and other addictions, yet he himself is a drunk and a compulsive gambler. His hypocrisy makes it hard to like him or cheer for whatever victory he is trying to win.

Terry Gilliam’s movies are an acquired taste to begin with. Add to that problem the large and numerous holes in Imaginarium‘s appeal, and you have something that can’t quite get off the ground.

I want to give this film the benefit of the doubt, considering the massive production issue it somehow managed to survive. And yet there’s no ignoring the conclusion that this movie is less than magical.

It’s worth one watch, perhaps. And you can get that watch on Netflix. Still, I wouldn’t put it on anyone’s movie bucket list.