It occurs to me that something can be, at once, both very beautiful and very stupid.

And it also occurs to me that this combination is possible not only in people but also in works of art. Because art is more than just aesthetic, and beauty is not truth (no matter what that Grecian Urn told you).

So it is that I find myself in the unenviable position of having to review a beautiful hot mess, in the form of Mary and the Witch’s Flower.

Mary and the Witch’s Flower is the first feature film to come from Studio Ponoc. 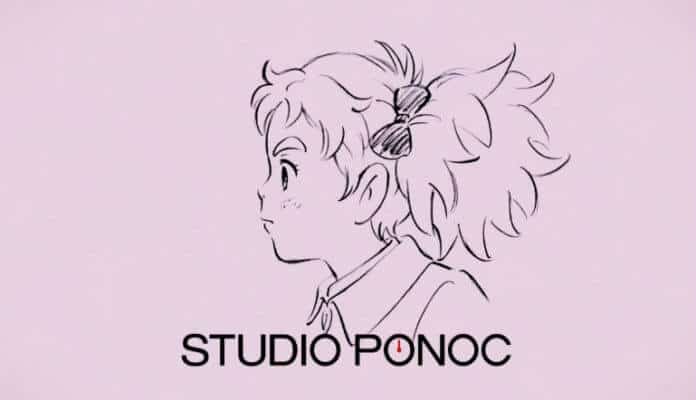 And from all this, it is not hard to deduce that Studio Ponoc is transparently trying to become the next Studio Ghibli, to the point where it seems they are trying to out-Ghibli them altogether.

I have my own feelings about such a brazen approach to branding, naturally. But for the sake of objectivity I have to put those feelings aside and judge their first foray on its own merits.

The only version of this movie that can be found on North American Netflix is the English-dubbed version. The original Japanese language track is not available, and the English dub is, frankly, terrible.

Others might be able to overlook this, but I cannot. No excuse that can be given for the absence of the Japanese dub would satisfy me. There is no technological barrier to having multiple language options, and Netflix hosts enough international content that it should be well prepared to offer those language options.

And this is not an isolated incident. My viewings of April and the Extraordinary World and also Phantom Boy were similarly hampered by such carelessness. This pattern concerns me, and I would not see it continued.

Netflix, you are on probation. 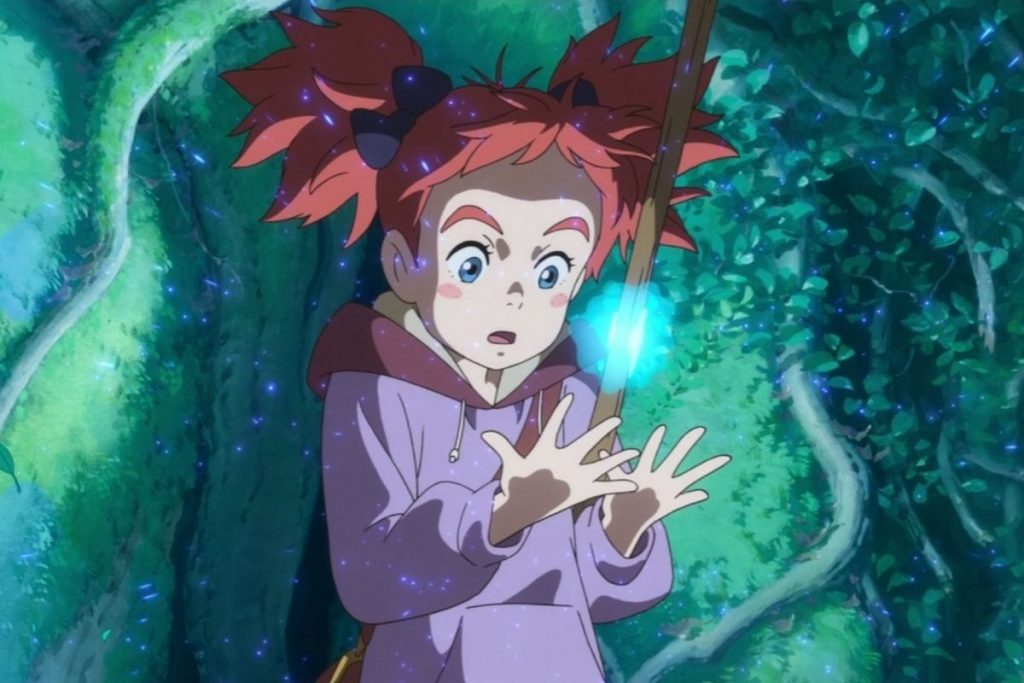 Based on a story by Mary Stewart (author of the Merlin trilogy), Mary and the Witch’s Flower is about a girl who discovers a magical world.

Mary Smith is a clumsy girl who resents the fact that she was born with bright red frizzy hair, who moves in with her great aunt in advance of her parents coming so that she can start the school year at the same time as all the other children.

One day, Mary finds a mysterious wildflower known as a “fly-by-night”. Crushing one of its blossoms between her hands gives her magical abilities for a single night. And no sooner does she try this than she is whisked away to a magical school for witches that floats above the clouds.

The instructors of Endor College are convinced that Mary is some kind of magical prodigy, as she is able to pass all the college’s courses within minutes. When she finally confesses that all her supposed powers actually come from the mysterious flower, the professors become even more interested in her, and kidnap a child from her village as a hostage, forcing Mary to hand over the flower.

But her trials and tribulations don’t end there. With the flower in their possession, the professors begin experimenting with its powers on human test subjects, courting a potential disaster of magical proportions. With only her own wits, and the help of a little broomstick, Mary will have to fight real witches and stop them from doing the unthinkable.

There’s no denying the level of craftsmanship that went into the visuals of this movie. The Studio Ponoc artists, who were headhunted from Studio Ghibli, went the extra mile to make the backgrounds lush and the animation seamless.

The level of detail on display is simply stunning, and manages to surpass even some Ghibli classics such as Howl’s Moving Castle. 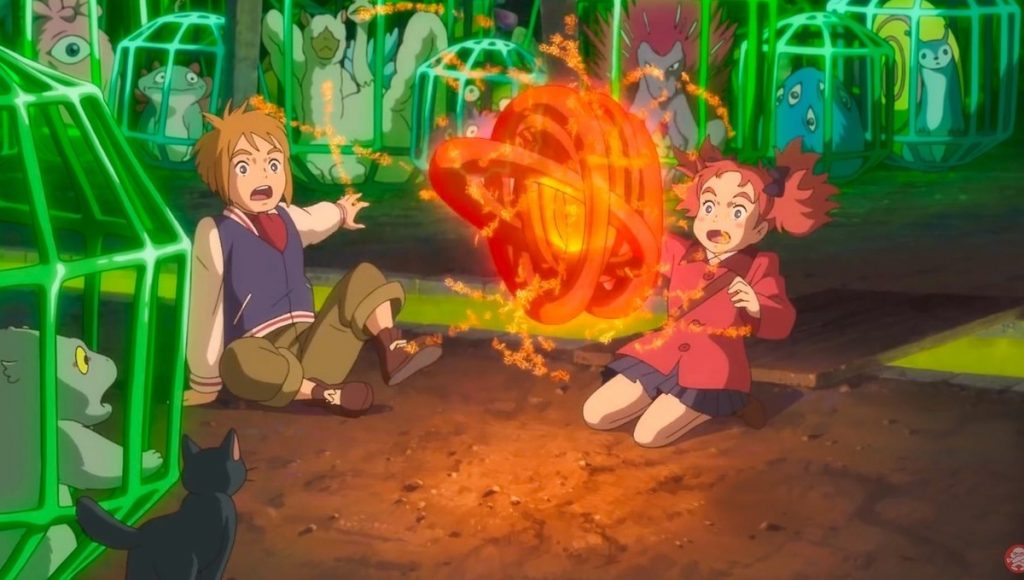 For all its visual resplendence, Mary and the Witch’s Flower fails as a cohesive story. The narrative is undisciplined. It lacks structure.

As an example, the first act fills roughly the first hour, meaning that by the time we’re done being introduced to the main characters and setting, the movie is already half over. What follows after that is a stilted and airless conflict that rushes along entirely too quickly.

The character development is also unnatural and disingenuous. Mary has known the boy Peter for less than a day before he is abducted by witches, yet once she is taken, she acts as if her dearest friend has been stolen from her.

But all of that doesn’t even hold a candle to this little bundle of deus ex machina. 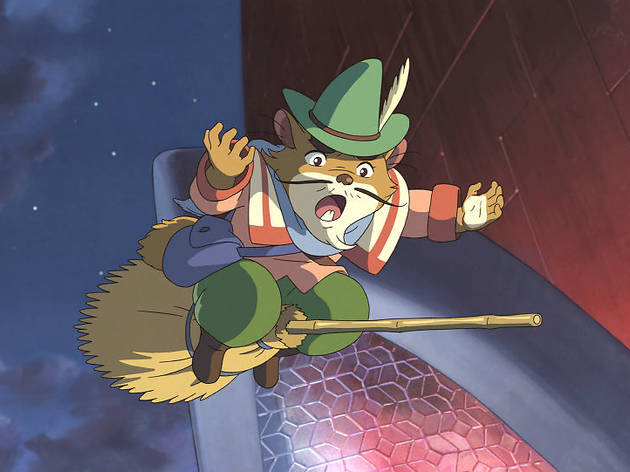 Flanagan the broom master saves Mary from certain peril at least twice during the runtime of this movie, deflating all the tension from the scene. And he’s not the only cheap plot device in the story, either, as it turns out there is a magic spell that can cancel all other magic spells, ensuring that no mess ever gets big enough to be of any real concern to the characters or to the audience.

This film simply commits too many structural sins to be enjoyable as a story. And that’s possibly the worst thing that can be said about any film, leaving Mary and the Witch’s Flower with naught but the visuals to recommend it.

I was actually upset, once upon a time, that I didn’t get to see this movie in the theater. Now, I’m just glad I didn’t pay money for the privilege.

Mary and the Witch’s Flower never rises above the level of a C, and it only gets that far on the strength of its visuals alone. Pretty pictures and flowing animation are not a bad thing to have, but they are also not the point of watching a movie.

It’s impossible not to compare this film with the the films of Studio Ghibli, and while a lot of Ghibli films are also narratively unbalanced, few are so lopsided as to be completely undone (though I have not forgotten the mess that was Tales of Earthsea).

It’s on Netflix, but it’s not a must-see. And if you’d rather watch something else, I won’t stop you.

My Book is Advent 9Netflixing: The IT Cr...