It’s possible that someone reading this is unaware of the Avatar: The Last Airbender revival that is coming to Netflix. 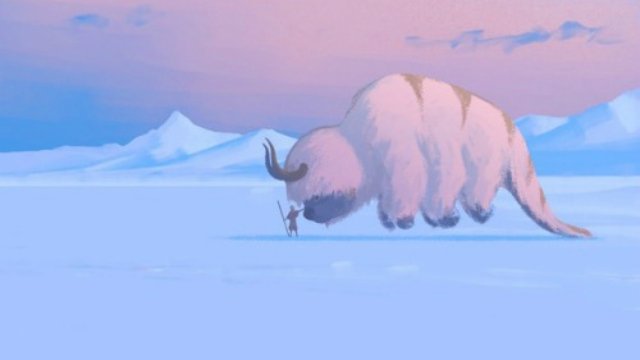 So I might as well mention it here: a new Avatar series is coming to Netflix. Reportedly, it is a live-action series and features Avatar Aang as the main character. Also reportedly, this is not adult Aang or old man Aang, but an Aang that is reminiscent of the one from the original series, meaning that this new series could be a live-action remake of the original cartoon.

Which would be convenient, as a live-action remake would help people forget the odious M. Night Shyamalan trainwreck that everyone wishes had never happened. 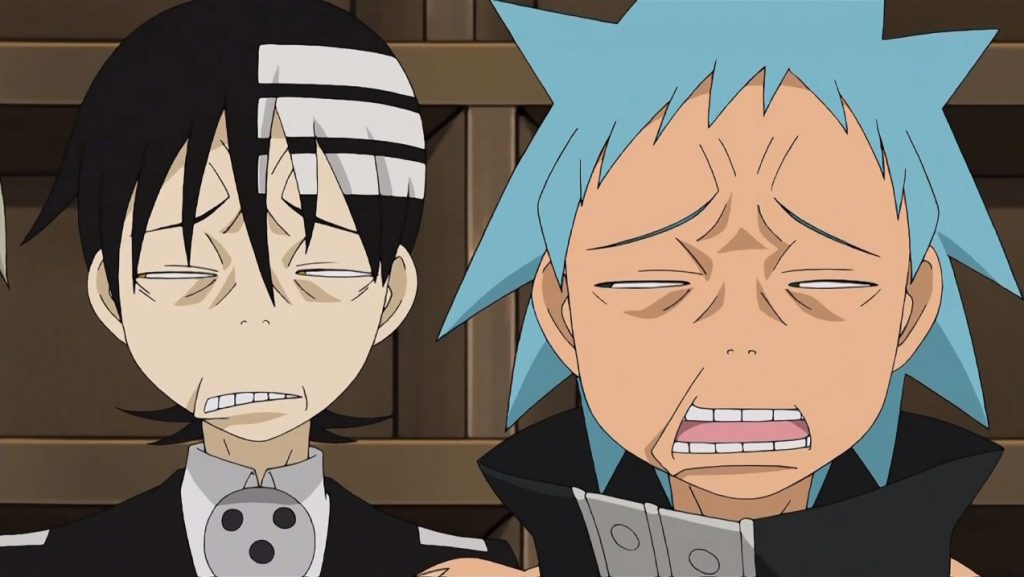 Yeah, you know what I’m talking about.

But perhaps remaking an established show is the wrong tack to begin with. Avatar had a good run, followed by many disappointments. Would it not be better to leave its legacy alone, and instead pour people’s creative efforts into creating something new and wholly unlike what came before. 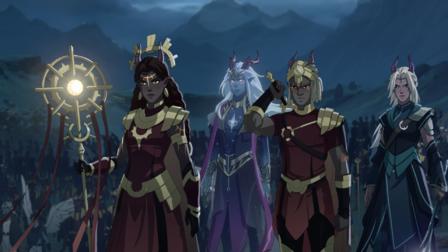 If you remember, you know that Avatar: The Last Airbender famously begins the story with a voiceover explanation about the four elements that constitute the magic system of the show, and an explanation of the history of the story’s world, with a special focus on the “And that’s when everything went wrong” moment.

In a glorious departure from that tired and hackneyed formula, The Dragon Prince begins with a voiceover explanation about the SEVEN elements that constitute the magic system of the show, and an explanation of the history of the story’s world, with a special focus on the “And that’s when everything went wrong” moment.

So once upon a time, peace peace peace, love love love, and boy how wonderful everything was!

But then, one day, badface sourpuss person made big boo boo, and suddenly everyone unhappy.

That’s when big jerkface sticks-up-their-butts people decided to punish everyone because uppity self-righteous overreaction. They made biggest-of-all jerkface enforce punishment by keeping everyone down all the livelong day.

But when people killed biggest-of-all jerkface, that was somehow a tragedy that messed up the whole plan 9 from outer space, leading jerkface sticks-up-their-butts people to want revenge.

And now you know the entire plot of The Dragon Prince.

The Dragon Prince showcases a lot of nuanced and completely original characters. Lets get to know some of them. 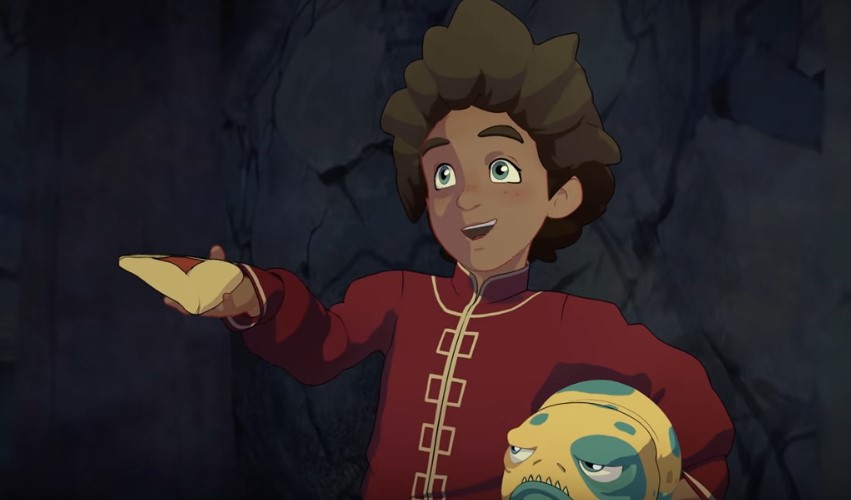 Prince Ezran is the free-sprited and perpetually cheery moral support of the cast. He has a kinship with animals that borders on the magical, and he loves living things of all stripes. 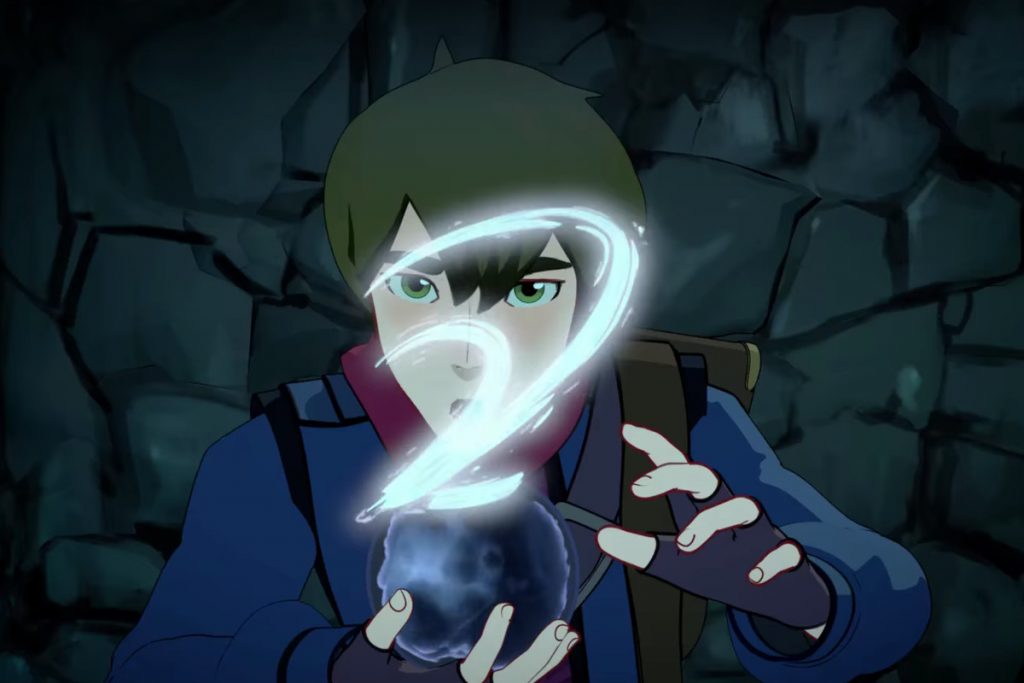 Prince Callum is a fish out of water protagonist who provides comic relief by being bad at princely pursuits like dueling. He’s got a talent for art, though. 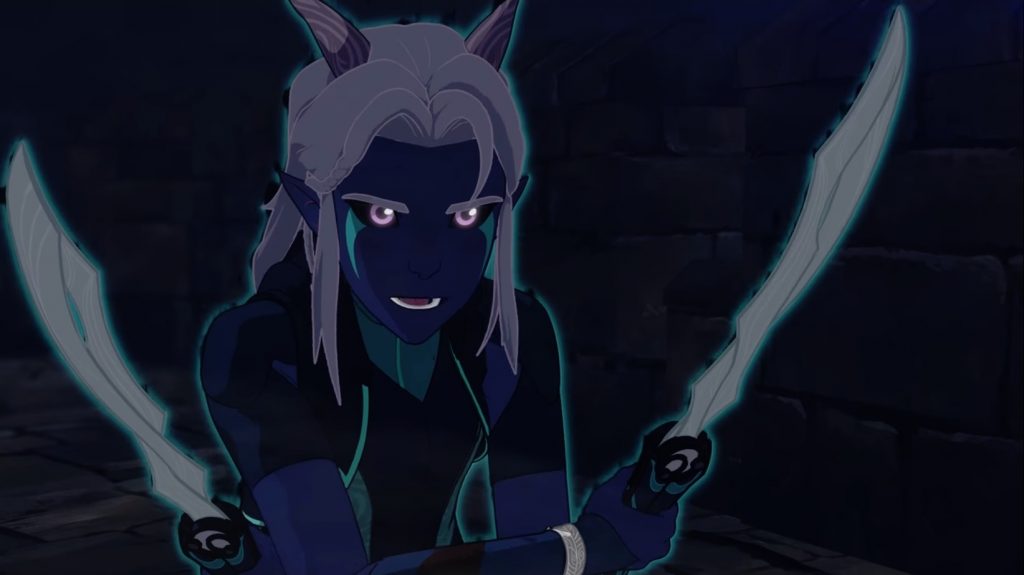 Rayla comes from a tribe of elven assassins. She tries so hard to be the emotionless killing machine that her people expect her to be, but she’s going to drop that facade at the first sign of a plot twist. 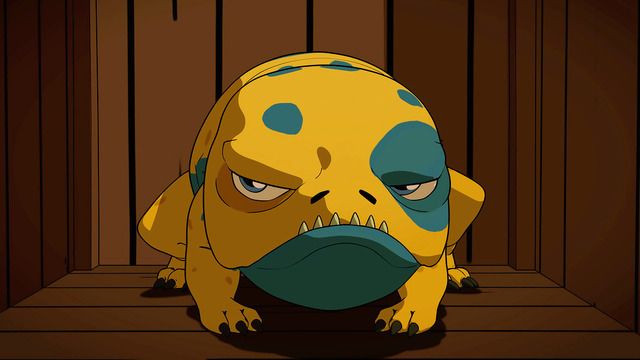 Bait is a glow toad. Everyone acts as though he has an emotional investment in the events of the story, even though he never shows any outward sign that he even knows what is going on.

There are a number of other characters, and not all of them are merely Echo Fighters of people we saw in Avatar. But I’m afraid that no matter how you slice it, we are retreading some familiar territory here.

Throughout my entire viewing of the first season, one thing became painfully clear to me: the frame rate is terrible.

You can’t tell from the still images in this post, but the way the characters are animated is so jerky and stilted that, even after nine episodes, it still grinds at my goodwill.

And I understand why they did it. They wanted to artificially push an anime aesthetic onto the 3D-rendered computer models used for their animation. And yes, hand-drawn anime does use a lower frame rate to great success.

But that does not translate onto computer-animated, wireframe objects and characters. In a 3D environment, it robs the visuals of all sense of motion and makes it look like Netflix’s video compression algorithm is breaking down.

If they really want to keep the choppy frame rate, then they should do what Archer does and flatten the 3D models after rendering. Otherwise, they have no business doing what they’re doing and should increase the frame rate, both in future seasons and (retroactively) in this one.

The Dragon Prince is a palatable fantasy adventure…if a bit derivative.

It has a well developed magic system built on foundational rules that allows for creative conflict and high adventure. Its characters, though not entirely original, are as pleasant and endearing as the sources from which they were carbon copied. And the plot is engaging enough to begin a fantasy epic not unlike what we got from Avatar, if maybe a little less personal and childhood-defining.

I see it much as I see the first season of Disenchantment: it is a series with a huge potential. Although in the case of The Dragon Prince, the first season can stand on its own as an entertaining story.

I’m not sure why the showrunners felt a particular need to make this show, as we are getting another Avatar series on Netflix that will no doubt demand the full attention and effort of the same people who made Dragon Prince. But I suppose we must wait for this series to distinguish itself and present its own reason for existing in due time.

The first season is on Netflix right now, and I highly recommend it. But, much like its characters’ own journey, this show has a long way to travel before it can truly arrive.