For better or for worse, stories tend to fall into a set of familiar templates. And this is especially true with movies, as they tend to stay faithful to the various Hollywood formulae.

And when Hollywood does a drag story—where a character dresses up as a member of the opposite sex—it usually falls into one of two categories.

1. It Gets Played Up for Laughs 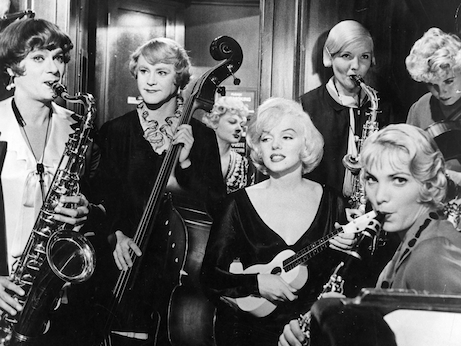 This goes back to Billy Wilder’s Some Like it Hot, or, even earlier, in Bugs Bunny cartoons. In this situation, the character dresses in drag as a means of deceiving another character, to comic effect. They also get a taste of how the other side lives, also to comic effect.

There’s lots of crossing societal lines and violating taboos to create social tension, and that tension gets released through various gags and jokes about the absurdity of the situation. About once a decade, it gets repackaged, through Tootsie and Mrs. Doubtfire and even Portlandia. It’s one of those perennial storylines that we’ll probably see again and again until the end of time.

2. It Becomes a Statement 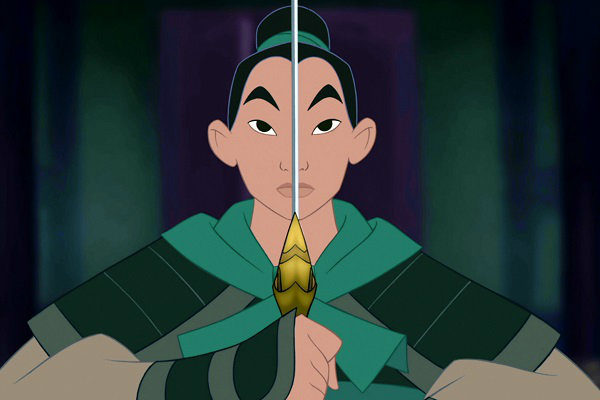 Some movies are more interested in touching the topic of gender and society, and use the “drag as deception” plot to explore themes of identity and social norms.

Such stories are out to make a statement, though that statement is not necessarily a declaration of what is right or wrong in the world. Often, it simply wishes to give affirmation to people who can’t always follow the path that society lays for them.

But the film I am reviewing today doesn’t fall into either of the above categories. And that may have something to do with the fact that this is not a Hollywood-produced movie. Instead, it comes from the same people that gave us The Secret of Kells and Song of the Sea. You’ve probably heard of it, though it didn’t get a wide release in the US.

This is The Breadwinner. 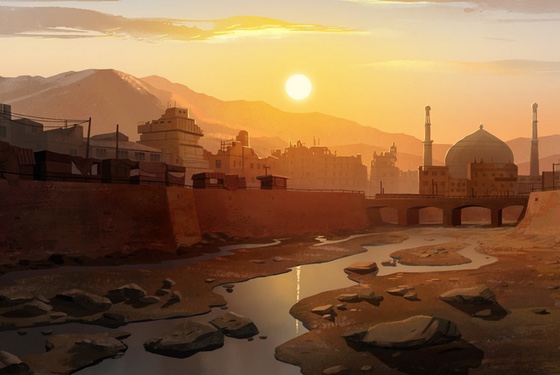 The Breadwinner can, in some ways, be seen as a followup to The Secret of Kells and Song of the Sea. But it departs from those previous films in stark ways.

The color palette here is limited. Kabul, Afghanistan is a place of yellows, whites, and browns. The crumbling scenery is painted in exquisite detail, but it can’t be said that any of the locales are depicted as attractive. This is a harsh backdrop, made to look as hot and dry as possible.

There are also no fantastic elements found within The Breadwinner. The story is realistic, with inspiration taken from the real war in Afghanistan. The only fantasy we get is a story the main character tells herself that serves as a parallel commentary to the events of the main story.

A Tale of Survival 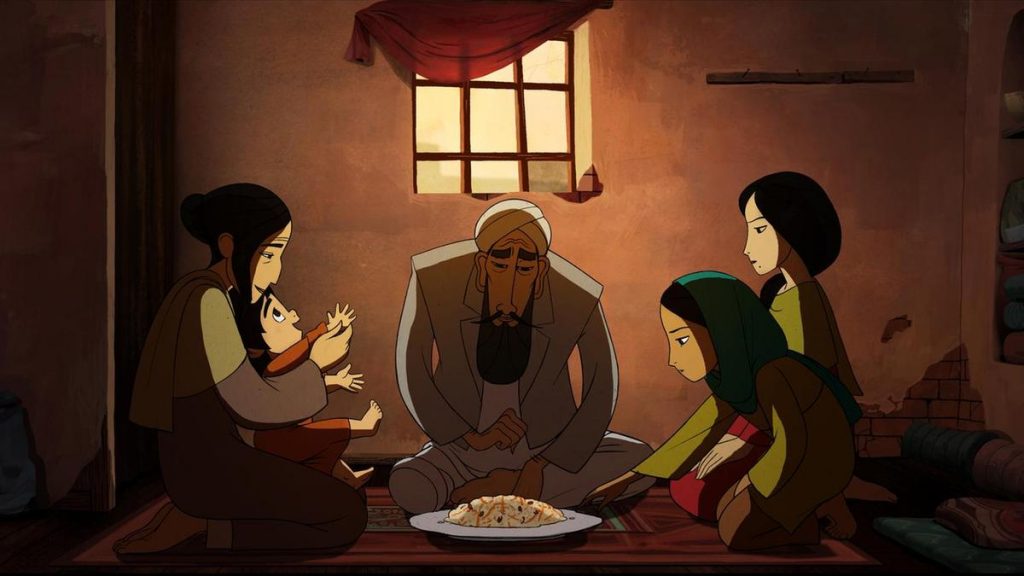 The story centers around 11-year-old Parvana, whose father, a teacher, is arrested by the Taliban under charges of spreading dangerous ideas. Legally, none of the remaining family members can leave the house, as the eldest brother Sulayman was killed some time before the start of the film, and the only other brother is just a baby.

After an early attempt to leave the house results in a severe beating, Parvana’s mother is unable to provide for the family, so Parvana takes matters into her own hands. Cutting her hair and borrowing her dead brother’s clothes, she assumes the guise of a boy in order to work in the city and bring home food to her family.

She takes a number of odd jobs, and is particularly useful as a scribe. And through her own ingenuity and with a little help from another crossdressing girl pulling the same trick, she manages to keep her family from starvation.

But nobody believes it can go on forever. If she is to secure her family’s future, she has to get her father out of prison. And while earning money for food, she begins to stash away what she hopes will become a big enough bribe to get through the prison gates.

Getting at a Different Theme 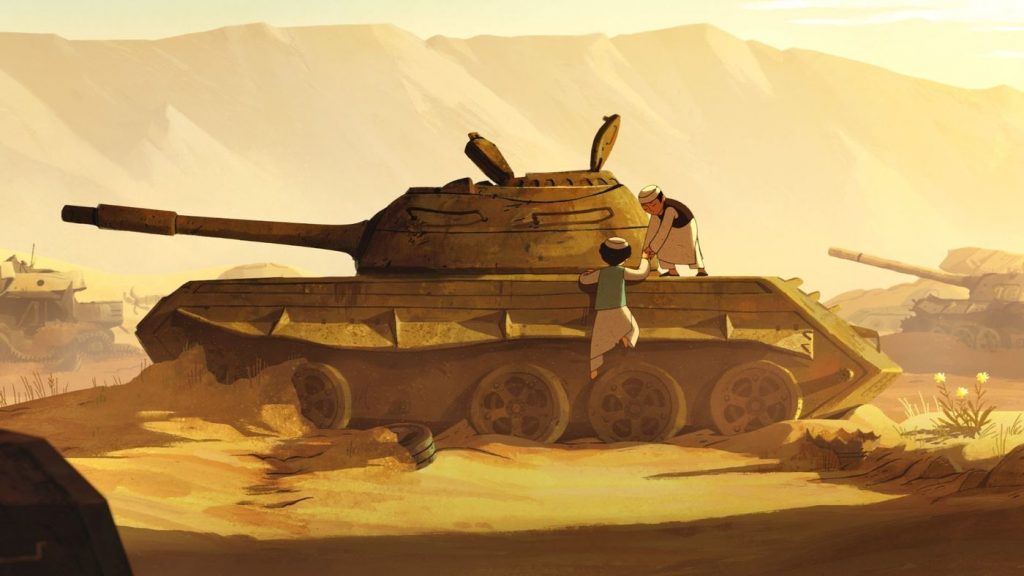 The Breadwinner does not use its story either to play up laughs or to make a statement concerning sexual roles in society.

Of course, Parvana’s gambit is a learning experience for the character. She does find that people treat her differently when they assume she is a boy. Yet that is not the film’s central theme or lesson. It is incidental to a greater story about family and heritage.

The opening conversation between Parvana and her father is an examination of the Afghan people’s long struggle for survival. And as each of the family members ultimately makes a choice to survive, against all odds, this becomes the centerpiece of the story. Whether prison, or a corrupt government, or an approaching war threatens them, this family is determined to see the other end of it.

Ultimately, the statement being made is that people have to survive, using whatever tools come to hand, even if that means breaking a few rules.

If The Breadwinner had been an American-produced, live-action film, it would have won an Oscar.

Maybe not best picture. But a best director or best actress nod would have been in there somewhere. But since Best Animated Feature can only go to films made by Disney or Pixar, and foreign films are at a disadvantage across the board, The Breadwinner was doomed to go home without a little gold man, regardless of how tailor-made it was for an Oscar.

One other disadvantage (and this is SPOILER, so proceed with caution) is that nobody dies in this movie.

I kept waiting for someone to, but they never did. And I don’t believe I’ve ever seen a somber war movie skimp on a main character death. Sulayman is dead at the beginning of the story, so he doesn’t count. And a few prisoners get executed off screen, but those are nameless extras.

So let that be a lesson to you: killing characters is the only way to win awards.

I did not enjoy The Breadwinner as much as The Secret of Kells or Song of the Sea.

Don’t get me wrong, it’s an astoundingly animated movie. But the story is just so dreary, and even at its most triumphant it still comes across as hopeless. And while SoK and SotS both had their melancholy moments, The Breadwinner is steeped in somberness with no concrete resolution. I do wonder if it should have been a live-action film, as both SoK and SotS used the medium of animation to deliver a sense of otherworldliness, which is hard to achieve in a film that is so concerned with real-world events.

Still, it’s better than most of the animated offerings on Netflix and definitely worth a watch. To anyone wanting to watch a serious story gorgeously rendered, I can’t recommend it enough.