Netflix truly has given us some new and innovative entertainment options, including a host of anime offerings, foreign films, original shows, and, most importantly, video game adaptations that don’t suck.

Seriously, that is the biggest surprise of all.

The Little Show that Could

One year ago, the first season of Castlevania came out of left field. The show was not without issues (which I gave a proper harping in my review of that season), but quickly established itself as the best screen adaptation of a video game ever.

Sorry, Rampage, but you’ve been outclassed.

With stunning animation, well written characters, top-notch fight choreography, and an outstanding voice cast, the show had everything going for it…except length.

Because the show’s first season was only four episodes long. And those episodes were barely longer than twenty minutes each. It honestly wasn’t enough runtime for these characters to go on a real adventure, and so the first season felt more like a prologue than anything else.

But that only made us more excited to dive into season 2. And as soon as it landed I began binge watching.

Here’s what I found. 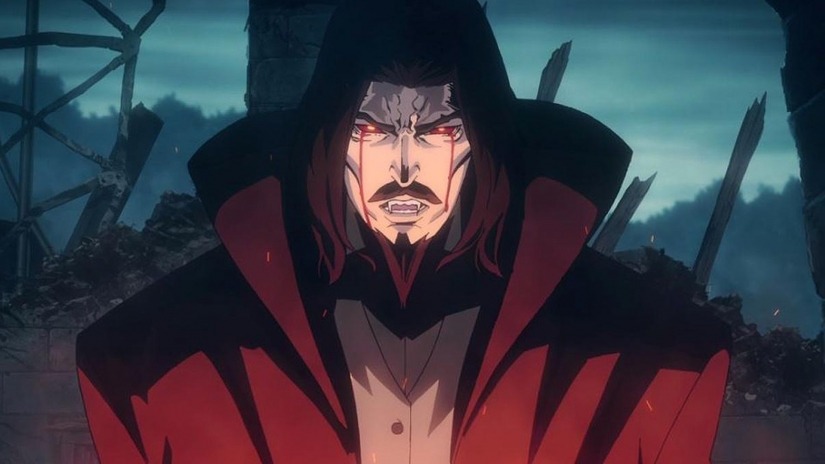 The series begins with a flashback to the day when Lisa (a doctor trained by Count Dracula and coincidentally married to him) is arrested by the Catholic church on charges of witchcraft.

And let me tell you, this one scene made me stop feeling sorry for her, because she makes every possible mistake you could make when someone accuses you of heresy. She claims her medicines are based on ancient esoteric knowledge. She denies the existence of the devil. She keeps committing faux pas left and right. And though the bishop who is arresting her is a single-minded, prejudiced, bloodthirsty prick, she’s apparently too stupid to realize that. So she tries to reason with him, and it turns out just as well as you would expect.

I’m not saying any of this was her fault. I’m just saying that in season 1 she was advertised as a genius who was ahead of her time and in season 2 she’s basically living out a Three Stooges routine.

Cutting to the present day, we discover Count Dracula raising an army of vampires and monsters so that he can wipe humanity off the face of the Earth.

If you remember my review of season 1, you’ll also remember that the two biggest hangups I had with that season were the levels of ultraviolence (which crossed the line from shocking to outright hilarious) and the excessive swearing (because it stops being realistic dialogue if people say the f-word ten times in a single sentence).

And apparently Dracula himself read my review, because his first point of business in bringing about the apocalypse is that he only wants the humans to die, not to suffer. So dancing around in babies’ blood is off limits for his vampire hordes. 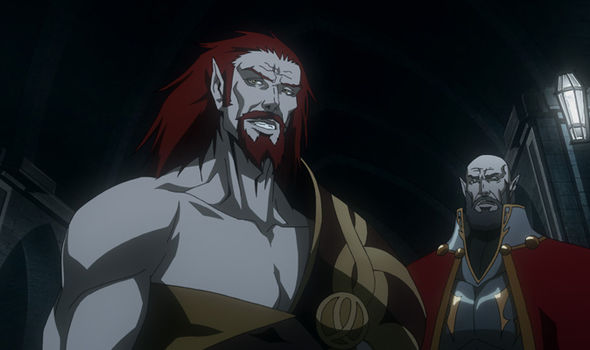 This upsets a few of his vampire followers, who particularly like dancing around in babies’ blood, and who feel that a group of consenting adults should have the freedom to dance around in babies’ blood and accept the risks associated with it without the vampire government interfering in their personal lives.

In particular, Dracula finds himself butting heads with Carmilla. 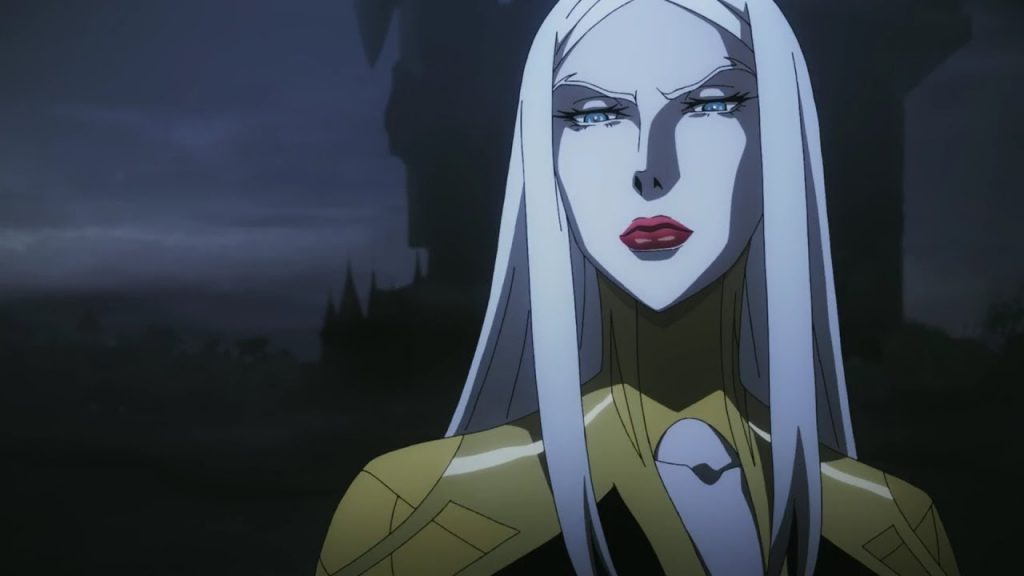 A minor vampire aristocrat who disapproves of Dracula’s marriage to a human and who has designs to seize power from him, Carmilla quickly sets about sowing intrigue in Dracula’s inner circle.

Meanwhile, the trio of heroes from season 1 sets out on their quest to hunt down the good count and put an end to his reign of terror. 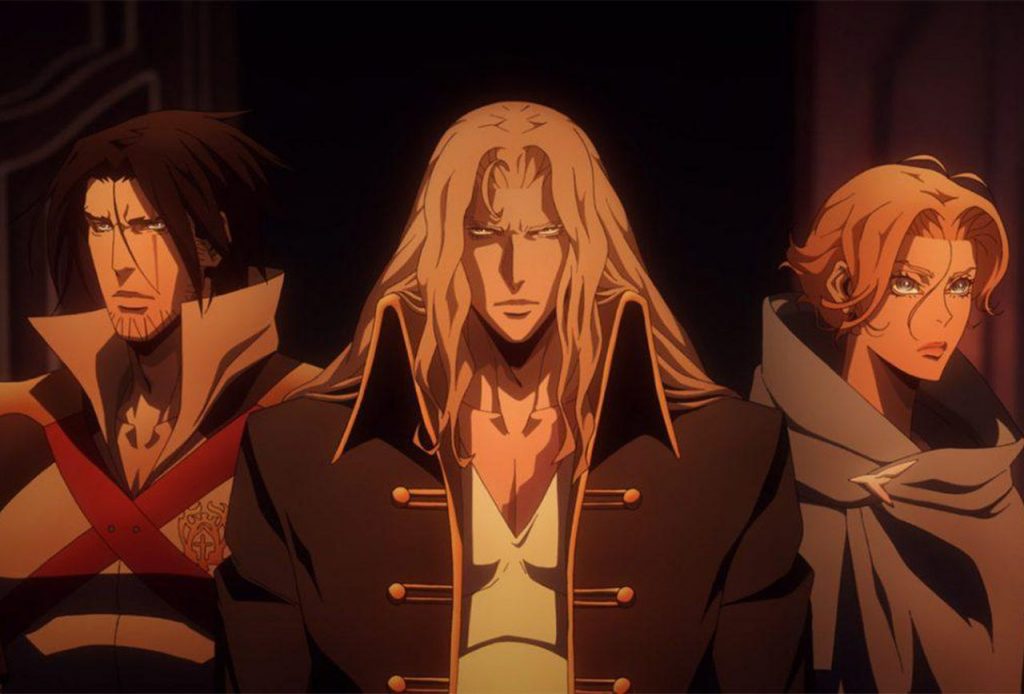 Trevor Belmont, Sypha the Speaker, and Alucard aren’t necessarily the best of friends. Each has doubts about the others’ qualifications to be part of such a dangerous and important quest.

And that quest may be doomed, anyway, since it would require them to go to Dracula’s castle, and it’s just about impossible to storm a castle that can teleport away the moment you get close to it.

This prompts Trevor to recommend that they seek out the hidden Belmont trove: a cache of high-powered vampire-fighting weapons and a bottomless library of books about how to kill Dracula. Their role in this season is mostly reduced to reading books. Until the last two episodes. 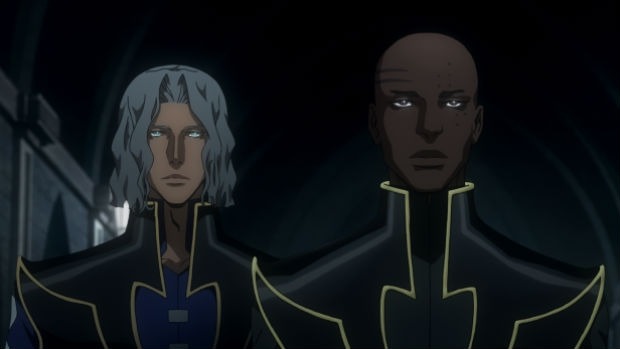 Season 2 took the show in a new direction.

The first season was action packed. And though it had some solid moments of character development, there was hardly any room to breathe between all the mayhem and horror.

The new season is the opposite: giving us nonstop character development from start to finish. Some viewers may feel cheated by the change of pace, and I have to admit that I was caught off guard, too.

But if you must replace action with character development, it helps that these particular characters are some of the best on television. The slow moments are some really good slow moments. And while the decision to turn a rapid-fire action show into a tale of high drama is a bit perplexing, at least it is high drama.

My only particular concern lies with Dracula himself. He spends a lot of this season brooding and being moody—in a way that beautifully establishes his character, yes, but it does not jive with the way he is depicted in the Castlevania game franchise…or most other depictions of the character

Dracula is supposed to be a monster. Showing us his vulnerable side gives him depth, sure, but it also undermines his ability to intimidate. Dracula—and especially the Castlevania Dracula—should be grade-A final boss material. He should eventually go into his beast form and start breaking skulls before he’s finally done in.

But all together, the show’s evolution lends it to greater prestige (and hopefully a few Emmy nods), and I am pleased with the final product. 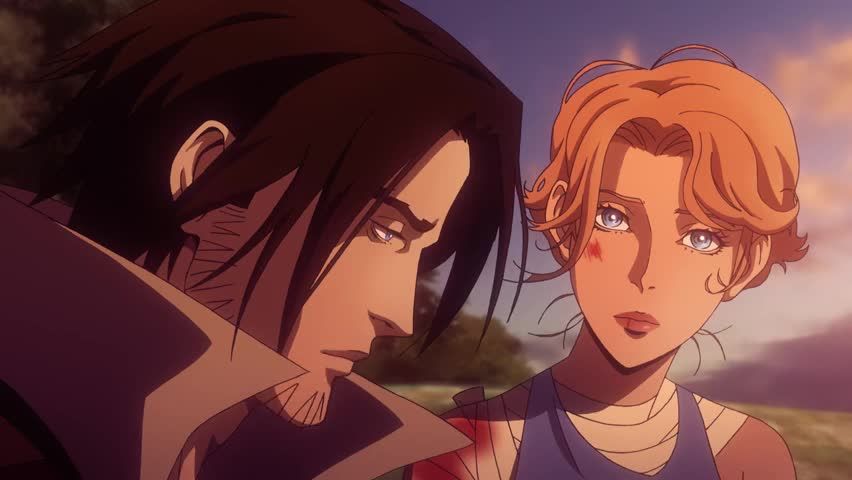 Castevania, season 2 is an improvement in almost every way over the previous season.

The animation is smoother and richer, there are more references to the game franchise, the plot is thicker, and we are treated to a bevy of new characters and side stories that enrich the mythos as a whole.

That the bulk of the season was dedicated to Dracula’s quarreling hordes, with the heroic trio consigned to the background, was an unexpected outcome, but not unwelcome. As with lots of stories, the villains are naturally more interesting than the heroes, and focusing on their problems gave the show a joyous tension that made it highly watchable.

It’s still not a good fit for children, or even most teenagers. But on the whole, the show is a must watch, and one of Netflix’s best offerings.