Once again, Dr. John Horne joins us on Mr. Horne’s Book of Secrets. He has a PhD in marine biology and writes in a variety of genres.

Right now I’m reading The Birth of Tragedy by Friedrich Nitzsche. I’m not finished yet but I’m so excited about what I’ve read that I feel the need to broadcast it.

The whole book is a philosophical perspective on art. It’s not exactly light reading but the language is so elegant and almost every page turned on some sort of light bulb for me. All kinds of synapses in my brain started to writhe and braid together, forming new creative pathways. Needless to say, for anybody who stomachs heavy philosophy I give it my full endorsement (perhaps not too heavy).

I’m putting my thoughts on this blog because the implications for creative writing and storytelling are huge. After reading Nitzsche I am seeing the popular literature of the 21st century in a whole new light. Questions I had about what makes a story successful and speak to readers now seem much clearer.

To kick off, lets start with a painting by Rafael: The Transfiguration of Jesus Christ. According to Nitzsche, this painting is a flawless example of the highest form of art.

At the bottom of the paining we see the world, dark, gloomy, confused. In the bottom right corner there is a boy stricken with an evil spirit, and the nine apostles at the foot of the mount cannot cast it out; they don’t know why not.

In the middle of the painting we have Peter, James, and John in rapt vision of the transfiguration of Christ, who appears at the top of the painting in his glory, flanked by the angelic Moses and Elijah.

In this painting is blended the supreme and the mundane, the holy and the carnal, the eternal and the temporal. Apollo was a complex god. He was reputed to be beautiful and luminous. He represents the perfection of a being. He is a god of knowledge and self-control.

Finally, Apollo was a god of art… but a particular kind of art, which Nitzsche calls either Apollonian or Doric. The art of Apollo stems from dreams and religious like visions. Poetry was within Apollo’s artistic realm and Nitzsche explains that the job of the poet is to communicate dreams.

Doric music was calm, quiet, and played on a mild instrument such as the cithara.

Nitzsche calls Homer an Apollonian artist, because of his focus on gods and destiny and so forth. There are many modern equivalents of Homer in today’s literature—people writing about immortals and magic and things that belong to the sphere of dreams. In short, fantasy… and magical realism,

But Nitzsche argues that Apollonian art by itself is incomplete.

Think back to the painting by Rafael. Bisect it horizontally through the middle and just take the top half. What do you have? It’s still a nice painting, and it is the most sublime part of that painting. But now it is missing something. It is diminished because it lacks contrast.

Dionysus is the antithesis of Apollo. Rather than dreams, his sensibilities are best described as intoxications.

But more importantly he is a god of nature and of the real world. Dionysus is a realist, a barbarian—uncivilized and lacking culture.

From the Dionysian perspective, the world is not a nice place (again, I emphasize that he is a realist), it is dark, and sad, and depressing. And thus, the Dionysian way of dealing with the real world is to give it the finger, then drink and party yourself into oblivion.

To be honest, we all like Dionysus. We do. We love that guy. He gives us an excuse to delve into our most natural and carnal desires. He is an emancipator.

The downside: Dionysus will destroy you. And the revelry he inspires will only bring more sadness to the world.

But like Apollo, Dionysus has his own brand of art—natural and animalistic. Dionysian music is loud, raucous and is meant to numb your mind like so many chalices of crimson wine.

If you need modern examples of Dionysian art, open your eyes, they are all around you. Anything that glorifies sex and/or violence and is a painkiller for your mundane existence is Dionysian.

Also things that make you sad, or afraid, or titillated are Dionysian. These are emotions that you can get drunk on.

Love and infatuation can be intoxicating too, but it isn’t Dionysian unless it is temporary. True love, immortal love, is Apollonian. When love crashes and burns, that is Dionysian. Relationship drama is Dionysian… the kind that all women (and me too) tend to love.

As human beings we crave the Dionysian as much as we crave the Apollonian. We have a natural urge for it. But we know that we must only drink from his cup sparingly, lest it bring us misery.

True art reconciles the Apollonian and the Dionysian

And now I ask: is it too much to ask for both? Can we have both Apollo and Dionysus?

It was Nitzsche’s belief that the great accomplishment of Greek art was the unification of the Apollonian and the Dionysian. How did they do it? They invented Tragedy as an art form.

Tragedy, Nitzsche says, is the only thing able to satisfy the urges of both the Apollonian and the Dionysian.

Tragedy contains all the cruel reality of the world, but is redeemed by higher purpose and experience.

Tragedy is Apollo, but with humanity.

Tragedy is Dionysus, but with a conscience.

Tragedy is Apollo, with flaws that we can relate to.

Tragedy is Dionysus, who feels guilt for his sins.

Dionysus and Apollo may not like each other, they may repel each other, but if they were to have a child together that child would be tragedy. And what a beautiful child she is.

As artists, as writers, we can try and emulate the Apollonian, or the Dionysian. But what we should be trying to do is bring them together.

In fact, I might argue that all art takes forces that are dynamically opposed and finds ways to marry them together in a way that is perfectly harmonious. And the more incompatible the ideas, the more beautiful their marriage will be… if you can pull it off. 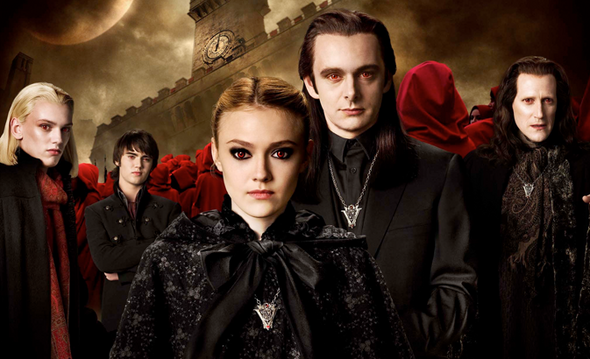 Vampires have been done to death in literature, but perhaps there is a good reason for that.

Can you think of a better mixture of the Apollonian and Dionysian than the modern concept of vampires?

On the one hand, they are flawlessly beautiful and god-like—Apollo. And yet they are given to certain demonic indulgences—Dionysus.

In the Twilight novels, Bella wants Edward to turn her into a vampire. But he won’t do it, saying that it would be a “tragedy.” Stephanie Meyer probably doesn’t realize it. But with that one word she hit a bullseye that she wasn’t even aiming at.

Concurrently with The Birth of Tragedy, I am reading the novel American Gods, by Niel Gaiman. And I must say, it is really well done. I would even go as far to say that it is fantastic. So expertly composed, in fact, that I don’t think I’ll finish it.

I find it disturbing, because it is so realistic. It’s about gods and the Apollonian, but it is so Dionysian that my mind has a hard time separating the book from reality. I find myself thinking, yes, this is true, this is how the world really is… or how it would be if all those pagan deities were real. And it is not pretty.

There, I said it.

Don’t judge me. I take my fiction very seriously.

But I bring up the book because it is a workshop on how to blend the Apollonian and the Dionysian together.

We are all dualistic creatures. We are all living, breathing, walking contradictions, having both Apollonian and Dionysian (to use the language of Nitzsche) tendencies inside of us.

We are tragedy incarnate.

We are, simultaneously, both animal and something more.

We are realists, living in a real world. But at night, when we sleep, we dream and that is as much a part of our human identity as anything else. In dreams we interface with things that we cannot see when we are awake.

Nitzsche recognizes this. He says that we are the stuff of our illusions… both waking and dreaming. And while I do not share Nitzsche’s belief system, I find his reasoning compatible with what I know to be true.

To write compelling stories we need to satisfy both sides of our dualistic nature. We need the dreams and the intoxication. We need to put the sublime and the mundane into one piece, the way Rafael did.

I feel like I’ve always known this on some level. But now I understand it much better.

2 thoughts on “The Birth of Tragedy”