Which of course doesn’t mean that I am a literal fish, but it’s something to keep in mind for today’s post, for today I will be talking about a mold-breaking book series—one that takes subversion of the reader’s expectations to new extremes, and has set a new standard for the practice.

It’s funny, it’s brilliant, it’s something you should be reading already. You may want to start before you reach the end of this post. I’m not joking. It’s that important.

What book series could possibly be worth all the hype I am making? Why, none other than Alcatraz vs. the Evil Librarians. 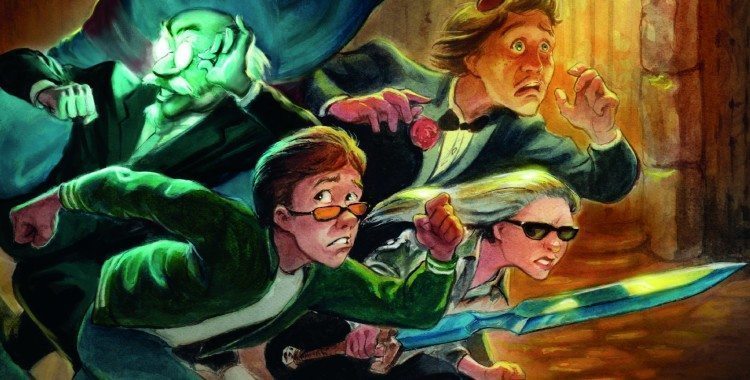 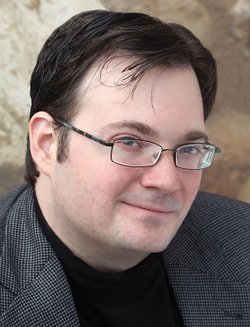 When Brandon Sanderson was in the middle of writing the Mistborn series, which would go on to become widely acclaimed, he decided that he needed to take a break.

A writer’s brain is often a messy place, and staying too long in a single fictional world causes a lot of baggage and other rubbish to start piling up from floor to ceiling. So it is often a good idea to step away from a universe that one has gotten too familiar with. Though, on the other hand, it is often a bad idea to do no writing at all for an extended period.

The happy compromise between these two positions is to take a vacation from one universe and set up shop in another. And this is what Mr. Sanderson decided to do. He had spent a great deal of time building up a serious and epic fantasy universe, and now he was ready to do something closer to the opposite end of the spectrum. He let his pent-up zaniness loose, and penned a Middle Grade fantasy novel set in a world as fantastic as it was loony. That is how we got the first book in the series, aptly titled Alcatraz vs. the Evil Librarians. 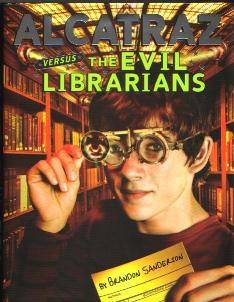 The book was an undersold gem, but enough people appreciated it for it to merit a sequel. Either that, or the publisher had a hard time saying “no” to Brandon Sanderson. I don’t think I can authoritatively say which.

But trouble was on the horizon, for the editor who originally acquired the series ended up leaving the publishing house. This was not Mr. Sanderson’s traditional publisher, TOR books. He had decided that he didn’t want to put all his eggs in one basket and decided to go with a different publisher for his Middle Grade books than for his YA and Adult books.

This turned out to be a bad idea in the long run. Alcatraz‘s publisher was not willing to give the series all the marketing and other efforts it needed and deserved, despite Mr. Sanderson’s mushrooming reputation. After a half-hearted effort to promote the fourth book fell flat, the publisher was no longer interested in any of the books.

This came as a disappointment to fans of the series, as well as to the author himself. Mr. Sanderson had promised five books (and privately admitted that there would be even more than that). But publishing rights being what they are, it would be a few more years before any amends could be made.

The first book had been optioned by Dreamworks Animation for a while, but that had not lasted. Which is a shame, because a big screen adaptation would have forced the original publisher to take the series more seriously.

Eventually, the publishing rights were reacquired by the author (I’m not sure about the details, but I think he may have somehow leveraged the rights back into his arena before the reversion date, or maybe the rights reverted on their own. These things happen behind closed doors.).

And that’s how we got the new editions of the first four Alcatraz books. 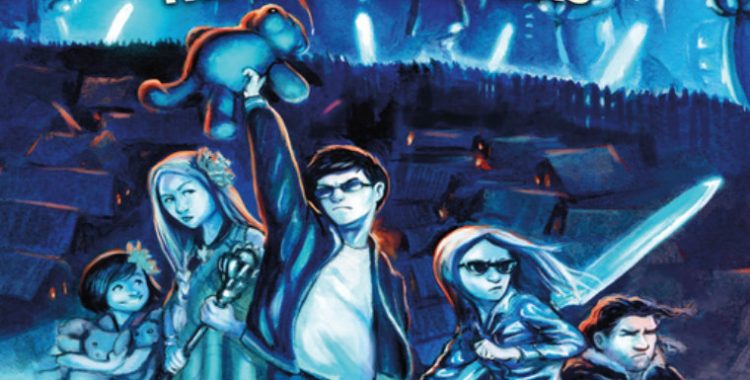 I will always have a nostalgic connection to the original covers, but I have to admit that the new cover art blows them out of the water.

Happy days were here again, and better than ever before, for in addition to the reprints of the first four books, fans were finally treated to the long awaited fifth book in the series: Alcatraz vs. the Evil Librarians: The Dark Talent. 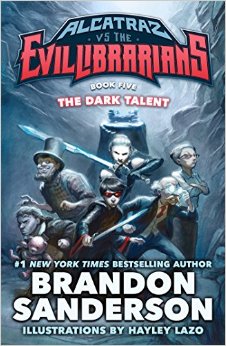 The new illustrations in all the books, created by Hayley Lazo (who had come to Mr. Sanderson’s attention through her DeviantArt account, of all things) gave them a level of polish that they had not had before, and it seemed like the series was finally getting the recognition it deserved.

But there was a secret waiting in the newest book, and it was so momentous that it not only shined new light on the series, but changed the reader’s perception of everything that had come before.

Only after finishing The Dark Talent can one understand what kind of books he has been reading. And it’s heartrending to watch it unfold, but brilliant in its execution. It’s an Empire Strikes Back moment that is somehow more profound than The Empire Strikes Back. I don’t think I will ever forget what it felt like.

The Story of Alcatraz and Co. 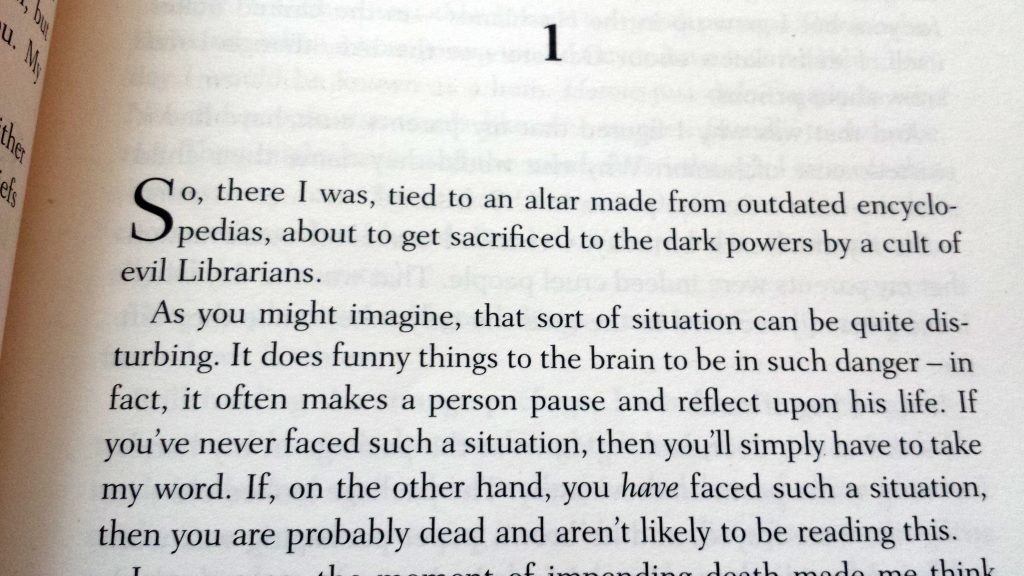 The first book ostensibly begins with the title character—a boy named Alcatraz Smedry—about to be the victim of human sacrifice. The story that follows is one long flashback about all the events that led up to this grisly fate.

It begins with his foster-care childhood, how he was always a problem child and a misfit, until one day his biological family shows up, and they take him away from his mundane life to one where he can use magic and is a celebrity and goes on all sorts of wacky adventures with a crazy cast of characters. And it’s funny. It’s genuinely funny.

Except that Alcatraz, the narrator, insists that it’s not.

He tells the reader, in plain language, that he is a coward and not the hero that everyone thinks he is. He repeats this often, even while he fights off monsters, wraiths, dinosaurs, and magically overpowered enemies. He always manages to get out of every scrape with courage, luck, and his wits. It seems like typical (but excellent) fantasy adventure fare.

Yet Alcatraz insists that it’s anything but.

A lot of tropes are subverted. A few jabs are made at Harry Potter, as well as other fantasy stories for children. Alcatraz is not like those other heroes. His powers are zany: he can involuntarily break things with his mind, especially expensive things or things that the heroes need in order to save the day. The powers of all his friends are equally absurd. The bad guys are all librarians—librarians, for pete’s sake—and every librarian stereotype is employed with menace. These are the kinds of bad guys whose thick glasses and quiet demeanors belie what efficient torturers and murderers they are. The craziness is off the charts.

But none of that matters to our narrator. He calmly asserts that none of it is funny, and that he is no sort of hero, no matter what the events playing out seem to indicate.

And he is not lying.

The Veil is Lifted 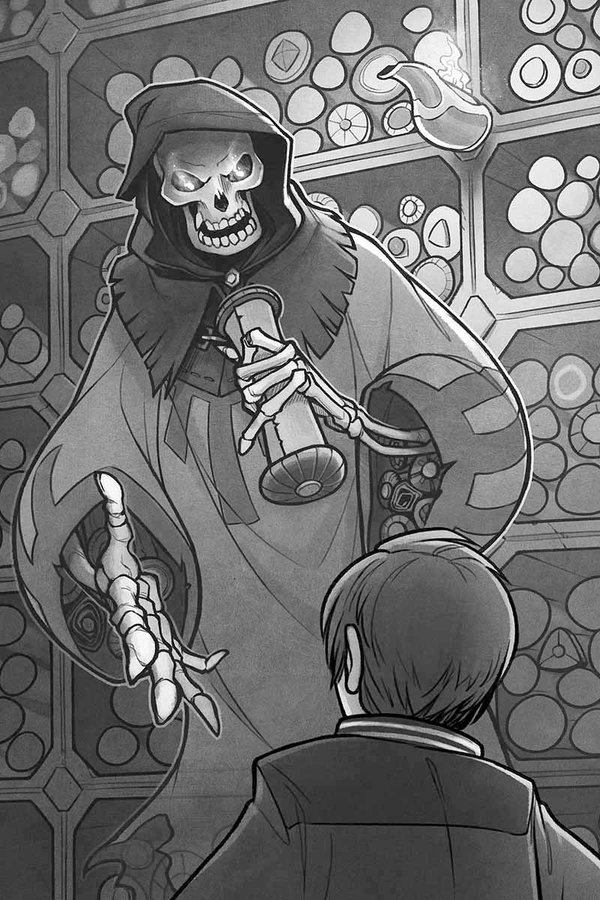 These being Brandon Sanderson books, they are not content to simply repeat the same “Hero’s Journey” story we’ve read over and over again. By the time the second book rolls around, the classic (or cliched) fantasy tropes start to come undone. As we wade deeper into the universe, we discover the following:

Honestly, the effect is more akin to Roald Dahl than J.K. Rowling.

And the strangest part of this is that Alcatraz warns us that it is coming, yet the books are engineered in such a way as to keep us from believing him. We have every hope and expectation that this will turn out just like all our other favorite Middle Grade fantasy adventure stories.

How naive we are.

Playing Tricks on the Reader 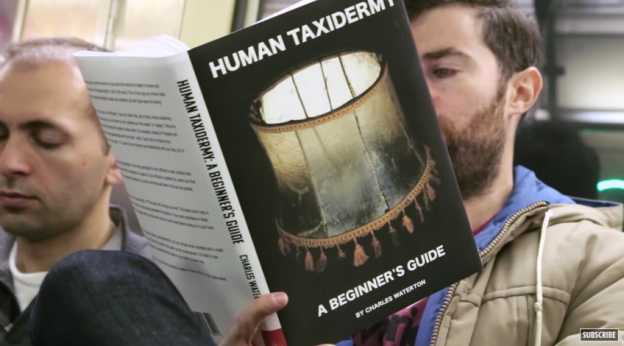 One of the best parts about the Alcatraz series are the chapter openings.

Because none of the chapters picks up where the last one left off. Instead, we are treated to a little soliloquy by Alcatraz himself, where he talks about his life, or fish sticks, or bunnies with bazookas, or whatever is on his mind at the time.

Sometimes, he spends these introductions talking about writing. He gives advice on how to write a story that people will want to read. And while a lot of it is a tongue-in-cheek lampooning of the industry. Some of it is sound and applicable.

He gives advice on, among other things:

Above all else, he lets it be known that he is not there to affirm the reader’s beliefs and opinions. He relishes how cruel he is allowed to be with his readers, leaving characters on cliffhangers and raising open-ended questions that may or may not be answered in the current book. Strangely enough, Alcatraz Smedry understands the Writer is King principle better than anyone else, myself included. He doesn’t apologize and he doesn’t take polls. He insists, again and again, that the reader is wrong in their judgment about him. He affirms that he is a coward.

And the reader, of course, thinks he is merely being modest.

He then announces that he knows that the reader thinks he is merely being modest, and announces, quite plainly, that they are wrong.

And the reader, of course, thinks that he is joking.

He then announces that he knows that the reader thinks he is joking, before announcing that they are wrong to think so.

And the reader thinks it is all “part of the act”.

And then Alcatraz does something to blow all our collective minds.

“I am Your Father” 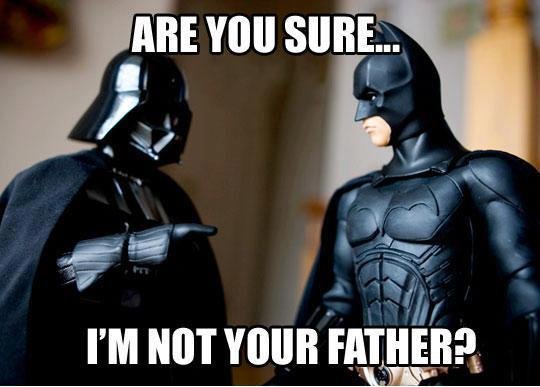 I am going to keep this mostly spoiler-free.

However, I will say that at the end of The Dark Talent, Alcatraz shows us, beyond any doubt, what he has been trying to say from the beginning, and the effect is explosive.

After finishing the last pages, I remember looking back on the entire series, a series I had been reading from its first publication, and watching it transform in front of my eyes.

These books were not comic fantasy. They were about a boy who is suffering from PTSD.

The silly chapter introductions—arguably the best part of this entire series—were not being played for laughs (at least not by Alcatraz). They were his coping mechanism. Each one was designed to point out the absurdity of the situation, but he was never seeing the humor in it. He was just lamenting how doomed it all was from the start. That’s why he kept proclaiming himself a coward. That’s why he kept pointing out how none of it made any sense: he was being nihilistic. For him, none of it was fun.

What a brilliant upset. It’s something no reader would ever have asked for, yet it was something that the story needed. And once it was over it was impossible to see the books in the same way. They were not merely revolutionary in the humor they were peddling but in the story they were telling. They out-Sandersoned Brandon Sanderson.

How is that even possible?

It feels like I could write an entire book about this one plot twist, but then, fish can’t write books. Instead, I will conclude this post by saying that the Alcatraz books are back and better than ever. There will probably never be a better time to get introduced to them.

Go to Amazon. Go to Barnes and Noble. Go to your local Mom-and-Pop bookstore. I don’t care what method you use. Just get these books into your home library right now.

Also, don’t be afraid to read them as an adult. They are not just marketed as Middle Grade books; they are Middle Grade books, but don’t let that stop you from enjoying them. Because enjoyment is the primary response to reading them, no matter how old you are.

Let’s get enough buzz going for Dreamworks to reconsider what might have been.

[This week’s tagline: “Where people come…late.”]