Edgar Wright is a living treasure.

He knows how to make dastardly good comedies, and that’s what we get with his satirical take on police movies, which most of us call Hot Fuzz. 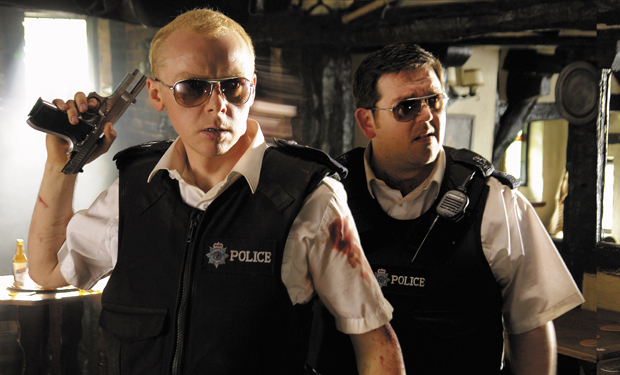 Let’s get something important out of the way, first.

I go out of my way to avoid watching R-rated movies. No matter what we tell ourselves, the media we consume has a powerful effect on us, and I’ve seen too many films that have been steeped in exploitation, then justify it by calling themselves “edgy” and “liberated”.

This is doubly true for R-rated comedies. The few times I have indulged in such, I cannot help but notice that those scenes that earned them the “R” were the least funny moments in the entire film. The problem is even worse in those “special unrated edition” versions of otherwise-rated films. Honestly, when a scene is cut from a movie, 90% of the time it means that the scene is not good. Putting it back in does not improve the experience.

However, I had watched bits and pieces of Hot Fuzz on TV, and I saw it was on Netflix, so I decided to see for myself if the R-rating was justified. Happily, I discovered that it largely wasn’t.

However, you should be advised that this film contains the following:

If none of these things bother you, then you should be fine.

Nicholas Angel is the toughest and most straitlaced police officer in London. He is so exceptional, in fact, that no one else on the force can stand him, and he quickly gets transferred to the sleepy English town of Sandford, where he becomes an instant celebrity among the local police, who think he might be one of those super-tough cops from the movies.

But the town is too much of a tight fit for Angel, who cannot abide by its slow pace and lack of crime. Sandford has not had a murder in decades, but accidental deaths are strangely on the rise, each one more grisly than the last. Something is rotten in this quaint little village, and there’s no telling just how deep the truth is buried.

Two things to keep in mind about Hot Fuzz:

You should also remember that this film is satirizing cop movies. The filmmakers reportedly used more than 100 different action movies as inspiration. The more familiar you are with cop movies, the more enjoyment you will get out of this.

I want so much to tell you more about the story, but, among other things, this film is a murder mystery. It would be a disservice to reveal too much. Suffice it to say that the plot is very well written, and the final reveal is both laugh-out-loud funny and a twist you will never see coming. 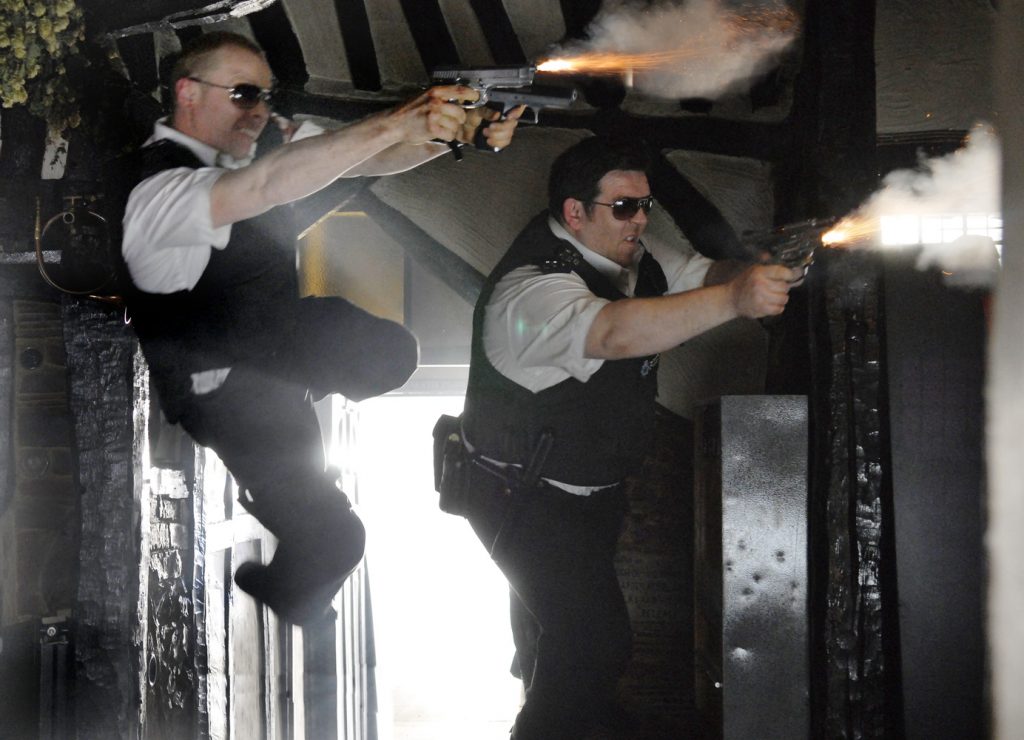 Not that I am authorized to speak for all police officers everywhere, but a disproportionate number of them give high praise to this film, because it lampoons all the ways that other cop movies are wrong about what it’s like to be a policeman. And because it takes the time to show that one, most important aspect of policing:

Nicholas Angel, being the diligent officer that he is, never fails to fill out his paperwork, and the film never fails to show him putting in the time to do it (though it uses Edgar Wright’s signature editing style to fast forward through the boring parts while, at the same time, making them seem heavier).

The fact that this movie gets so many nods from real police officers may not be proof of its accuracy, but it is telling of the film’s quality, like a badge of honor.

Hot Fuzz is an explosive comedy where the viewer will instantly relate to the frustrations of the protagonist. It may be Edgar Wright’s second-best film, after Scott Pilgrim vs. The World (and I am not counting Ant Man in the running because Edgar Wright only directed part of that). The film’s R-rating is barely justified, and can in most cases be overlooked if the audience has the maturity for it (e.g. I would not hesitate to show this movie to some of the more enlightened teens in the world).

As of this writing, the movie is on Netflix, though who can say for how long? Be sure to catch it before it’s gone.